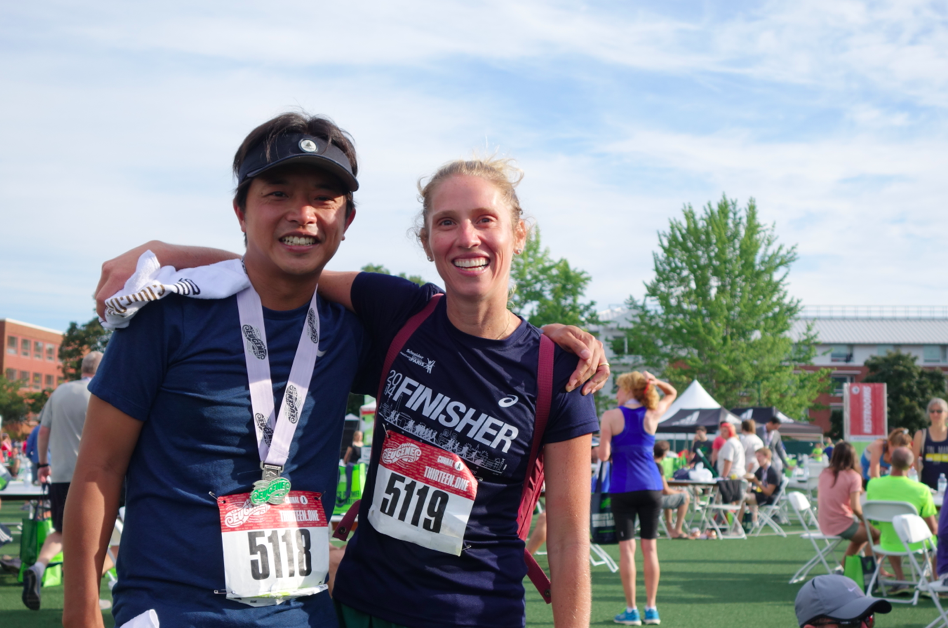 As Ken told me at the Butte to Butte, “Going to a road race in Eugene is like attending a hedge fund conference in NYC.  Everyone feels at home.” And he is so right! Eugene, Oregon is “Track Town USA.” Most everyone is sporty and either bikes, runs, or does both. Eugene frequently hosts the Track and Field Olympic Trials (in 1972, 1976, 1980, 2008 and 2012, and will host again in 2016). Additionally, it is the birthplace of Nike, Steve Prefontaine, and the historic Hayward Field. 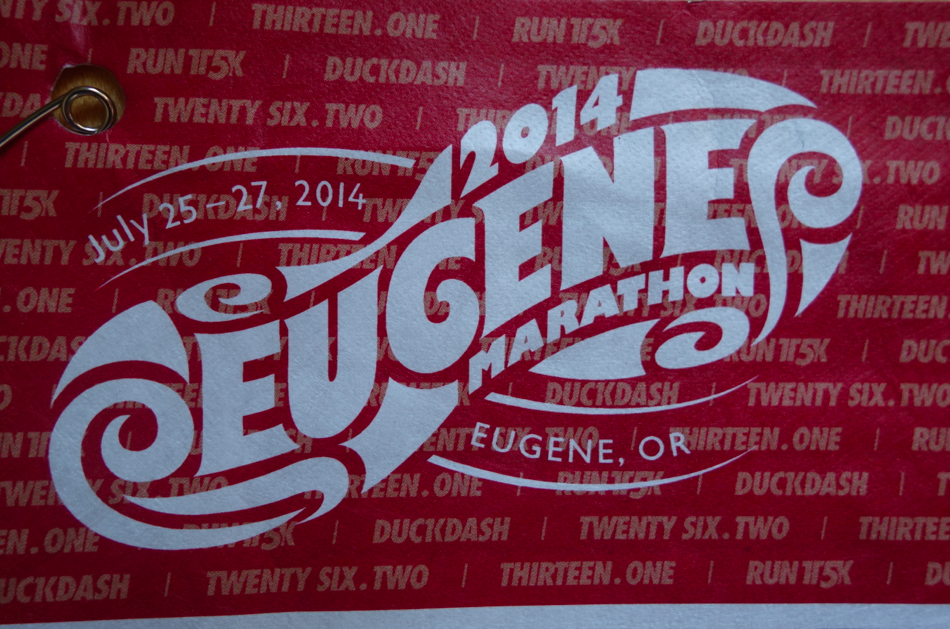 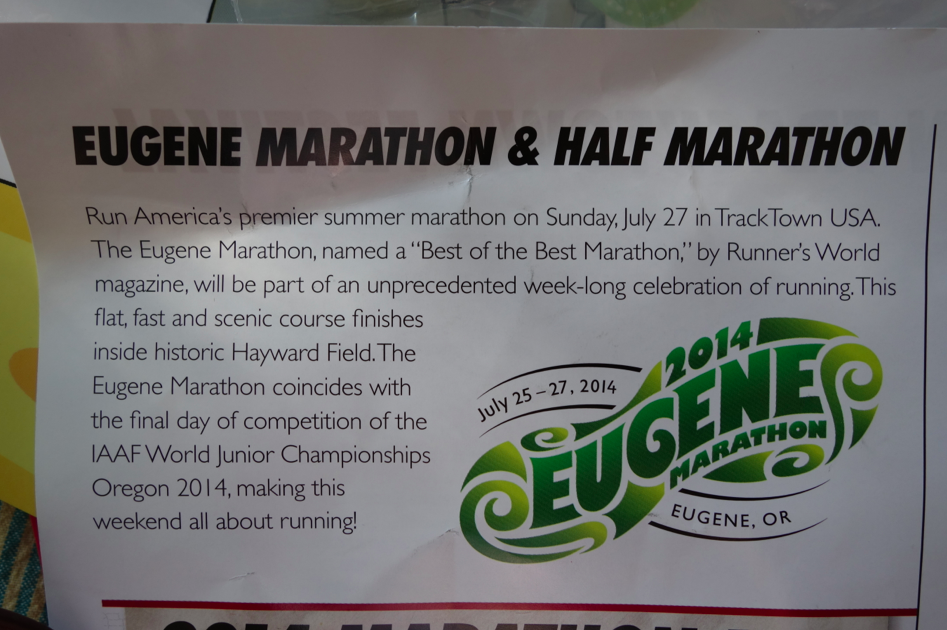 Options: half or full.  We went half.

So there’s nothing better than joining in with the Eugenians… when in Rome, do what the Romans do! Of course, running with Eugenians is a humble wake up call. Everyone runs, everyone kicks butt, and everyone is fast. So although one might think they are fast, when running in Eugene, not so much….people know how to BOOK it here. 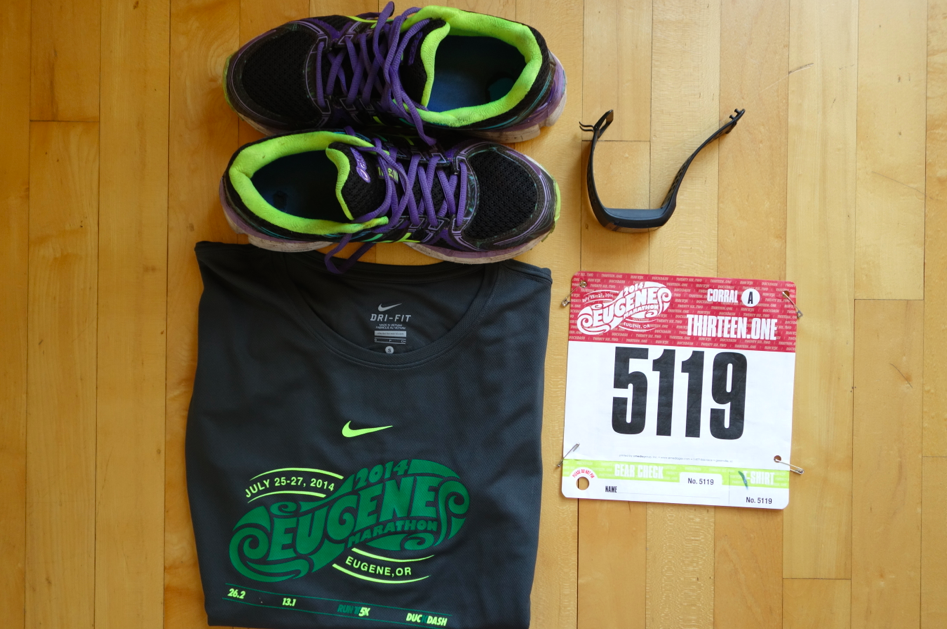 Gear. Or kind half there gear. Missing shorts, sports bra, and GU. Well, at least I tried to be prepared.

Ken and I had an amazing time running the race yesterday.  And what a beautiful day it was. The race — both the half and full marathon — started at the same place and were together until the split off at mile 10. The run began at 6 am (SAY WHAT???? Wake up time was a good ‘ol 4:00 am) and therefore didn’t take up a big chunk of the day. It also meant that we were able to enjoy pancakes, beer, and the sunrise early on in the day. 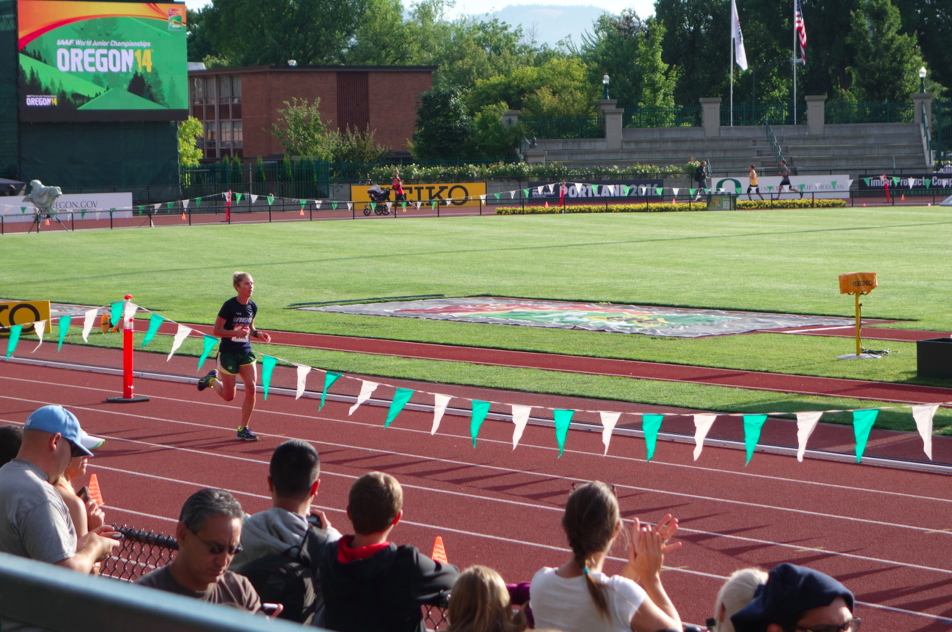 That is me, running (both the half and the full end up with a lap around historic Hayward Field- pretty awesome.) Thanks, Papa Proskurowski, for taking the pictures and meeting us at the finish line. Much appreciated! 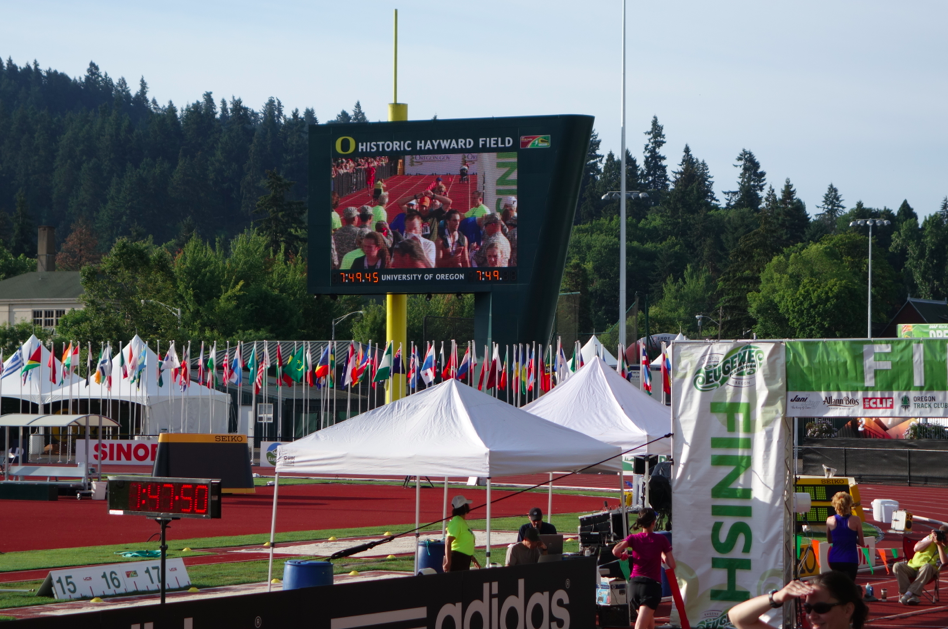 How cool to see yourself on the BIG screen at a race? So neat. 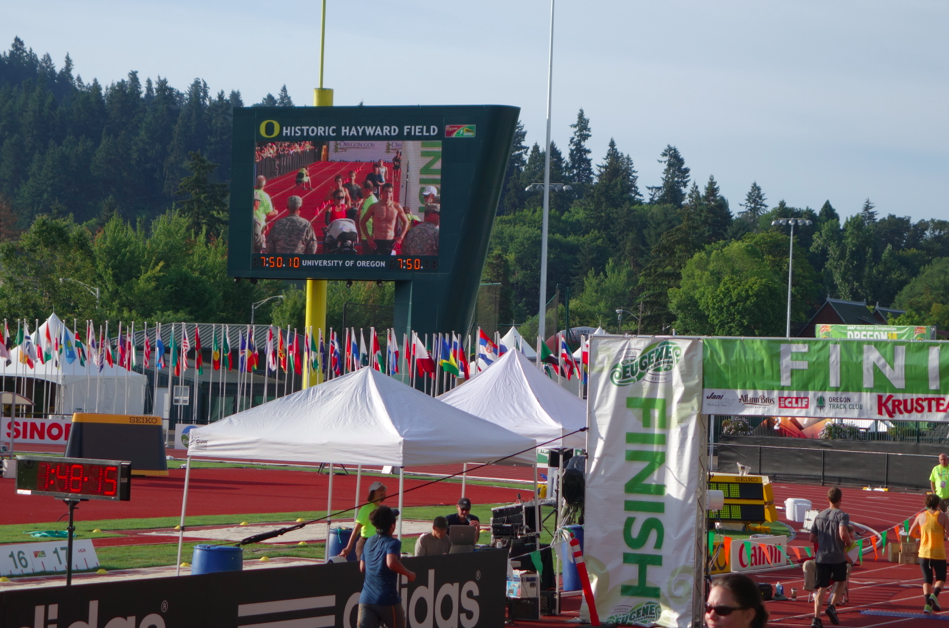 Do you see the man booking in blue? THAT dude is my husband. Yep, he “trained” by running twice before the half marathon. And he almost beat me. It is embarrassing. I have been training and running my tush off during the week and then he came out to Oregon with two runs under his belt, and he KICKED A$$. Like seriously, unbelievable. I sped up the last three miles (I saw him at mile 11) and I pushed myself to pick up the pace because the last thing I wanted was him to beat me. It is humbling enough for him to be in the same minute finish…Awesome job, Babers! So insanely proud of you.

The 13.1 mile course went through the University of Oregon, Amazon Park, Alton Baker Park East and across the beautiful Willamette River (twice!) on the way to a spectacular finish through the arches of Powell Plaza and the final stretch on the track at Hayward Field. A great route, although different from the Paris marathon, still scenic and beautiful. The Eugene Marathon has been cited as the “Best New Marathon” by Runners Magazine in 2013, and was super fun to run. Felt a strong Oregon and Eugene pride while running in my hometown. I love this place. 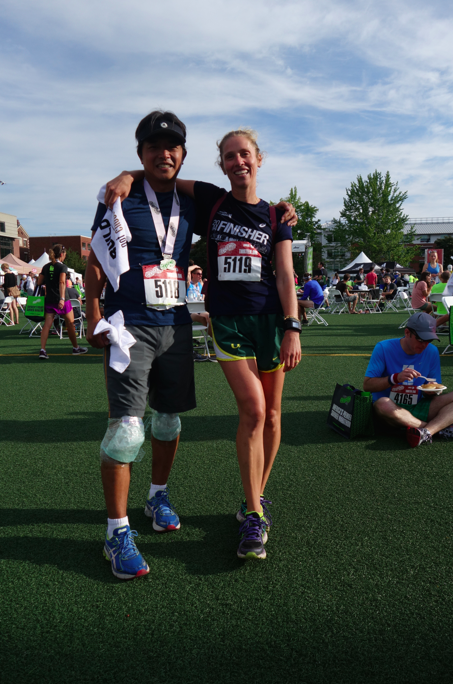 The couple that runs together, stays together.

Yesterday made me proud to be a runner, but more importantly, a Eugenian.  And my poor husband had to take a redeye back to New York last night and is probably back in the office as we speak. BUT HE KICKED bootie. So it is all worth it. 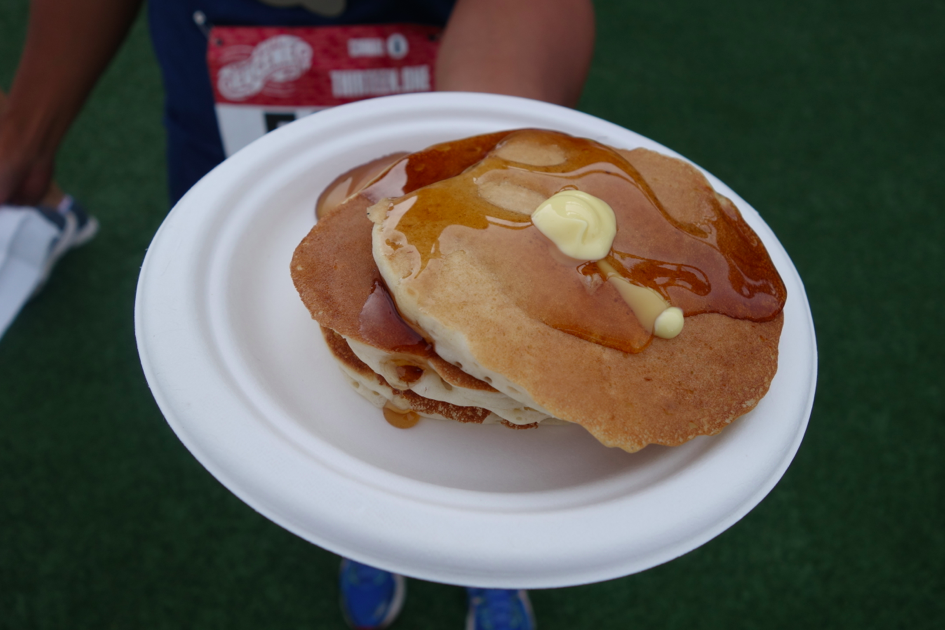 Yep, they served pancakes after the race. (Doesn’t it look like an advertisement? Just the right amount of butter and syrup). 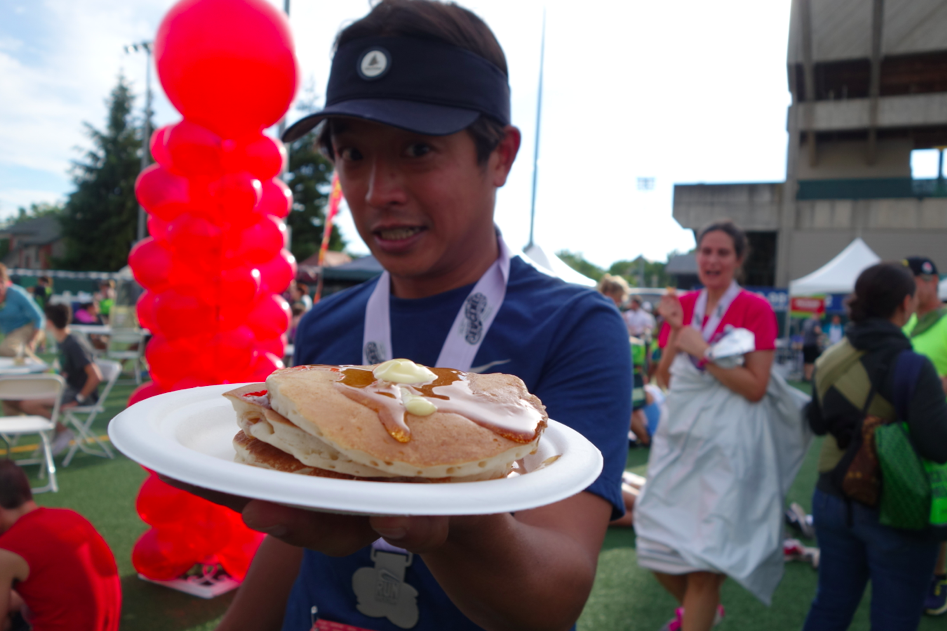 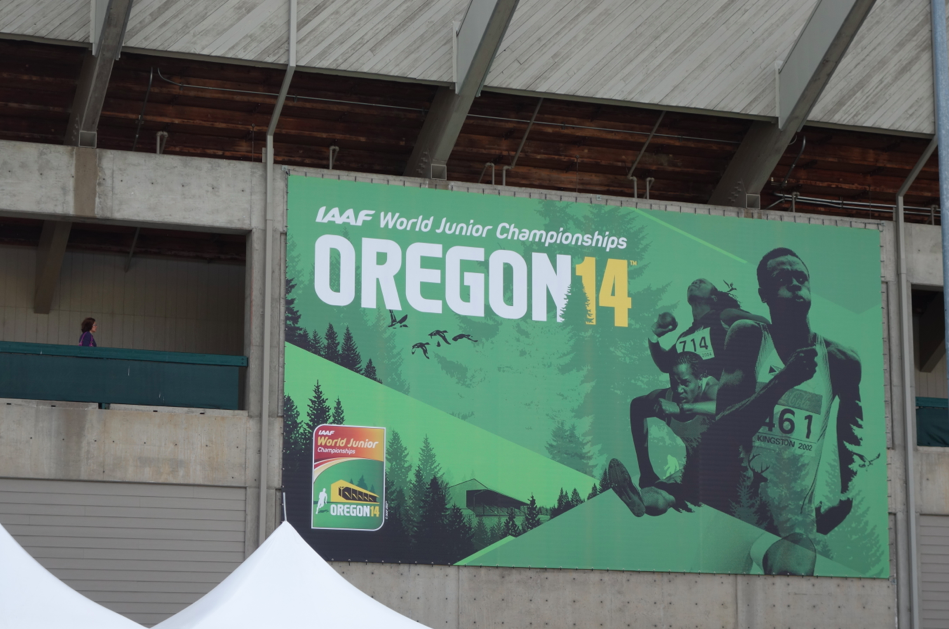 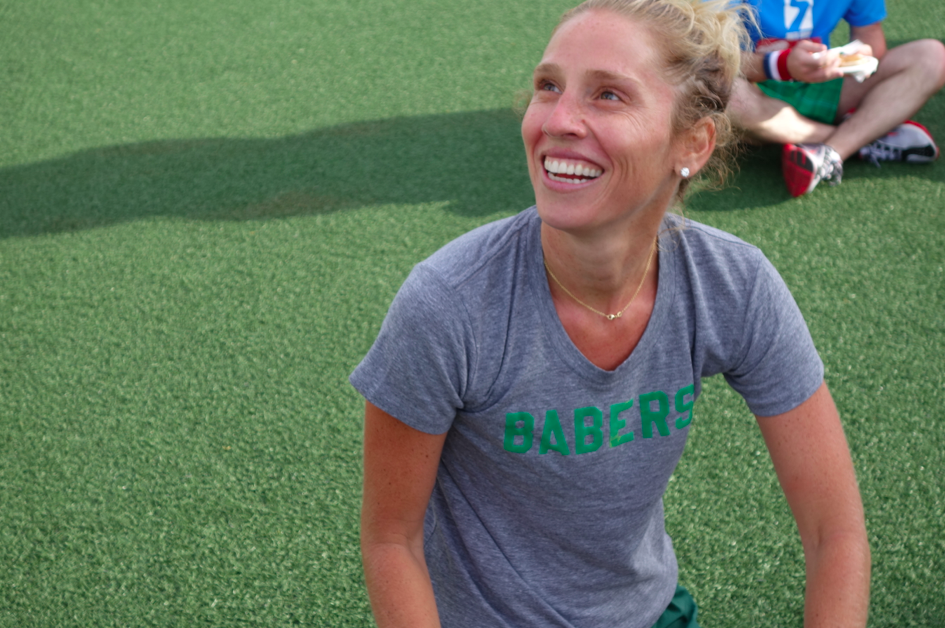 A fresh, clean (and most importantly, dry) shirt at the end of the race. BABERS! 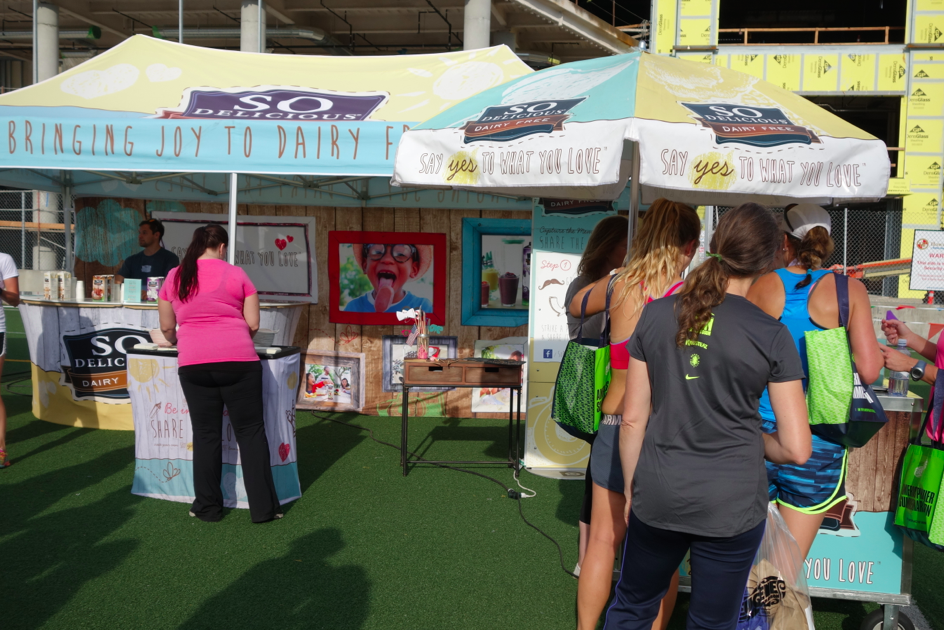 So Delicious (a company based in Eugene) served free coconut-milk yogurt and coconut-milk ice cream. Gotta love it. 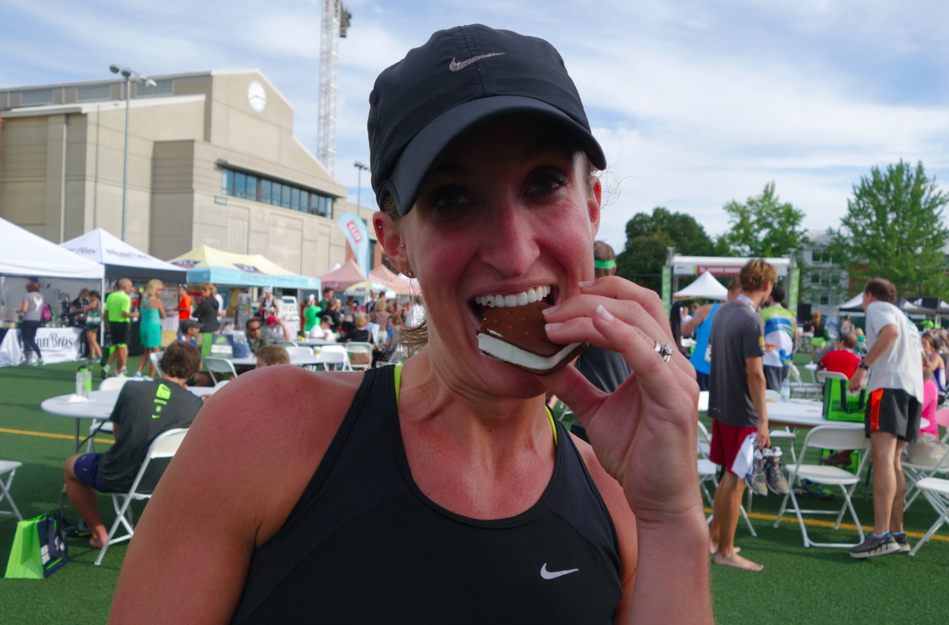 My friend Katy (#1 tennis player from my High School team) pushed me through the race and was awesome to run with. Thank you! Katy is also a teacher and an avid runner. My goal was to keep up with her  (I couldn’t sleep at night because I was worried I wouldn’t be able to hang with her fast running skills)… And here she is gobbling up an ice cream sandwich, because WHY NOT? 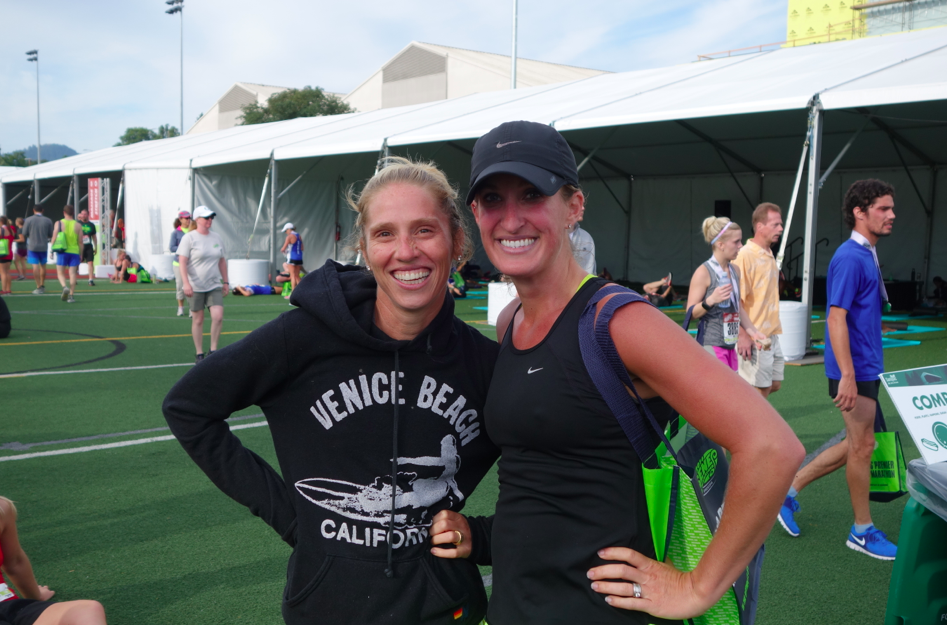 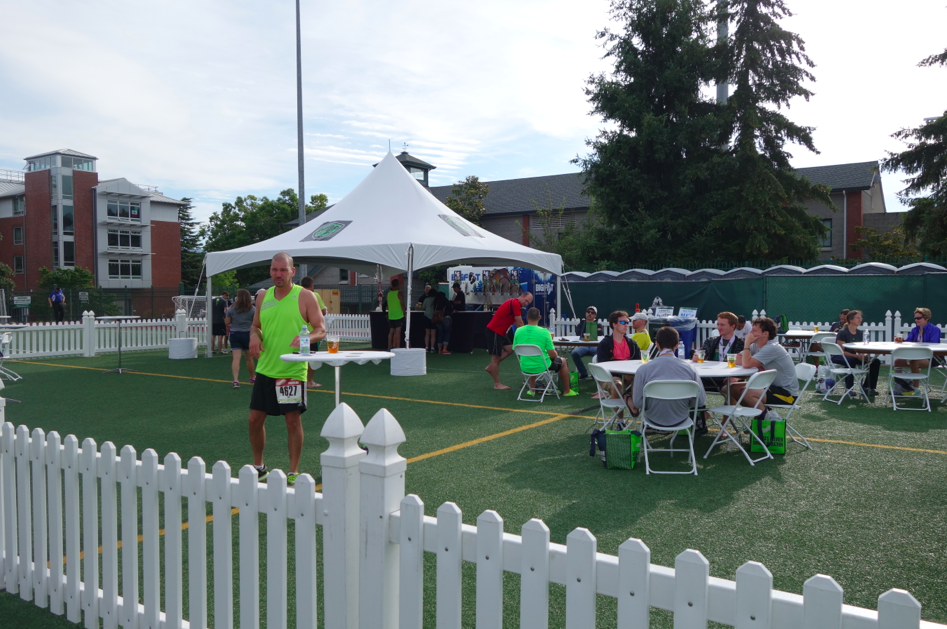 A beer garden (yep at 8 am) serving beer. We would have drank some if it didn’t cost money. Highway robbery. 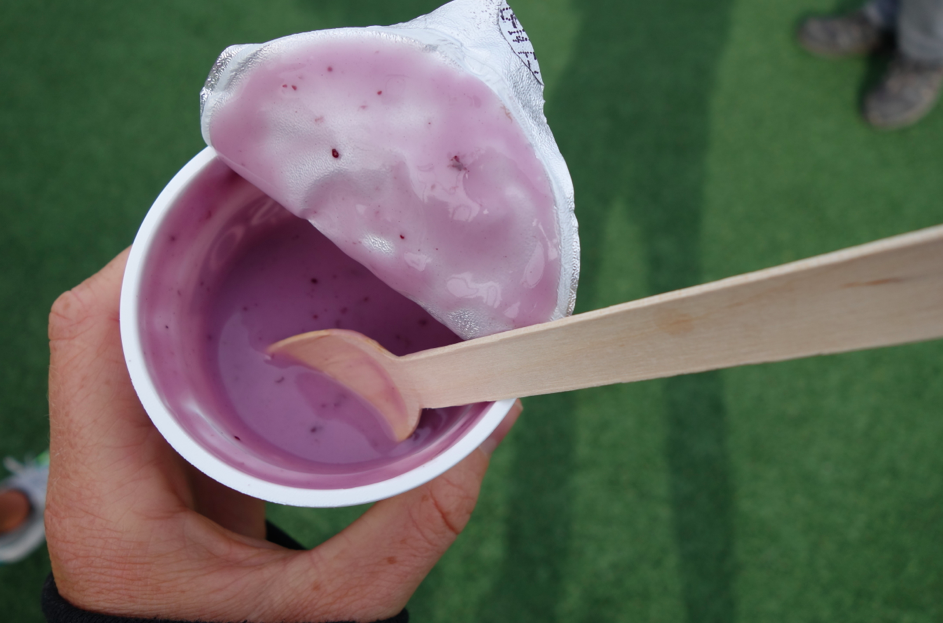 Yogurt does a body good. 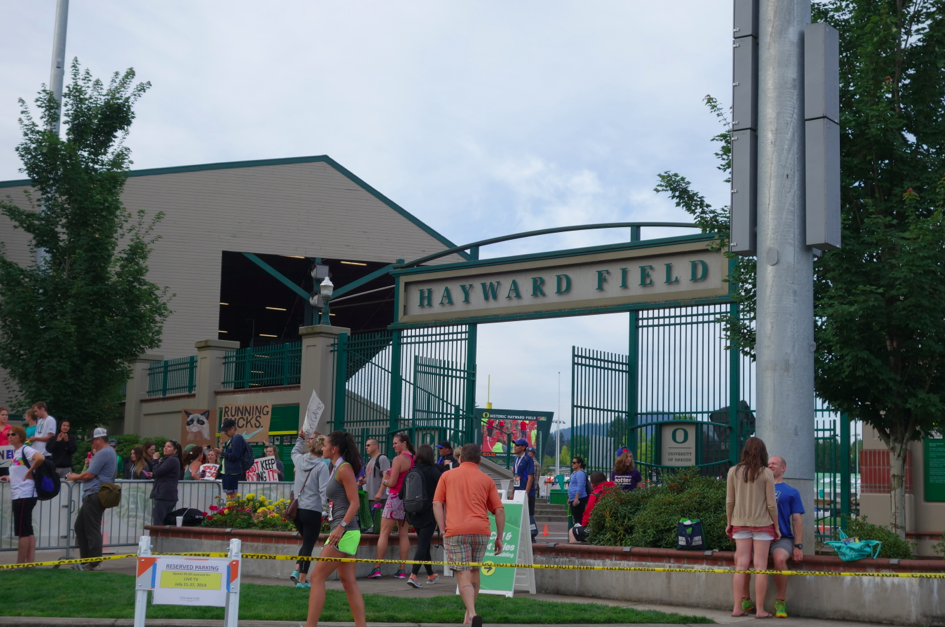 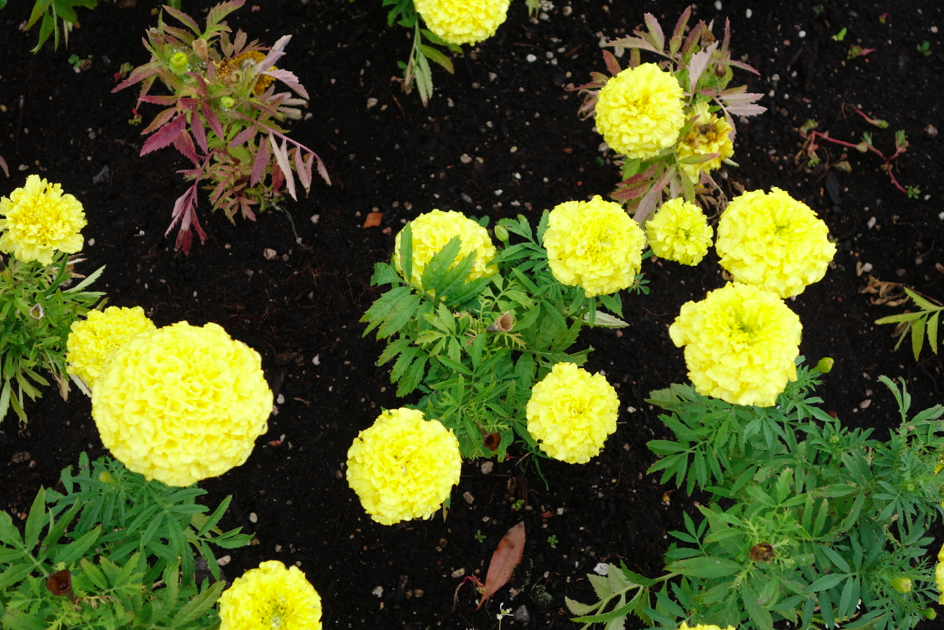 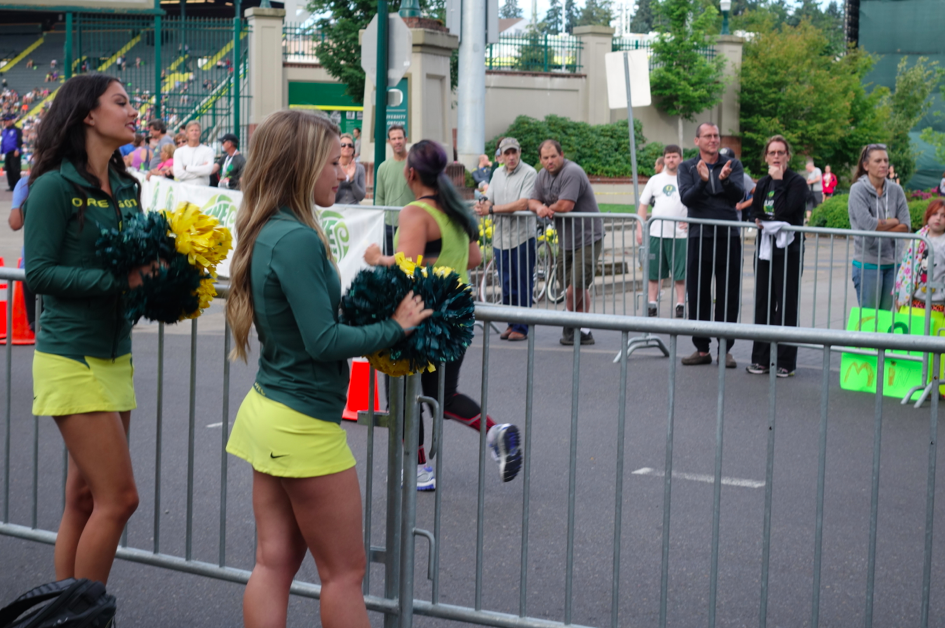 University of Oregon cheerleaders cheering people at the finish line (entrance to Hayward Field for the last couple hundred meters). 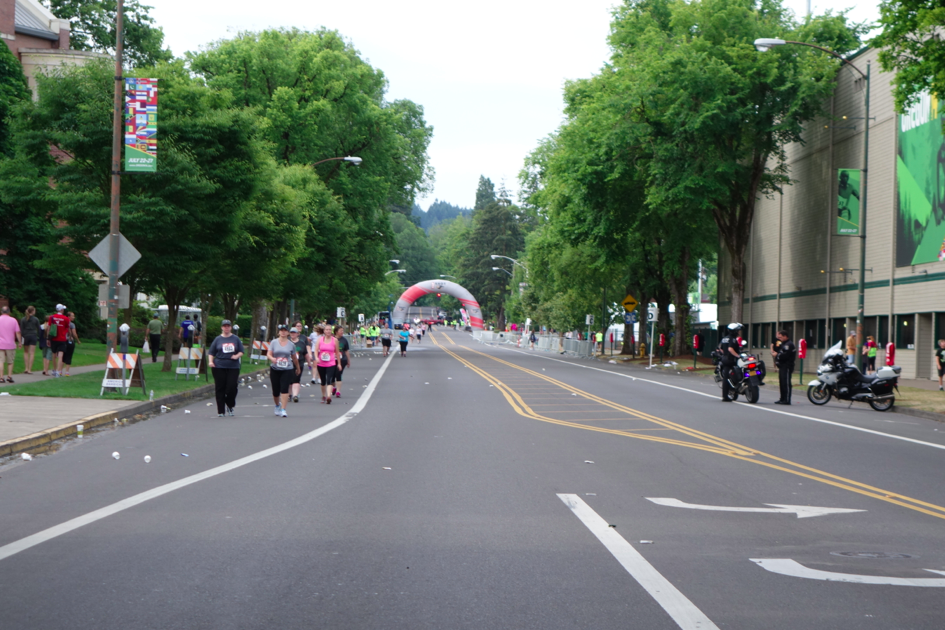 The start (taken after we finished). Love the green in Eugene. 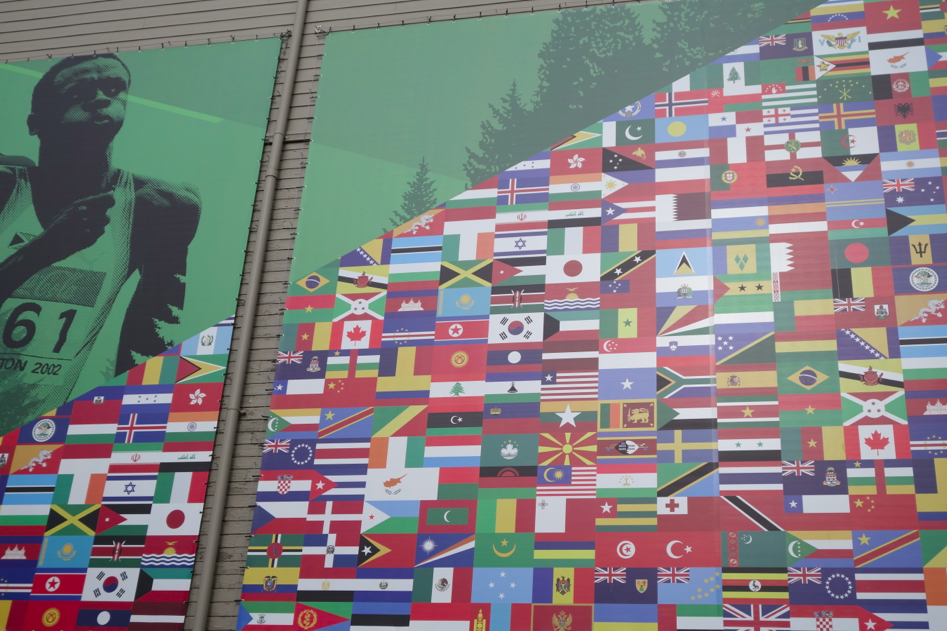 World flags on side of Hayward Field. 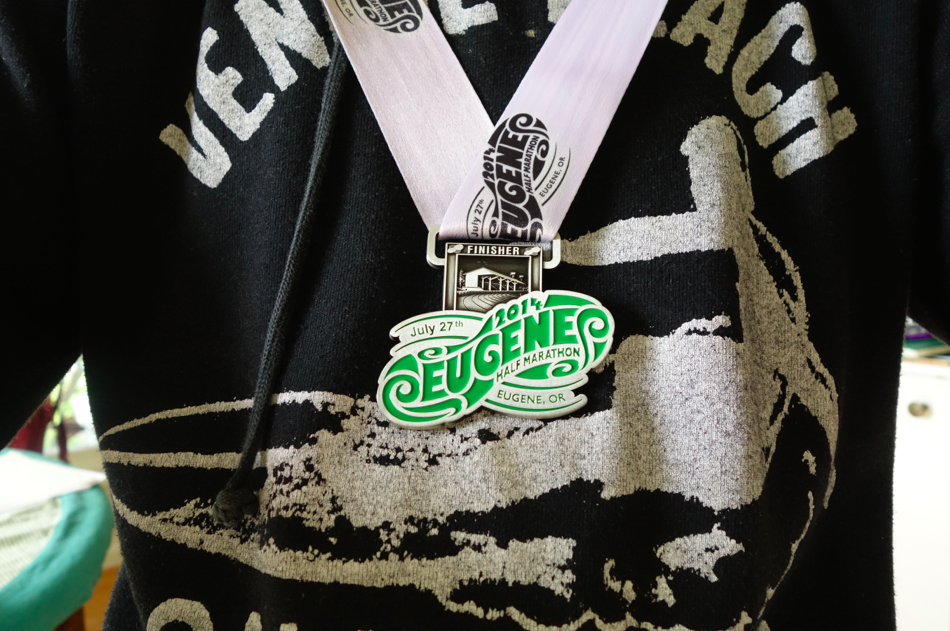 Medal on my neck. Happy. 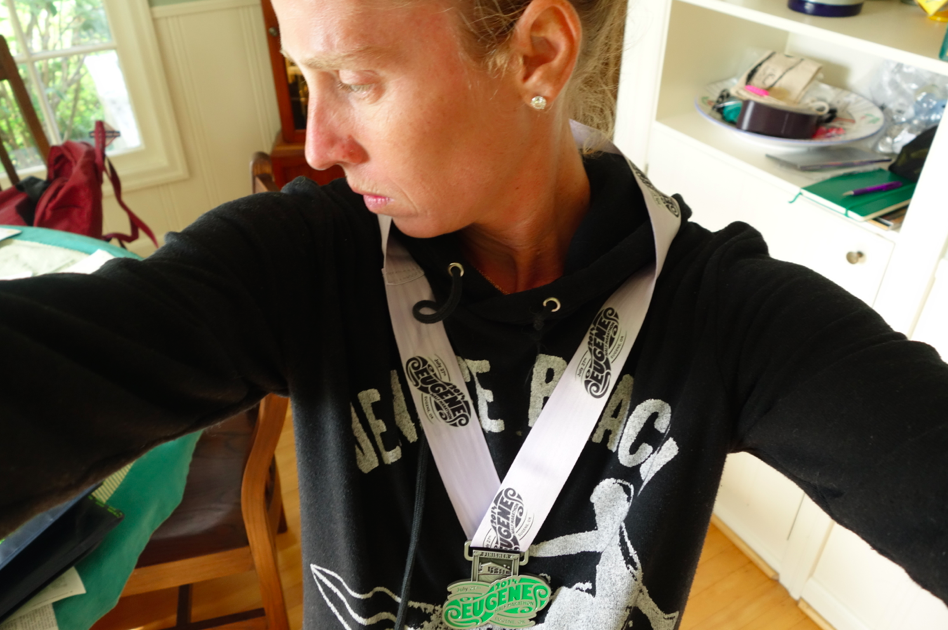 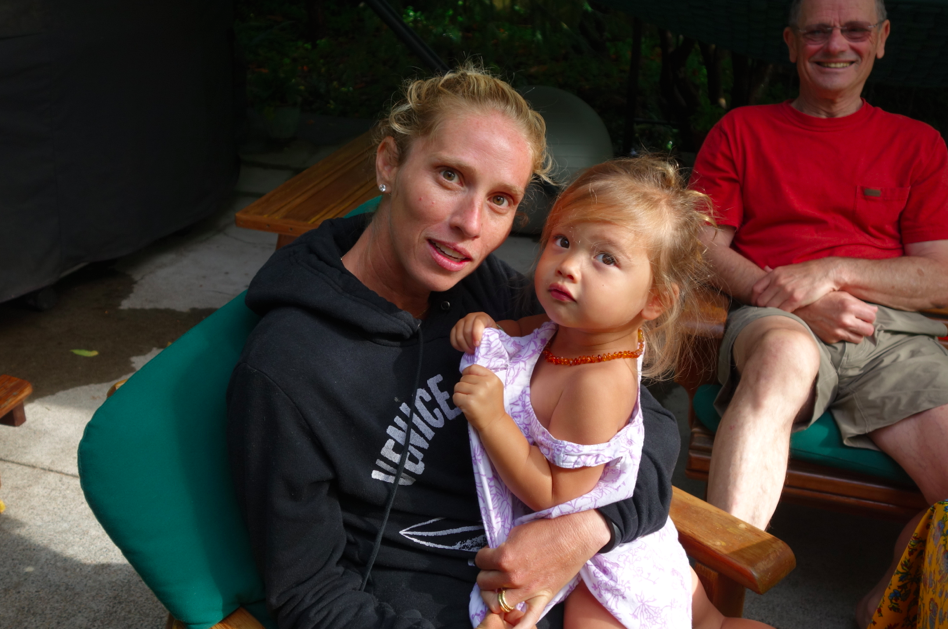 Baby girl with Papa in the background. Unshowered and hungry (but caffeinated from the post-race coffee). Thank goodness.

All in all, a great run and morning. Who wants to run again next year? Have a great start to your week.