I attended my first zoom wedding this weekend, which happened to be my sister Courtney’s. Courtney and her now-husband-Evan had planned a small wedding for May 9th with their 3 month old son Alston, and Courtney’s two stepdaughters at their newly finished built home. Unfortunately due to COVID, they had to cancel the in-person ceremony but decided to do it over zoom. Totally zoomed out with the kids’ remote learning, rollerskating, tutoring, I was a little skeptical of how this would take place. But HOLY COW, it went above and beyond any of my expectations. It was extremely beautiful, really emotional, and a uniquely special and intimate experience. There were many many tears and it will forever be a wedding I will never forget. Congratulations, Court and Evan — love you both so much! 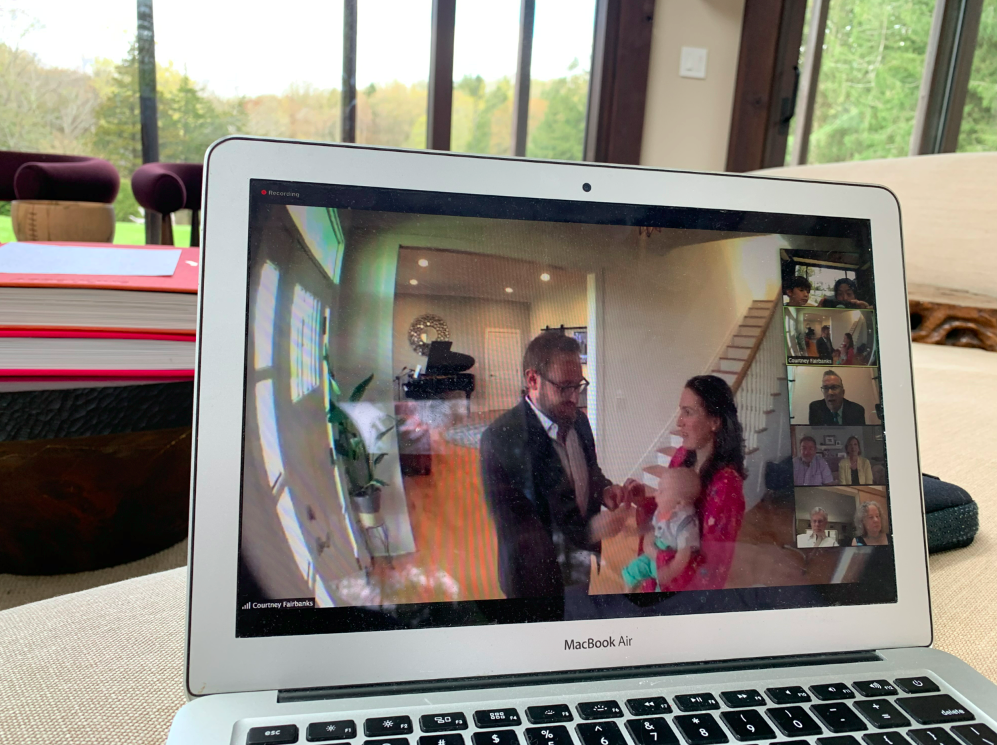 Courtney is biologically my cousin, but in 1995, her parents (and middle sister) were killed in a tragic car accident. So Courtney and Galen moved from California to Oregon to be raised by my parents. Courtney was 15 at the time, and Galen was 8. In honor of Courtney’s mom, she wore her mom’s original wedding dress. Seeing her walk down the stairs in the Mexican Pink Hippy dress brought tears to us all — it was a way of including her parents when they could not be there. 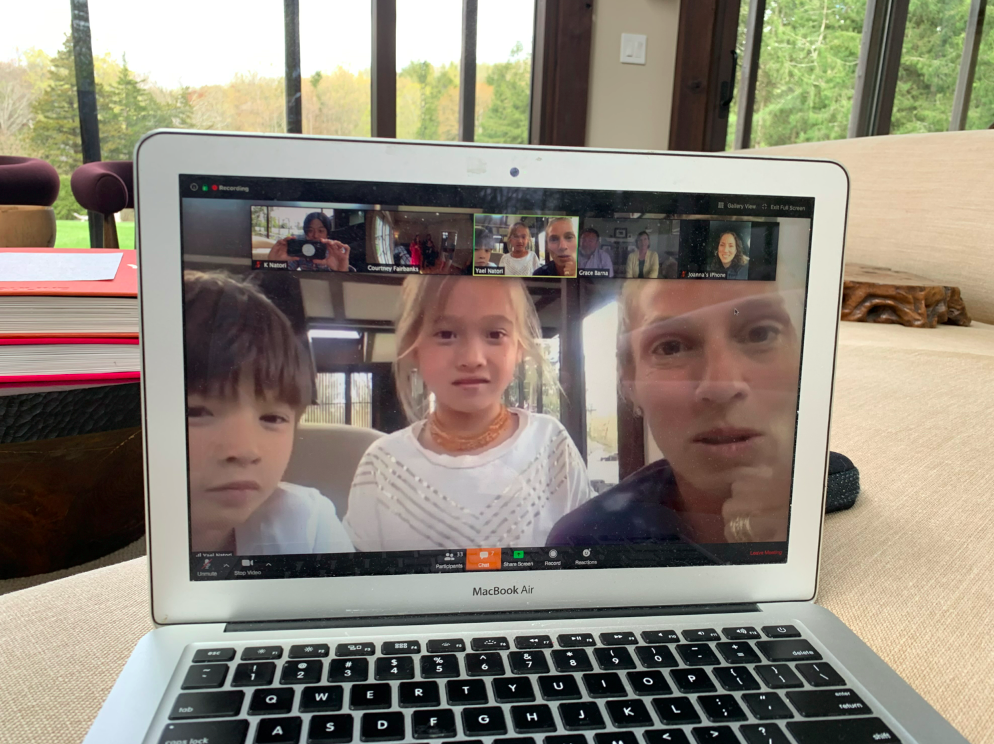 The four of us were “present” at the wedding — on separate computers but in the same room — the kids moved between the screens. I sadly did not dress up (does tie dye count as dress up?) 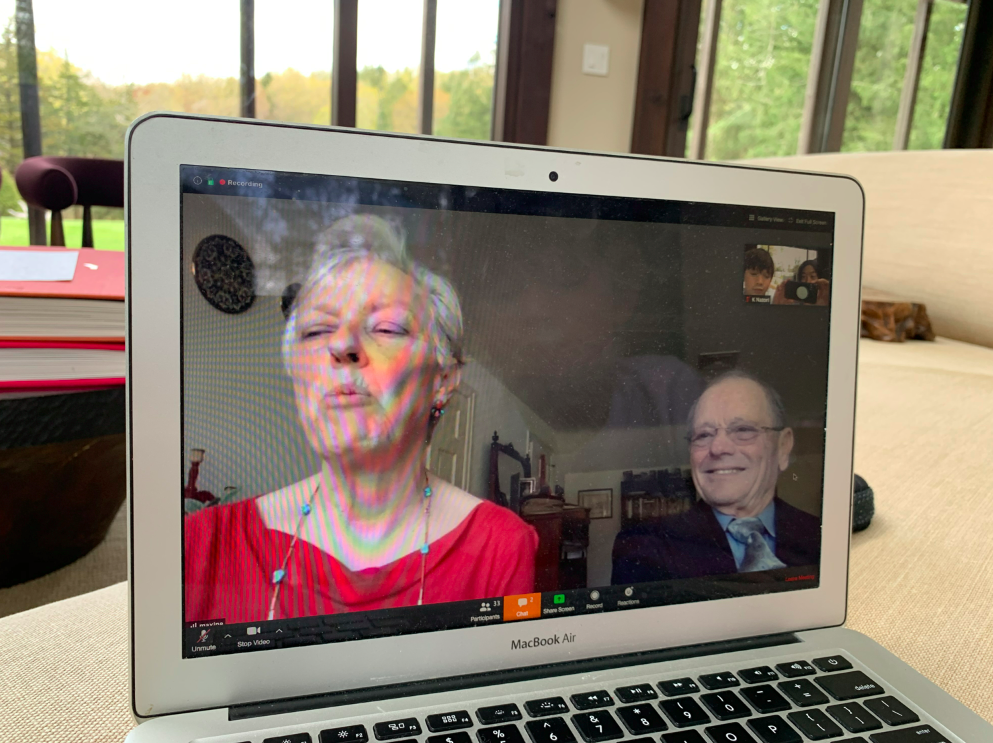 My parents were the first to give a toast — and man, did the tears flow. Both my parents are expressive, articulate, and wise. My mom threw in ABBA (the Swedish pop group) to Native American blessings — bringing Courtney’s parents, her Mexican heritage, and the future. I think most people were crying during her speech — extremely powerful. After my parent’s speech and Evan’s parents’ speeches, it was open for other toasts. I had no idea that (a) it would be so emotional (b) I was going to give a toast. But I did. I wanted to make it known that Courtney has been an incredibly loving sister and aunt for the past 24 years and a valuable member of our family. Unlike my parents, I had not planned it and wish I had. 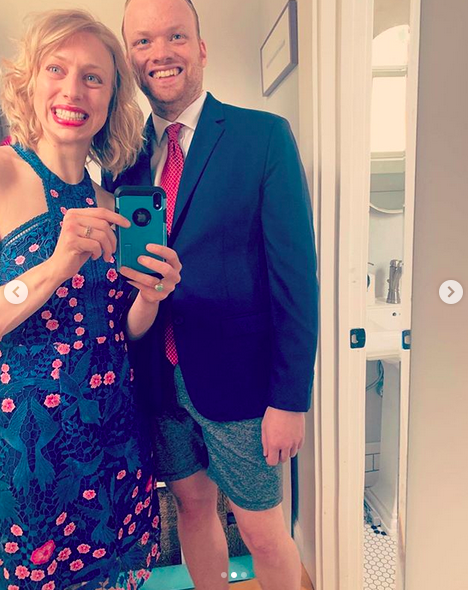 My other sister, Galen, and her husband Carl got all dressed up for Zoom (hence the boxers and the blazer). Galen gave a very touching and emotional toast — lots of kleenex used for her speech too.

So even during this pandemic, we had quite an eventful weekend (with doing nothing for any of them) — my mother in law’s 73rd birthday, my sister’s wedding, Mother’s Day, and Tusia’s 8th birthday. It is during these times — the happiness and the celebration — that I think of those who . Mother’s Day is a hard day for so many — and since we have an unconventional family, I feel it and felt it. And on this special wedding day, we celebrated Courtney and Evan’s love and family but noticed the absence of her own biological parents. So much to be thankful for, and yet, there was sadness and pain. That said, we love you Court and Evan and were so happy to be a part of your special day and can’t wait to celebrate in person when the time comes.