I love my friends, and I love my friends’ friends! So it is no surprise that I now have a crush on chef / author / food expert / culinary entrepreneur, Kenny Lao, who I met through a mutual good friend, Lynn. I had the opportunity to interview Kenny, and hear more about his book Hey There, Dumpling! Take a look. 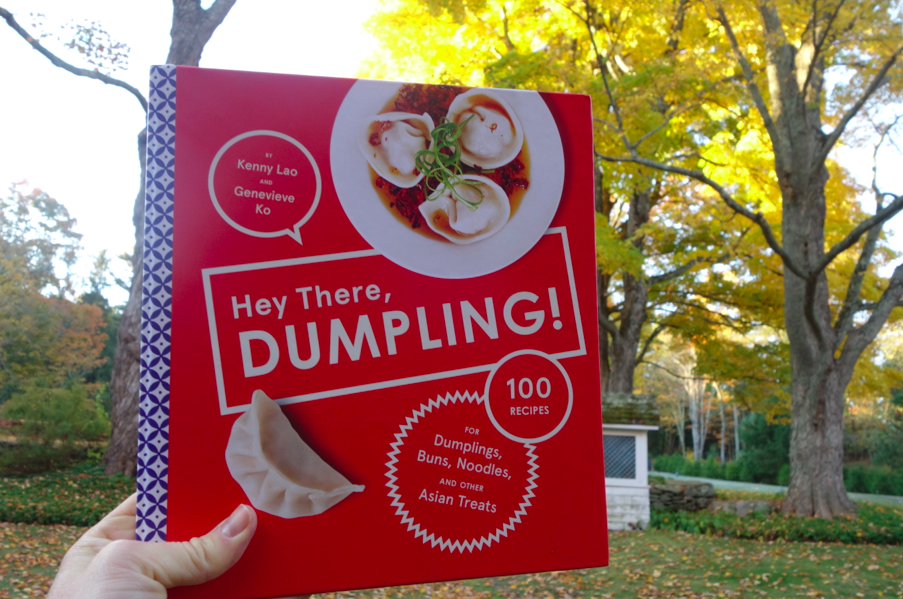 Confession: I was scared to buy this book as making dumplings seem a little “advanced” and “sophisticated,” But as soon as I opened the cookbook, I couldn’t put it down. Every page of the book was fascinating and interesting. RUN AND BUY IT. AND COOK THESE DUMPLINGS.

KKL: I would say my favorite dumpling is probably the Classic Pork + Chive.  It’s the one you can eat everyday.  It’s like the vanilla ice cream of dumplings.  My favorite recipe in the book is probably the lobster wonton in corn chowder.  It is such an awesome take on summer!

Your new cookbook just came out — what was the process like for you creating the book  (Fun / stressful / exciting / slow)?

KKL: As a cookbook first-timer, I could not have done it without my co-author, Genevieve Ko.  She guided me through the whole process like a pro.  She gave me great benchmarks and what was ‘typical’ in the business and what was not.  She was a mentor, a listener and a thought partner. 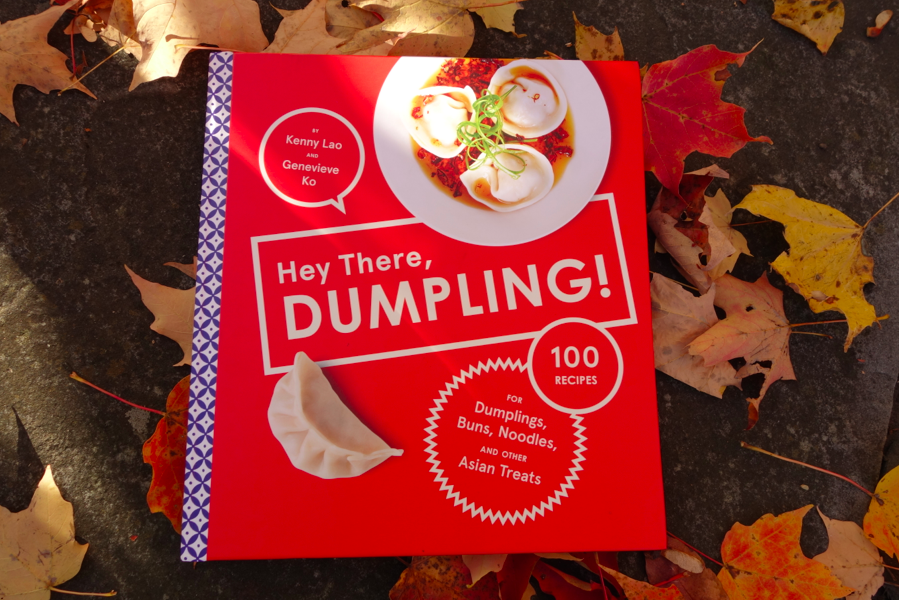 Things that I observed or learned along the way:

* There are so, so, so many talented, smart and creative people that touch every book that makes it to market.  It is an industry that has been forced to act like a business but an industry full of artists and their largest fans.  It was amazing to be so warmly included into that world.  My editor at Abrams, Camaren Subhiyah led the way on thoughtfulness, care and understanding.

* I learned to respect the recipe.  As an intuitive home cook, I cut my teeth on the Joy of Cooking, pre-digital.  As a front-of-house restaurant vet, and an intuitive home cook before writing this cookbook, I would typically read the ingredients, cook method and rough order or process of steps then wing it to taste.  After working with Genevieve to nail every recipe to just the way we wanted it, I now cook line by line from a recipe and really want to understand what that chef’s vision is with her measurements.

You have 100 recipes for dumplings (impressive!), what is key about making the dumplings (technique on folding, ingredients, etc..)? 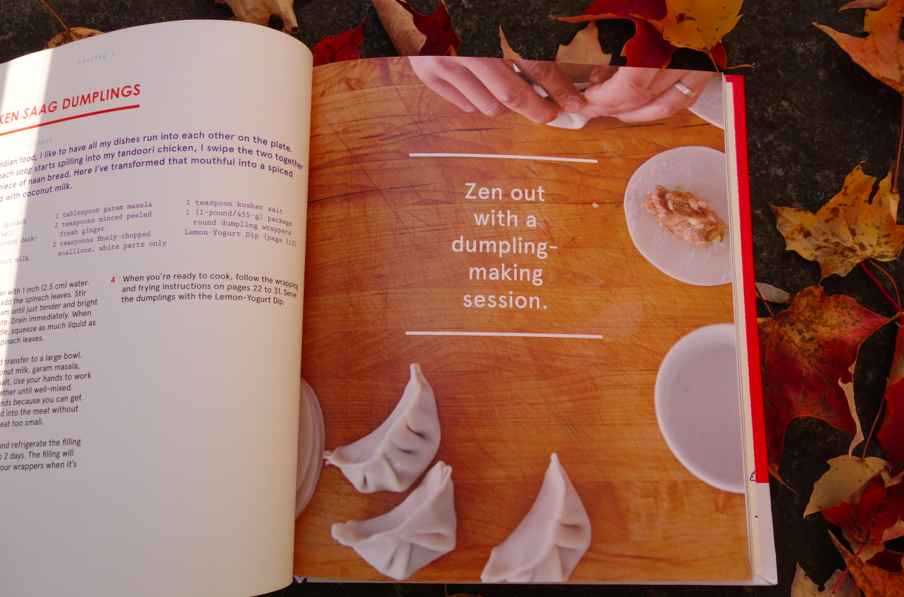 KKL: I know, so many recipes. Folding dumplings can be a very zen process.  After making the filling, the wrapping part is the magical part.  For some wrapping can become an obsession, for some it is calming, for others it is akin to edible arts and crafts.  However you wrap it, make sure the dumpling is sealed, because steam does not care how pretty the fold on the top of your dumpling is, it only cares if you are sealed.  Makes sure the dumplings are sealed tight…and out of sight!

Do you suggest that people first start making dumplings with store-bought dumpling paper or do you make everything from scratch? 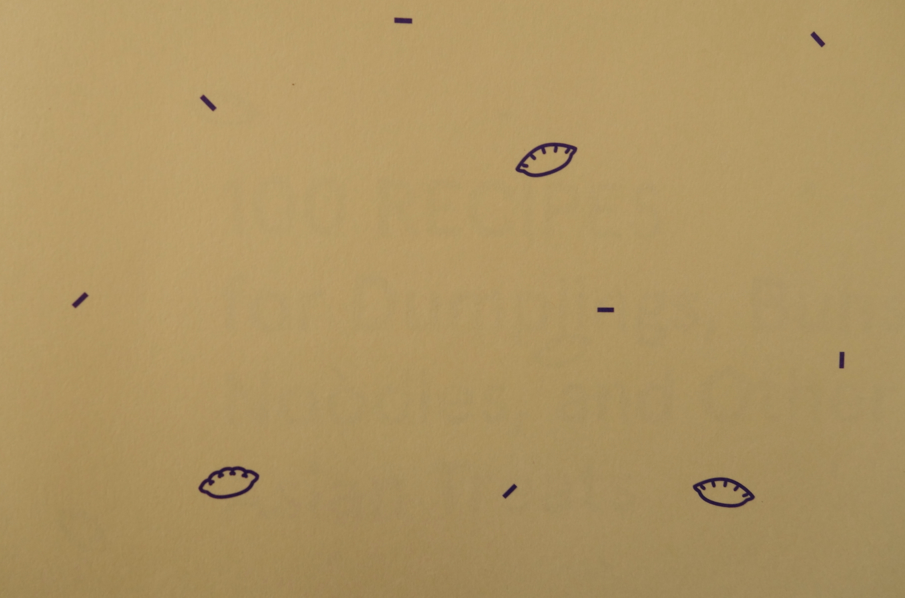 KKL: Working with dough and making dumpling wrappers at home is so fun!  It is seriously, flour and hot water, stirred into a bowl with chopsticks and kneaded out.  Easy, Pea-sy.  That being said it requires a bit of room and can be seen by some as a commitment.  Buy wrappers from an Asian market, some Whole Foods now carry wrappers as well in their frozen aisle.  I like to buy a few at a time and keep them in the freezer and the day before I know I am making dumplings, stick them in the fridge to slack off.

You had an extremely successful run with Rickshaw Dumpling Bar and Trucks. What do you miss? What is next?

KKL: I miss my staff and the customers.  My husband won’t let me own anything right now so I have been helping others with their culinary dreams!  I have been working with clients that are either developing their own concepts or in the process of expansion and need some guidance…or as my husband says, ‘some bossing around!’

What was the biggest takeaway from your 10-years as a restaurant and food truck owner?

KKL: Get to your corner early, open on time.

Do you still cook dumplings at home?

KKL: We cook vegetarian mainly at home and I love making the Lentil Spinach Momo’s in the book.  They are such a nice warm, hearty fall meal in themselves

When cooking for a dinner party, is there a good dessert that goes well with dumplings? 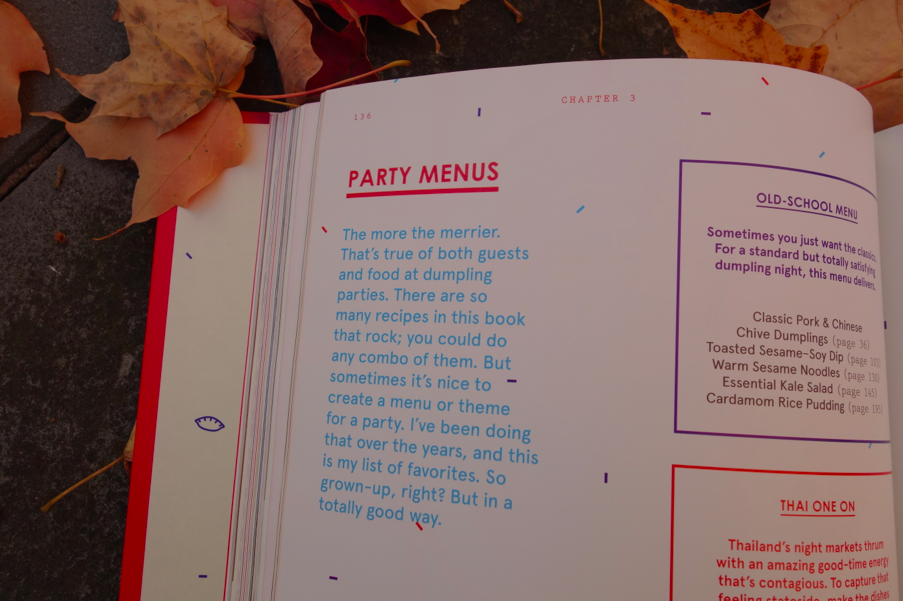 KKL: I am always going to say ice cream, but for a dumpling party I love making mini ice pops like the Vietnamese Coffee Pops in the book.  I also do love a good mochi ice cream!  For mocha ice cream there is no one better than Bubbie’s from Hawaii.

Do you love to cook any other types of food? 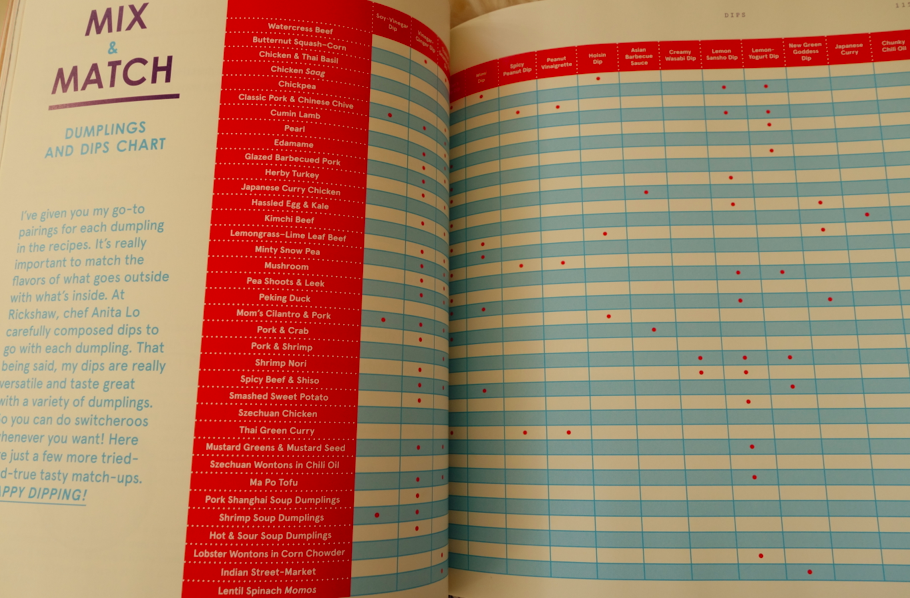 Mix and match, dumplings and their sauces.

KKL: I kill it at home on Tuesday Taco Night.  I really cook across the board when it comes to cultural influences.  I think the foods that I am drawn to cooking are ones that possess depth, various textures, and nice complimentary high notes.  Asian cooking does that but so does Mexican, and many many others.

Our mutual friend, Lynn, tells me that “One of Kenny’s many talents is his party organizing brilliance. He has thrown two of my most favorite potluck/cooking parties ever. 1. A pie party– everyone brought a sweet or savory pie. It was so fun and delicious to indulge in so many pies, quiches, etc. 2. A grilled cheese contest– everyone brought fixings to make two sandwiches. We had a round robin of making the sandwiches and judged them on cheesiness, meltiness, etc. People were so creative!” AMAZING!!!! Any other great dinner party tricks or themes?

KKL: OMG the pie party was the funnest.  No cooking at the house, no hot oven POTLUCK!  Just make sure when you host a pie party you get some folks to do savory.  Summertime pie parties are the best! The most fruit and a perfect time when you don’t want to be over a stove with guests.

Dumpling Party at the end of the day will always be my go to.  It is so fun and interactive and easy.  You can make the filling the night before and have your guests do the wrapping with you and a beer!  There are some Dumpling Party menu suggestions in the book as well!

As someone who doesn’t throw dinner parties because I am afraid of cooking, any tips or ideas? 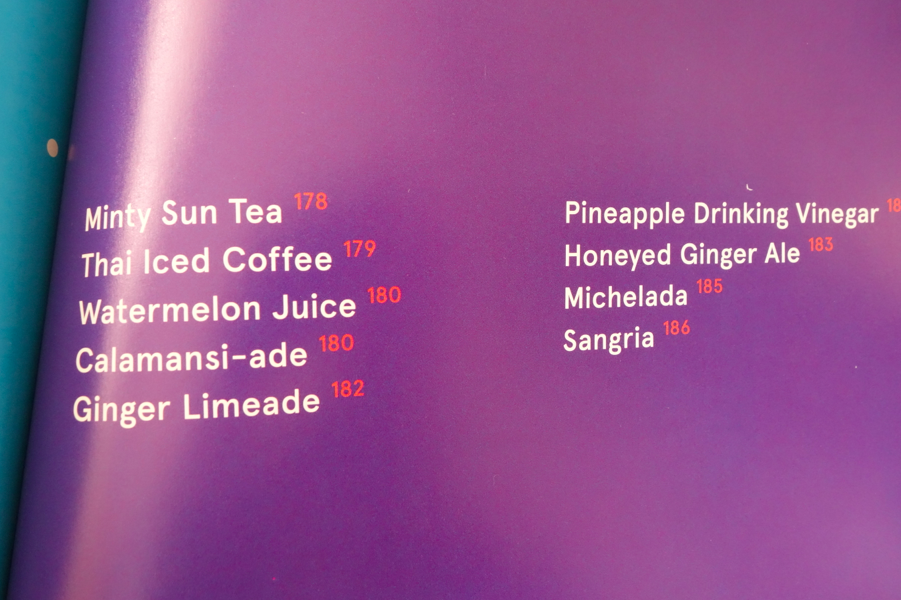 Lots of drinks for parties.

KKL: Think about menus where there are very few items that are a la minute, meaning don’t have all of the items you are making need your attention last minute,  For large parties, I love doing braises as they hold all day.  Also check out your list of to do’s and figure out what you can do the day before and the morning of.  For example, for a dumpling party you can make the filling the day before or morning of and make your guests do the wrapping!

What are your current favorite restaurants in NYC?

KKL: Charlie Bird for everything, ABC Kitchen for their veggie dishes, Minca for it’s ramen.

What are your current favorite bakeries / food shops in NYC?

I read somewhere that you are a “reformed marathoner” — what does this mean? And any marathons in the future for you? Do you apply your marathon mental game to your cooking? 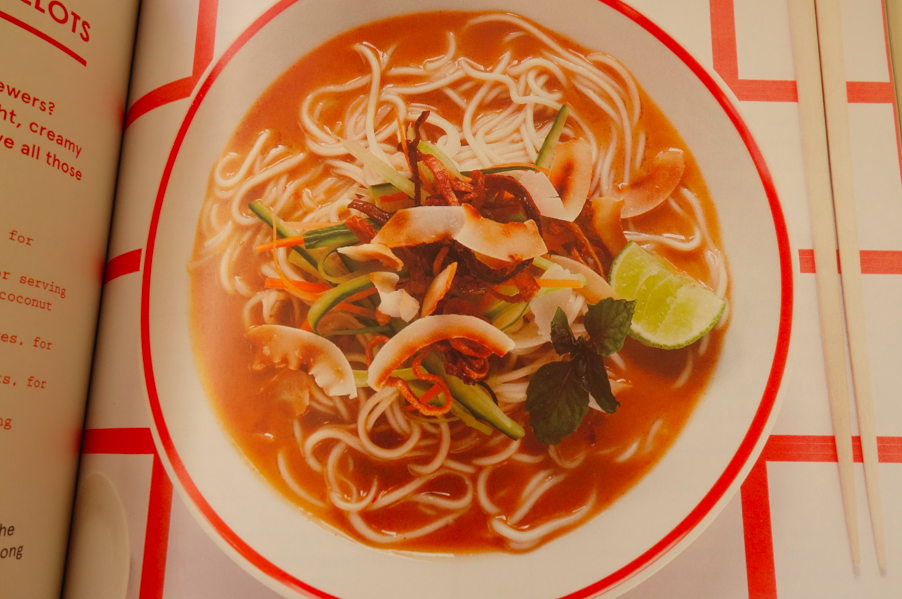 I am sure that the noodles helped Kenny’s marathon training….

KKL: You dug deep!  Looking back at that marathon period, I realized two things, for me it wasn’t about the journey and it was so hard on me.  We should all try to minimize those two things.

I read that you love mangoes, watermelon, and bacon. How do you like to eat those ingredients? Any good recipe with all three? and what type of bacon is your absolute favorite (I also love bacon)

This is a super summer, I-can’t-deal-with-cooking dinner.  If you have leftover bacon even easier!

* Half a large watermelon

* 2 Mangoes (one ripe cut any which way small, one almost ripe diced ½” square)

* Heat up your grill to 500.  Basically crank it as high as you can and keep cover closed to keep heat trapped in there!  Don’t peak, you know what it looks like in there!

* Using a chef’s knife on an oval shaped watermelon sitting on it’s side, cut four slices that are each three fingers wide.  Cut all the way through the watermelon for each slice.  Using a paring knife, carefully cut the rind off the watermelon to where it is pink.

* Cut each slice in half so you will end up with half circle shaped steaks.  Rub each slice in turn with olive oil, then the salt and chile powder to taste.

* When your grill is up to temp, put the steaks on the grill and close the cover immediately.  Let it grill for about 4 minutes, don’t look, it will be OK.  You need to keep the heat in it.  Flip and grill on the other side for 4 minutes.

* In a bowl mix the ripe mango with lime juice and push it around with a fork a bit and between the tines.  Add the other dice mango, cilantro, bell pepper, red onion and jalapeno and mix well.  This can be made ahead and holds for two days.

* When serving toss in bacon and mix. 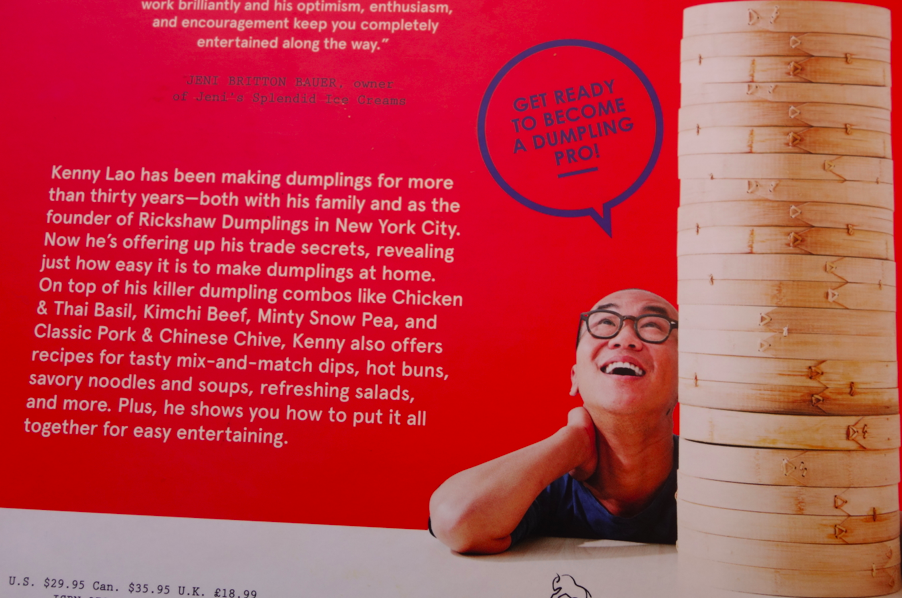 Thank you, Kenny! You are hilarious and fun, talented and articulate. Can we please be friends?

Check out a Dumpling demo woohoo! And buy the book — I promise you will love it. I am so excited for my dumpling cooking, treating friends to these recipes, and making it a part of my family traditions. Thank you so much, Kenny!