Readers know that for his 40th Birthday party, Ken put on a concert at Red Rooster with his guitar teacher on bass and a bunch of other musicians that he cobbled together through friends, Facebook, and random interactions.  Heather Cole was the fiddler, and she was great- Ken checked her out when she was busking in Grand Central. I love listening to street musicians, but I’ve always wondered what the experience is like on the other side.  The perfect opportunity for a Josie Girl interview! 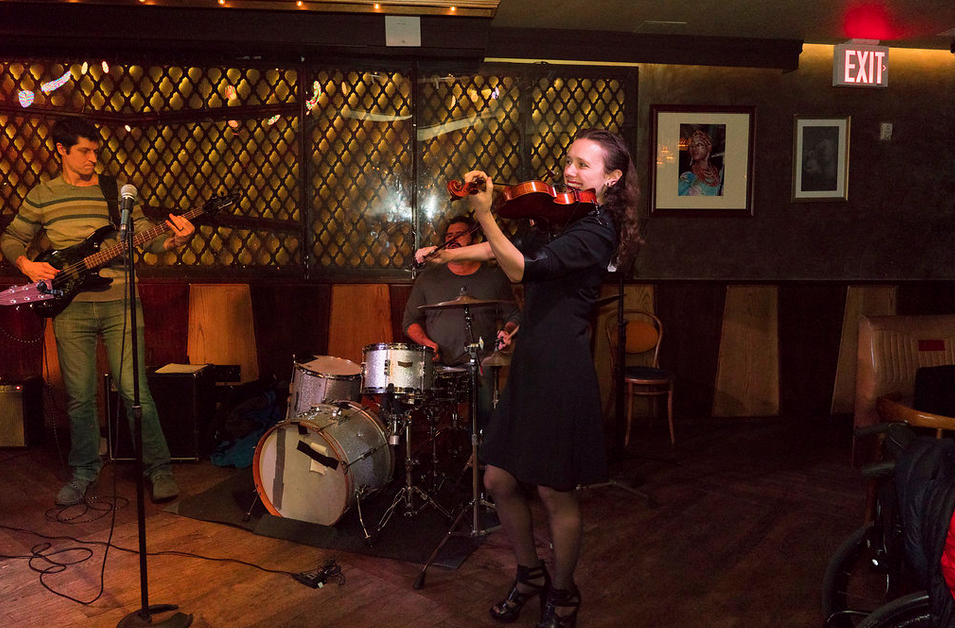 Playing music is only a part of what you do professionally and for fun.  How do you spend your time?

Last year I graduated Hunter College as a physical therapist, and now I’m working in a rehab unit helping patients with traumatic injuries learn how to walk again. For fun, aside from music, I spend my time curled on the couch with a book, hiking, biking, or hanging out with my momma or friends. 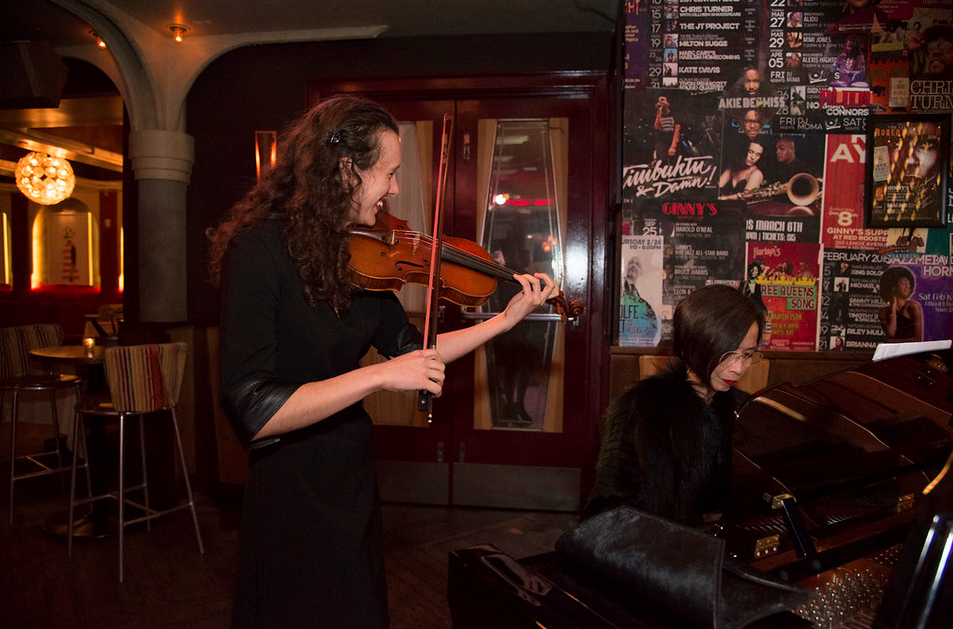 What is it like playing in Grand Central?  Are your interactions with commuters generally positive or negative?

It’s wonderful. I’d recommend it to anyone, only please stay away from my spot. My interactions are almost all really really positive. Some days it feel s like a love fest, though of course I’m basically ignoring those who pass without interacting. My straphangers have been extremely complimentary and stunningly generous. It’s a wonderful feeling to be doing something I love and have people thank me for it, telling me I brightened their day. I’ve made friends, gotten gigs, met a few guys I wound up dating, got a skin infection that sent me to the ER (tapping your foot as water rises from the sewer until it’s splashing on your calf is unwise, apparently), have been confidante to a wide array of NYers looking for a sympathetic ear, became someone’s ringtone, been filmed for a few documentaries, got a $20 from Batman (this man was in the absolutely perfect costume), was given and got to scalp 6 tix to the US Open, been offered a variety of jobs from real estate to prostitution, seen several straphangers go from single to married to having kids, been hassled by cops, been given a thumbs up from cops, got a music request from a soldier, had a cop instruct me to switch from a happy Irish jig to something more mournful as she wrote tickets for some turnstyle jumpers, received a couple love letters and innumerable come-on lines, been given way too much well meaning but ignorant advice, had a blast and felt practically like a mascot during comic con as I played Star Wars, Game of Thrones, and stuff of that ilk, as a parade of people in costumes lit up when they heard me, played in a mermaid costume for Halloween one year, practiced and learned a lot of music, got more comfortable improvising, and generally have had a ball. When I busk I’m playing violin and having a series of really happy, sweet interactions with strangers and friends. Total delight. 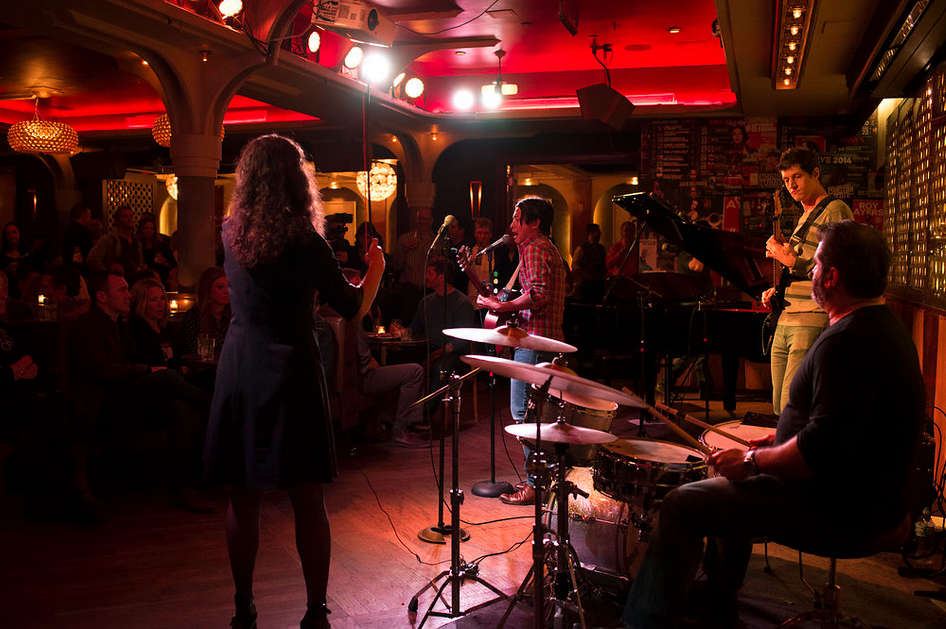 What’s the craziest thing that ever happened to you busking?

It’s hard to pick. but the Mets this year were pretty crazy. This autumn I noticed the orange&blue-ing of my straphangers and asked a sporty friend what was going on. I tried playing Take Me Out to the Ballgame, but that got lukewarm responses. My friend suggested I learn Meet the Mets, and suddenly I had people who’d been passing for years without acknowledging me throwing me money. One grisly old man looked me in the eye as if to see if I honestly loved the Mets and announced, “you’re a true New Yorker.” When it became apparent we were going to the World Series I bought a Mets baseball cap, and suddenly a third of my income came with the words, “this is for the hat.” (And from one Kansas City fan before game  5, “look! It’s like the fiddler from the Titanic!”)  It was so much fun. People would give me big grins when they saw me in the orange and blue, and a lot of people sang along as I played Meet the Mets. I played all day for the first home game, starting at 7 am, with a friend visiting in the afternoon to play a few tunes in my spot while I ran to the bathroom. In the early evening when the fans were heading to the stadium a few started telling me I was the cover picture on ESPN.com! I thought the first one was just messing with me, but indeed, someone from there posted a pic of me busking. I also got an article in Vice, and for days after people kept telling me that a certain sweet city councilman had posted a video of me. In an ideal world this would’ve ended with me playing on a float in their victory parade, but Kansas City unfortunately won the World Series. If we do well next year I will take a week off work. 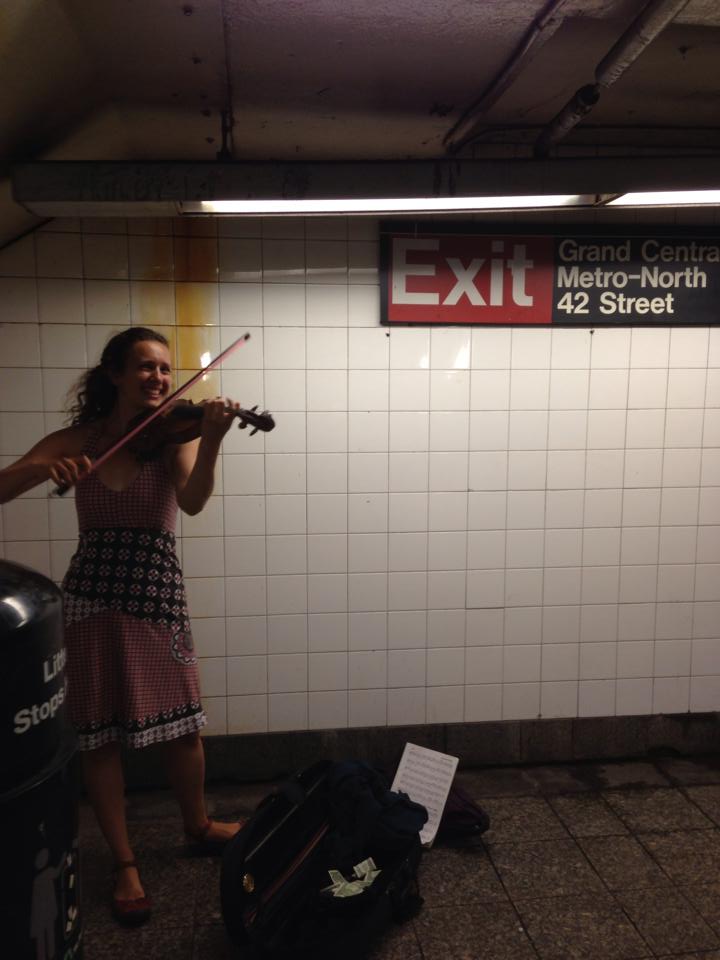 Heather in action at her spot. Grand Central on the way to the 7 train!

Tell us more about your band.. where do you practice/play, etc?

My band is called Sweet Soubrette.  It’s run by Ellia Bisker, one of my best friends since 3rd grade. We play random spots — we’re doing one Billy Joel cover at the Puppet Playlist March 17 and 18, and on March 25 we are doing instrumental versions of our songs for a circus at The Muse. We don’t have any full band regular concerts coming up, but I hope we will soon! 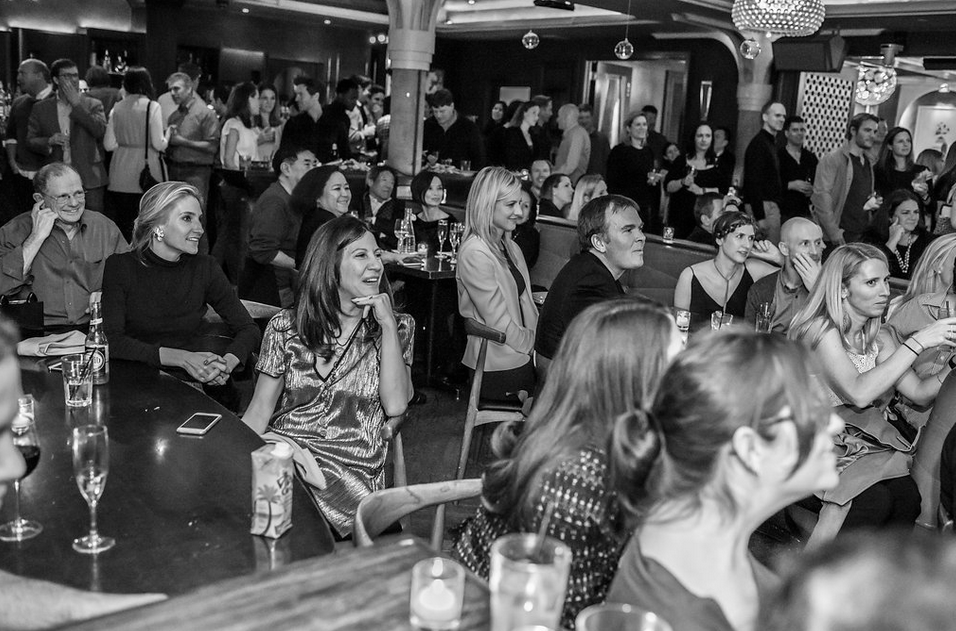 The crowd at Ken’s birthday concert.

What is your musical dream?  Would you want to play fiddle full time?

I want to be in a creative fun project with good friends, travel around, and have receptive, appreciative audiences. And other musicians I admire will invite me to play around with them.  And maybe I’ll get to parachute onto a stage some time. Last year I sent in an audition tape for Cirque du Soleil. If I don’t hear back by summer I’ll probably redo that. Or maybe Ken can get O.A.R. to sign me? 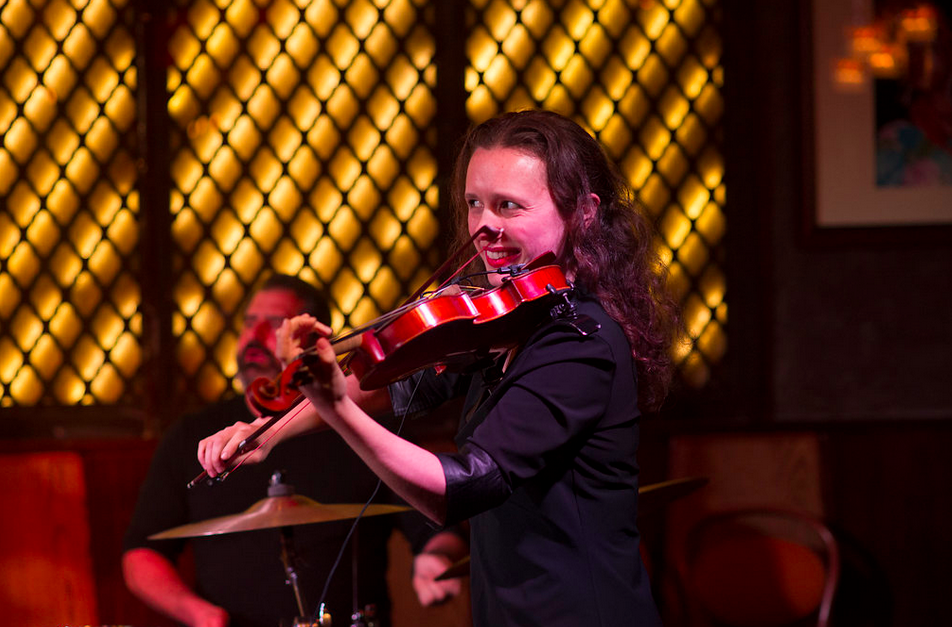 What is the difference between a fiddle and a violin?

You practiced with Ken just a couple of times before the party at Red Rooster. You guys and the rest of the band looked like you had played a lot together (and a bunch of people thought that outside of Ken, you guys were all in a band together).  Is that how these things tend to work?

Thanks! That’s so sweet to hear! But yes, that is kind of normal. You get a bunch of friendly and skilled musicians together and it shouldn’t take too long until they’re putting on a decent show. But Ken’s organization, how he ran the rehearsals, gave us feedback, let it feel like a group project, allowing us our own voices while giving us a form to work with, really helped speed that process. 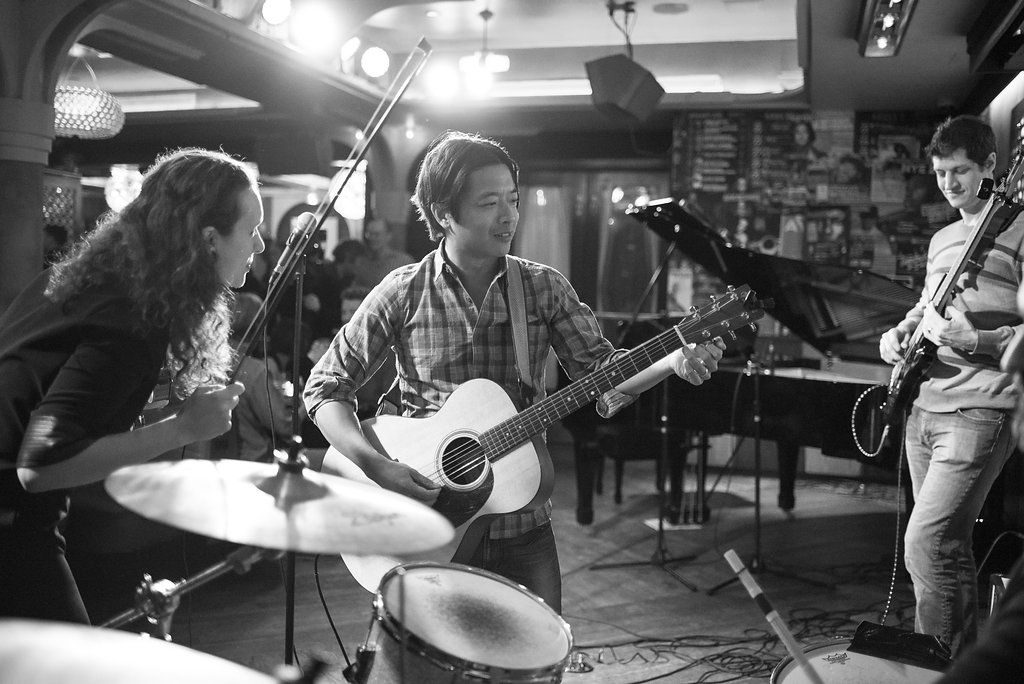 How did Ken’s birthday compare to other events you have played?

It was so much fun! It was actually pretty unique. For me the project was more about us supporting him than thinking about the audience or my roll in the performance, and because he was pretty clear about his vision, flexibility, and happiness with how we sounded, he made the show low stress and a pleasure. In busking I get to take center stage. In playing with others I like to be part of the texture, playing a supportive roll where I can focus on what I’m doing while someone else shines, so I really enjoyed backing Ken. Also, he had two of my favorite songs in the set, so it was a kick to perform those with a full band; I got chills during Tiny Dancer as the room sang along (Wagon Wheel is another favorite). It was awesome having a big excited audience right in front of us. You always get energy off the crowd, and Ken’s friends were perfect – singing along, cheering, smiling at us.  And I think the whole band was inspired by Ken and his decision to do this show. It takes a lot of courage to perform, I think more so in front of friends and family than strangers, and especially when you haven’t done a lot of it before. He makes me want to go try something new. 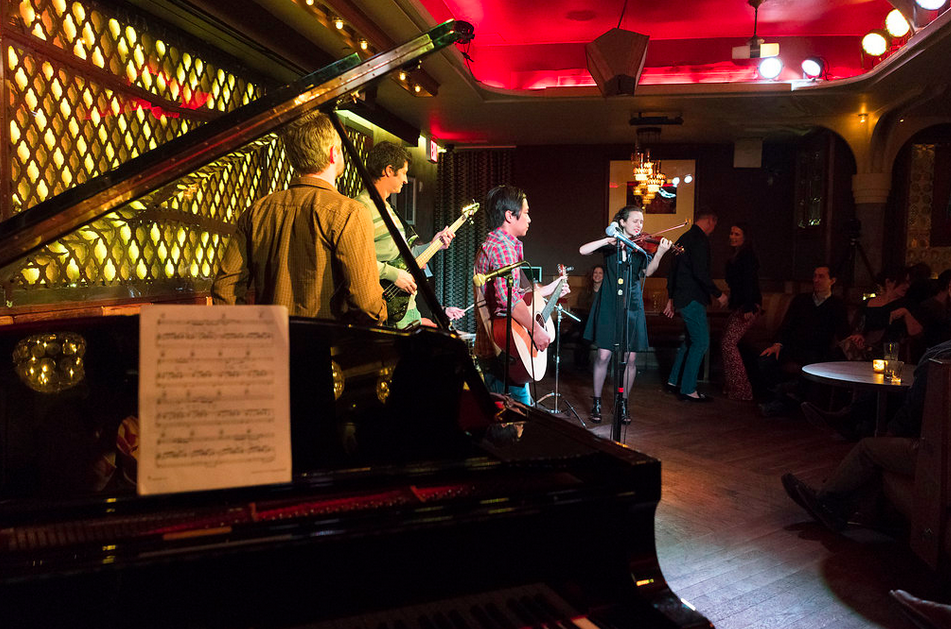 Any words of wisdom for musicians looking to make it in the big city?

For musicians — I’m not really in a position to give advice, as I now have a day job. But I’ll try: when someone asks for your card for a gig, get their contact info too. So often they won’t get in touch, and if you can reach out to them you may be able to salvage the gig. Be nice to all other musicians and be easy to work with, as you never know when someone may have a gig to offer. I’ve gotten stuff years after an encounter and from the most surprising people. Be on time but bring a book. Study stage presence in performers you like and consider making choices about your own stage presence based on your findings of what you like and dislike. Don’t take free or underpaid gigs (you undercut all of us when you do that), get an advance if you have a shadow of a doubt about getting paid or getting cancelled on, put a friend in the audience who can give feedback about the audio balance because too often sound guys are unreliable.

For straphangers: Give your musicians a dollar! Or even just change. Really, every person who drops in something, anything, gives me a lift. Smile at your musicians! Tell them you appreciate them. Write them sweet notes. If you want to take pics, give money, then ask if you may take a pic. For bonus points offer to send them the pic of it’s good, and feel free to give more money afterwards, especially if you took a lot of pics. Don’t just take a pic and leave. Flowers, (unopened) food, anything is appreciated. Let us know you see us, you like us, our music touches you. 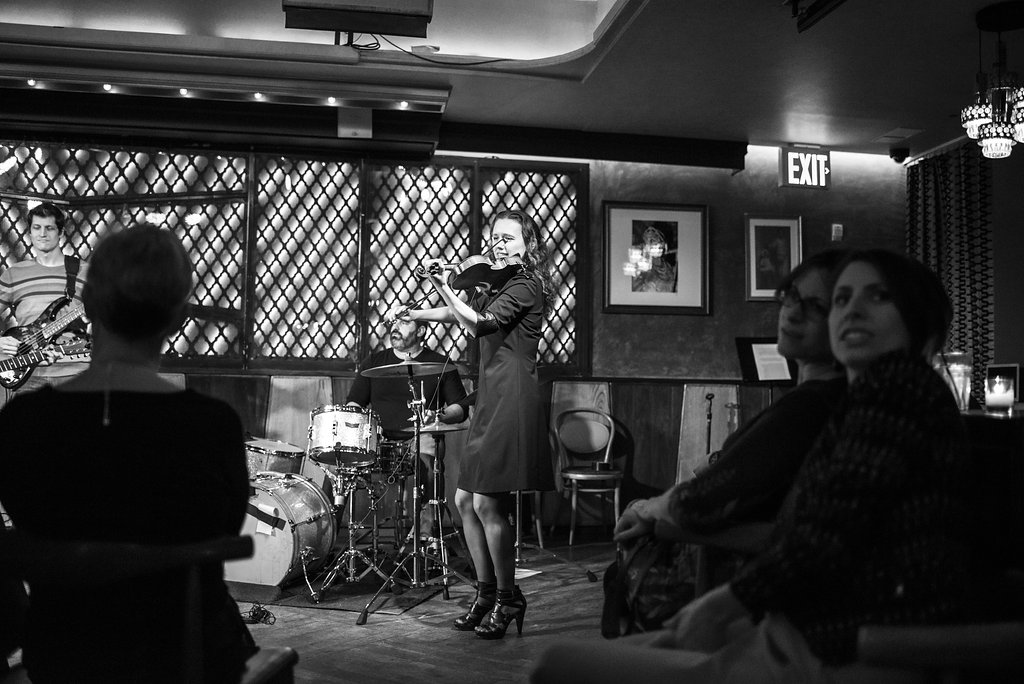 Thank you SO much, Heather. Your talent, dedication, emotion, and commitment to music inspires me to no end. Thank you for your interview, and thank you for touching the lives of fellow New Yorkers.