When we were mapping out our summer travels, I knew that at one point, I wanted to take the kids on an overnight sleeper train adventure. Luckily, we had planned to go on our annual trip to Sonoma, so I knew that the magical train dream would be able to happen. It was perfect timing as my best friend from college, Bridget, had been visiting us in Eugene, and we were both aiming to get to California at the same time. So the five of us — me, Bridget, my two kids and her daughter — all went on the adventure together. And it was exactly that: an adventure. Not a mode of transportation to get us from Point A to Point B, or a luxurious beautiful hotel, but a memorable and fun experience. It was so much fun that I hope to make it an annual tradition — there was something about it that was nostalgic, peaceful, romantic, and comforting. 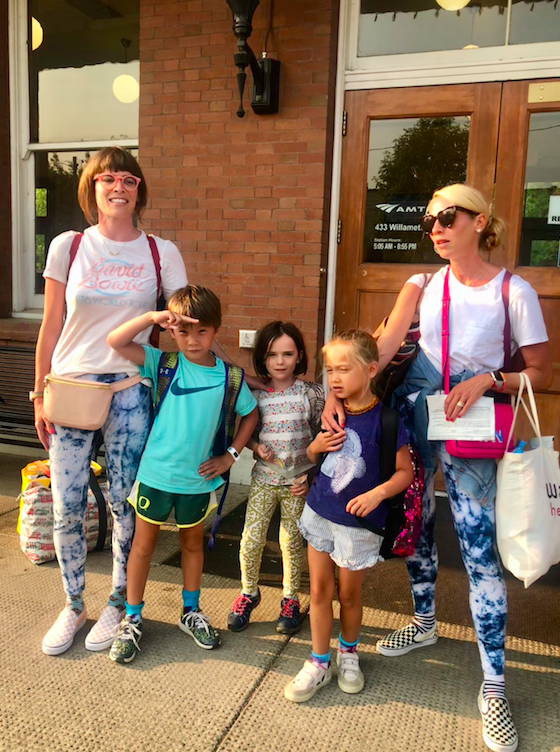 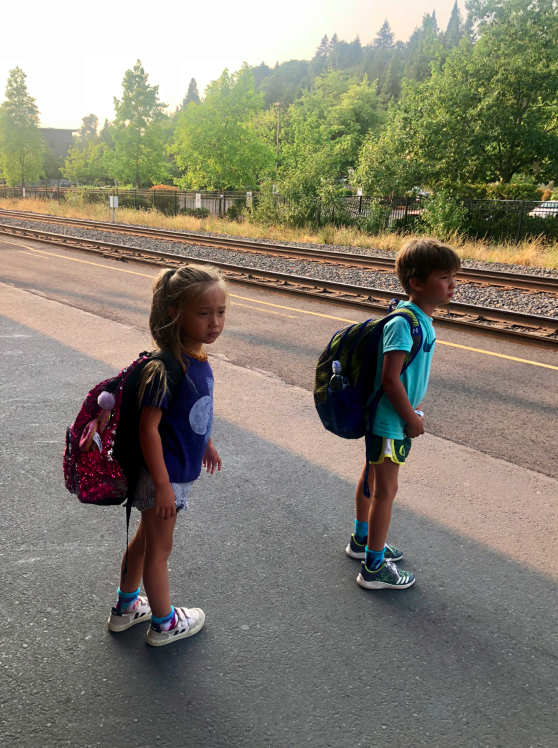 We were supposed to leave Eugene at 5:30 pm — arriving in Emeryville (Bay Area) at 8:10 am. But of course, there was some kind of delay and we left at 7 pm instead. But it was an adventure and it didn’t matter at all…(and the aperol spritz helped). 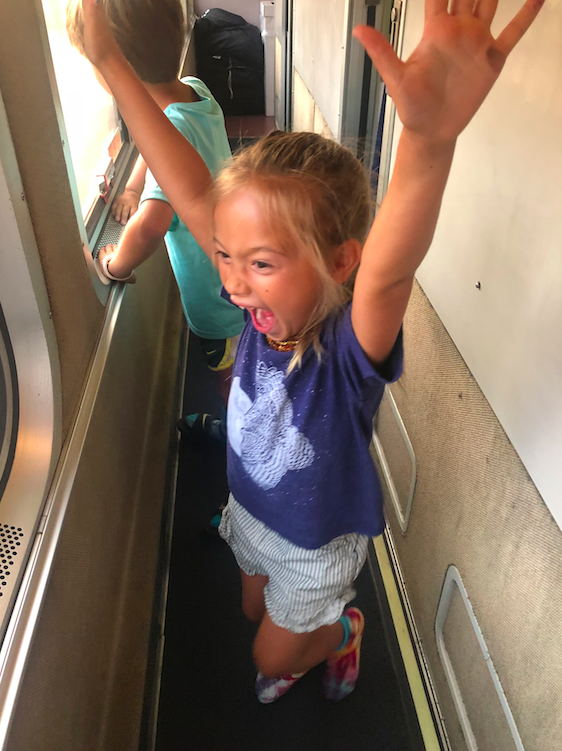 Toosh was SO excited for the train ride — actually, we all were. We had no idea what to expect and just loved being all together and experiencing it! 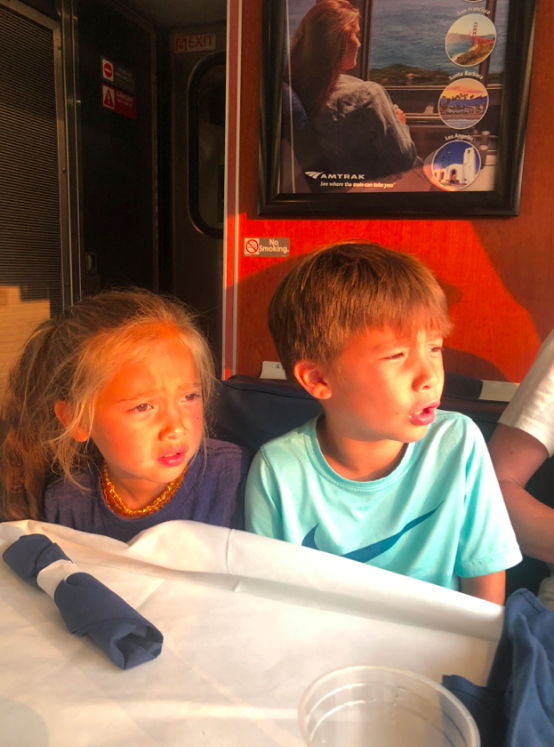 Dinner at the restaurant. 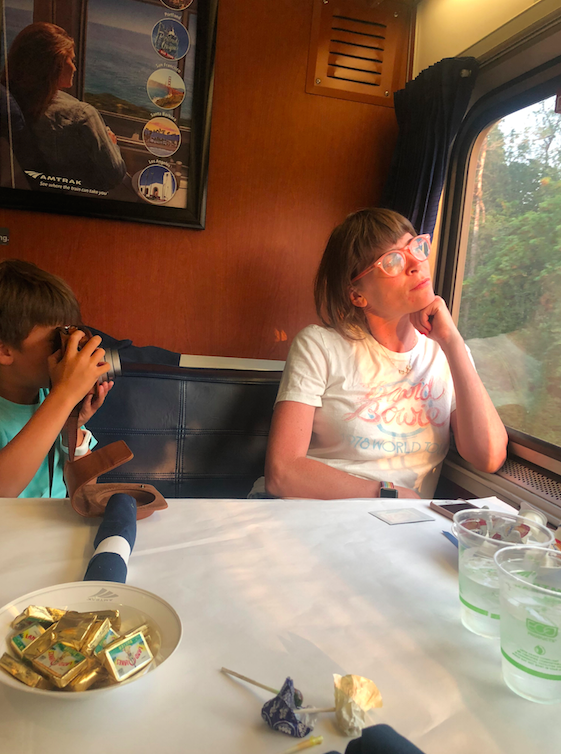 Every moment felt like a photo opp – the views in Oregon were out of this world beautiful and it just felt so classic and like a movie. 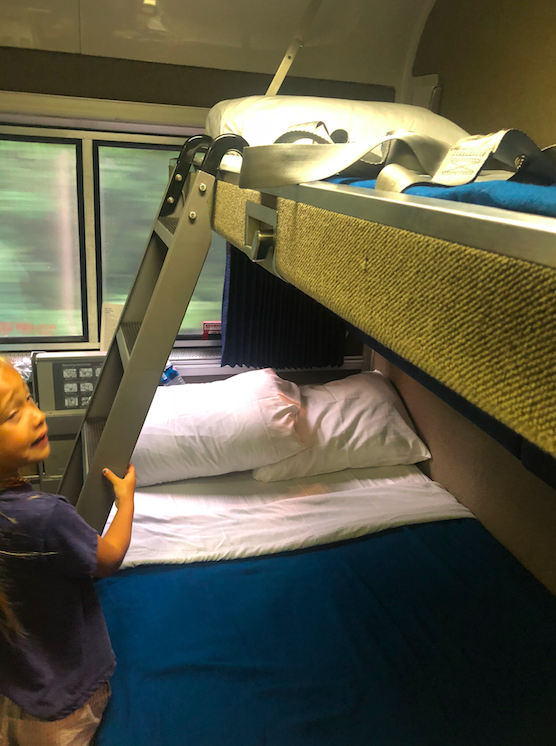 So, first let me explain that it is TIGHT. But I knew that going in. I shared a cabin with the two kids and it was kind of being like sardines, but it also felt special and cozy. Cruzzie slept on the top bunk and me and Toosh slept on the bottom. When we were not sleeping, it converted to a couch. We had our own private bathroom in the tiny cabin. Not a 5 star hotel, but clean and nice enough! 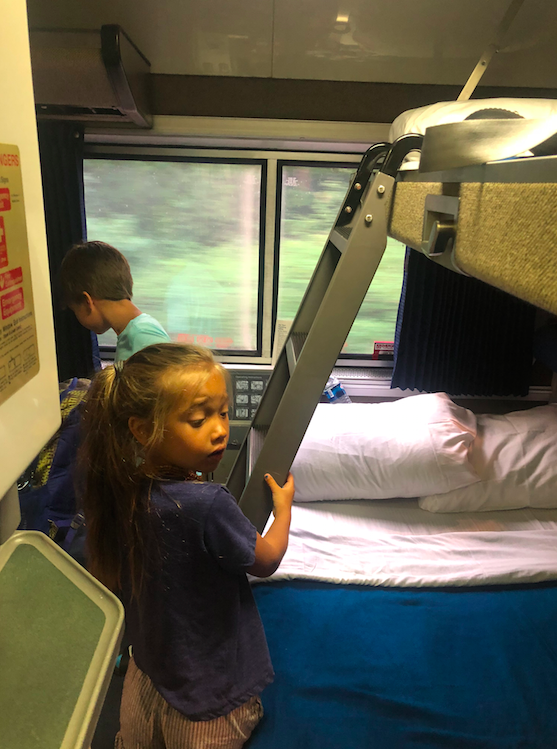 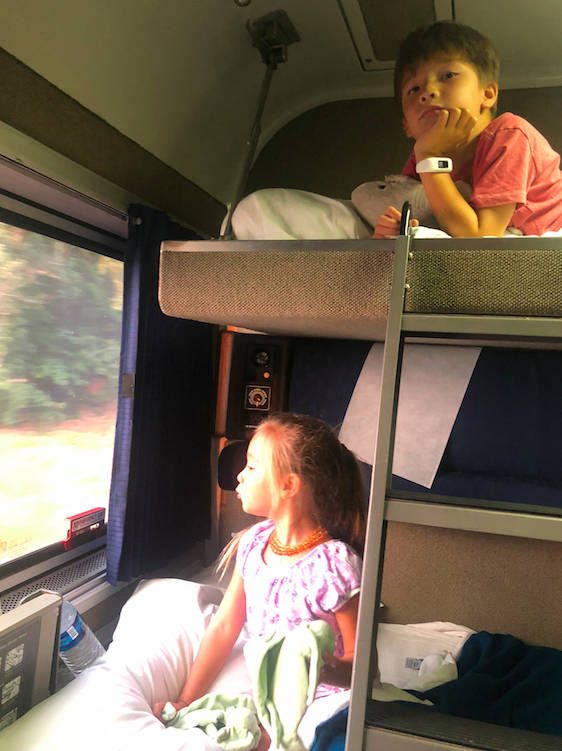 Bed time — as cliche as it sounds — we literally spent most of the time (when awake) looking out the window — the views were incredible and there was so much to look at. 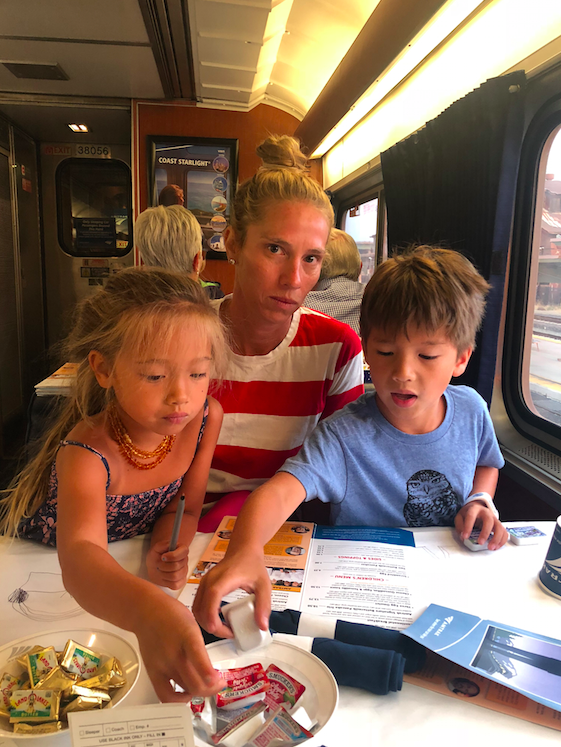 Breakfast in the dining car. We ended up sleeping fairly well — better than expected. We fell asleep around 10 and woke up around 6. There were some bumps and stops along the way, but overall, a pretty good night sleep considering we were on a train. 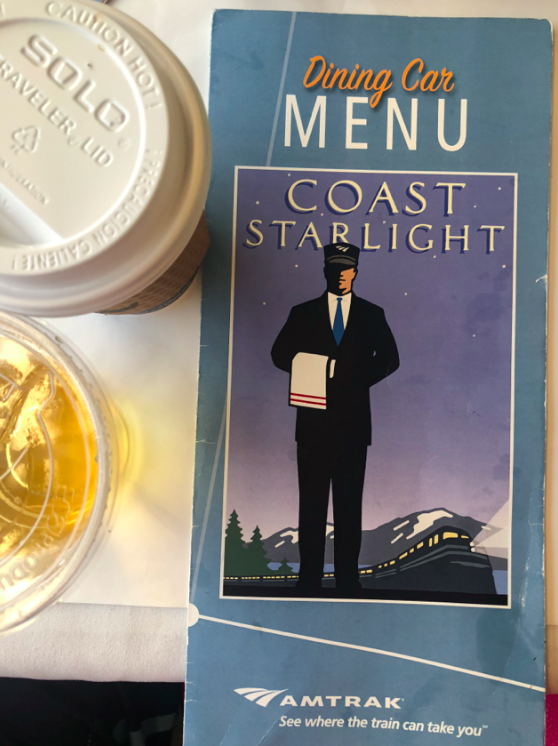 Retro. Being in the train felt like going back in time — nothing is modern or high tech. Far from it — it is quite backwards and slow. I went on a train ride in the 80s with my mother and brother, and it was EXACTLY the same. 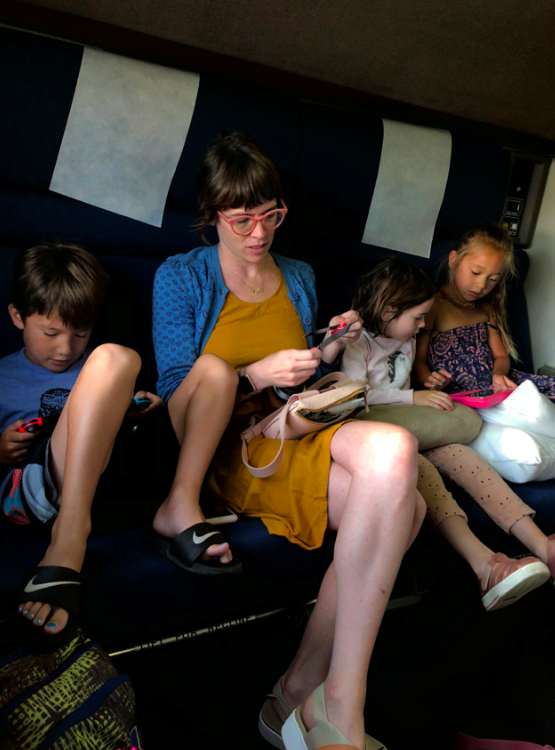 After breakfast, we hung out in our little cabin (bed converted back to couch) and just relaxed. 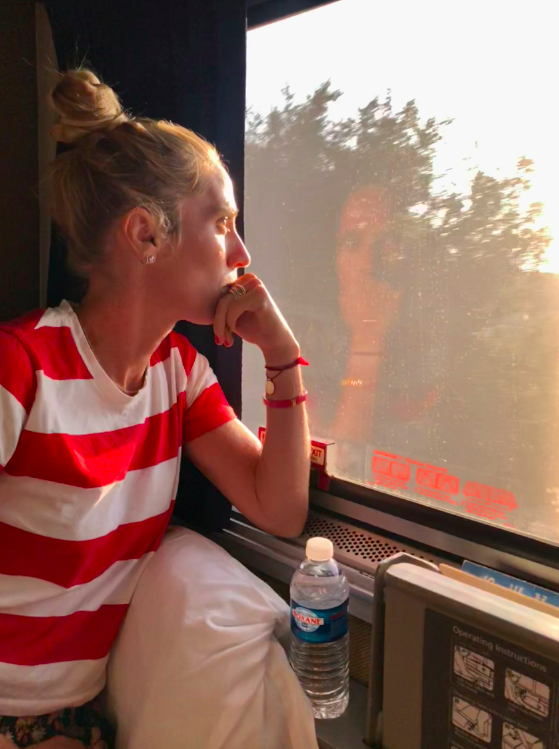 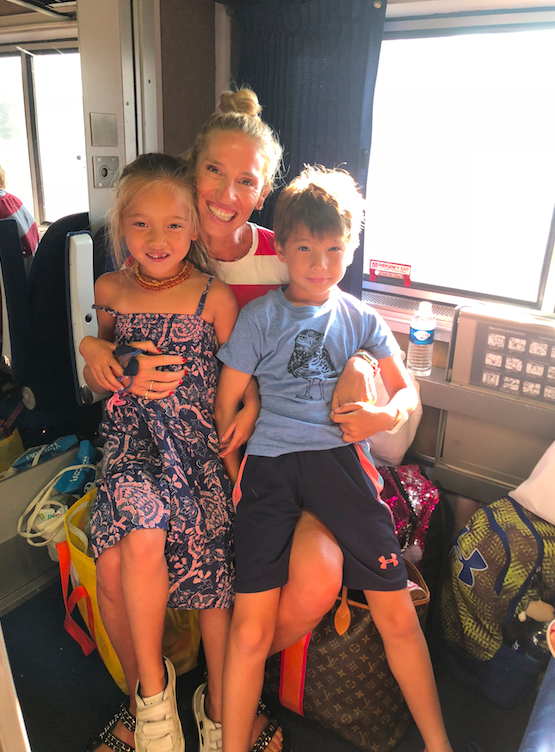 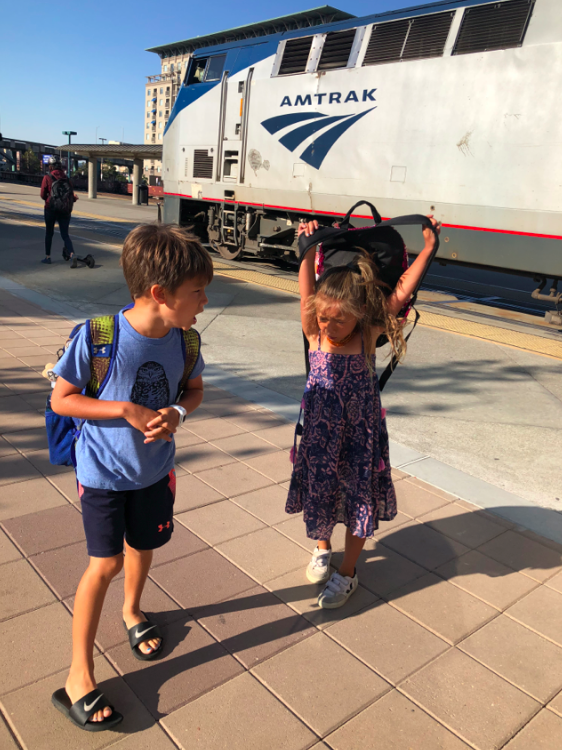 Bay Area arrival at 830 am! We did it! (And were soon after reunited with Ken who flew in the night before and picked us up)

Overall, our train trip was a 15 hour trip (versus an hour plane ride) and much MUCH more expensive than flying. But it was not about time or money, and more about an experience and a memory. And it was exactly that. I can’t wait to go next summer again — super fun and enjoyable. 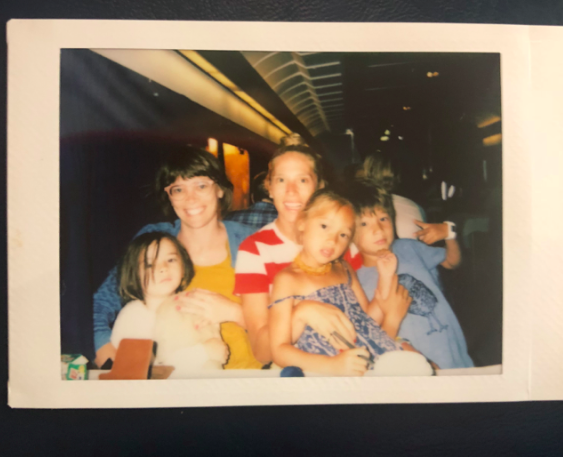