Last Thursday, May 6th, 2021, three friends and I set out to run the Rim to Rim to Rim – a trail run in the Grand Canyon from one side of the canyon (South Rim) to the other (North Rim) and back again. It was over 42 miles and a huge obstacle to undertake. After months of training and planning, we successfully completed the journey. It was a one of a kind experience and I am still in disbelief that we actually did it! Unlike other marathons, this was a self assisted ultramarathon, meaning it was only us on the trail (although we ran in to two groups of 2 guys doing the same thing that we were doing). It was also more risky than a marathon, not just because of the heat and the longer distance, but because once you go in to the canyon, you cannot be rescued. Our half way point – the North Kaibab trailhead is closed in Winter months – which means that once we got there, the only way back was to do the full 21 miles all over again. 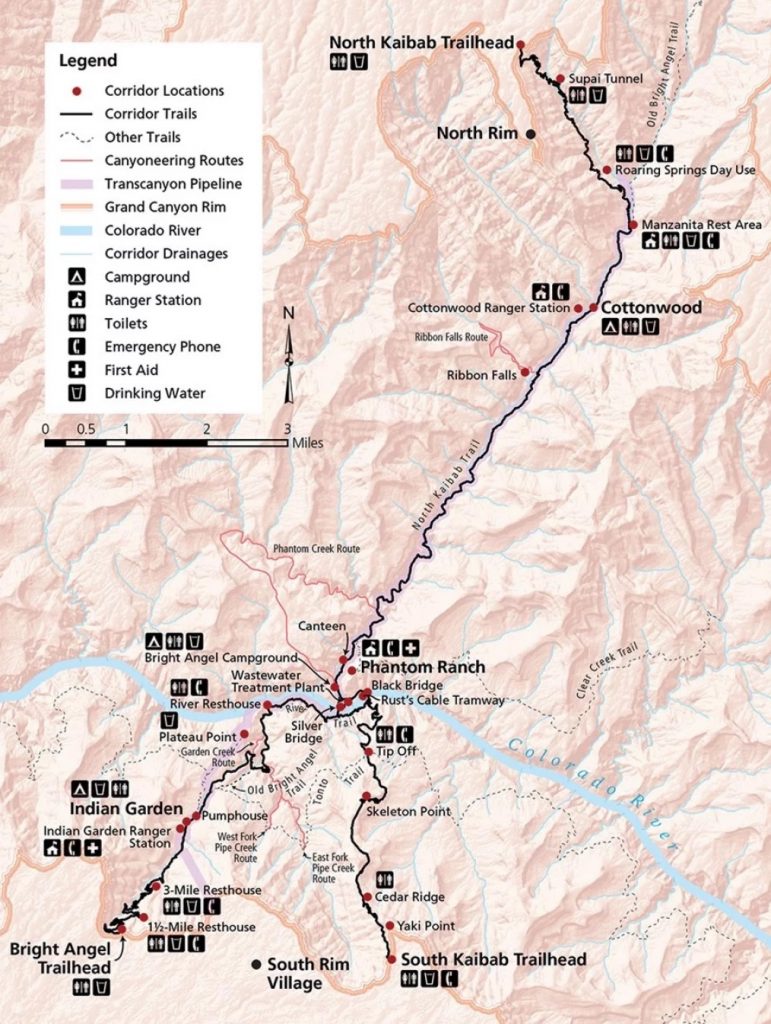 A map of the Grand Canyon. The route that we took was from South Kaibab Trailhead to the North Kaibab and back the same route. Other people opt to go down or up the Bright Angel Trail as it is more gradual, shady, and has more water sources — but it is also 4 miles longer.

A better view of the elevation and how difficult it was. 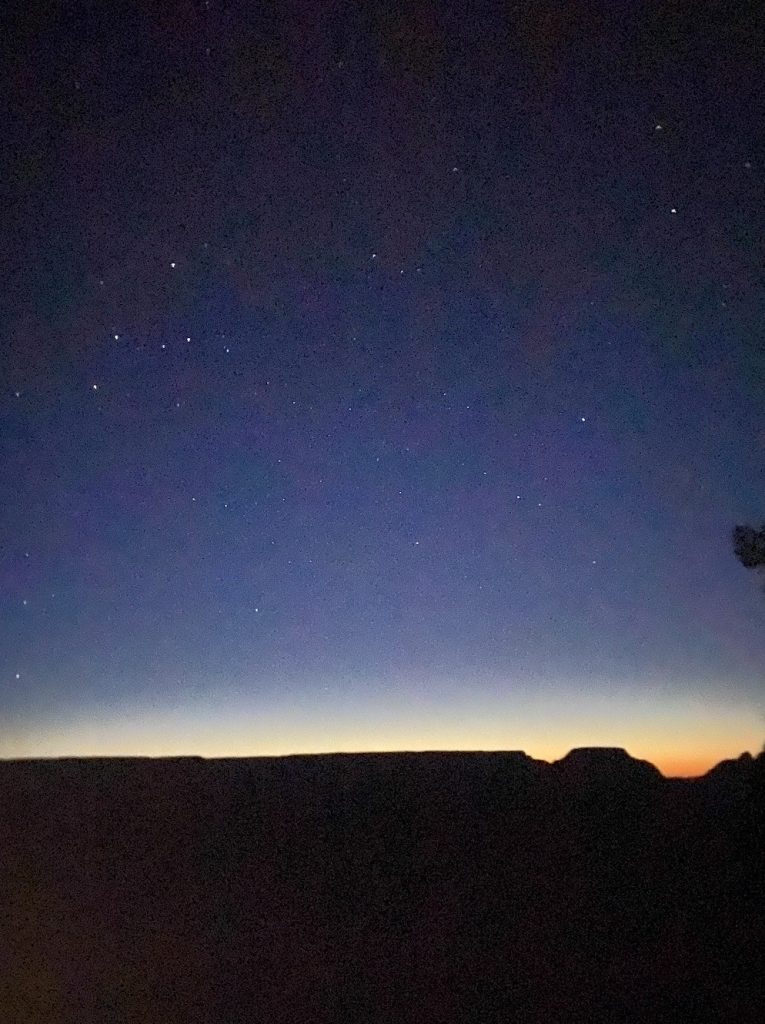 The day before, we woke up to run 3 miles at 3 am to have a trial run in the dark with our gear and headlamps. This photo was taken with my iphone and I am so in awe of the fact you can see stars in the photo! 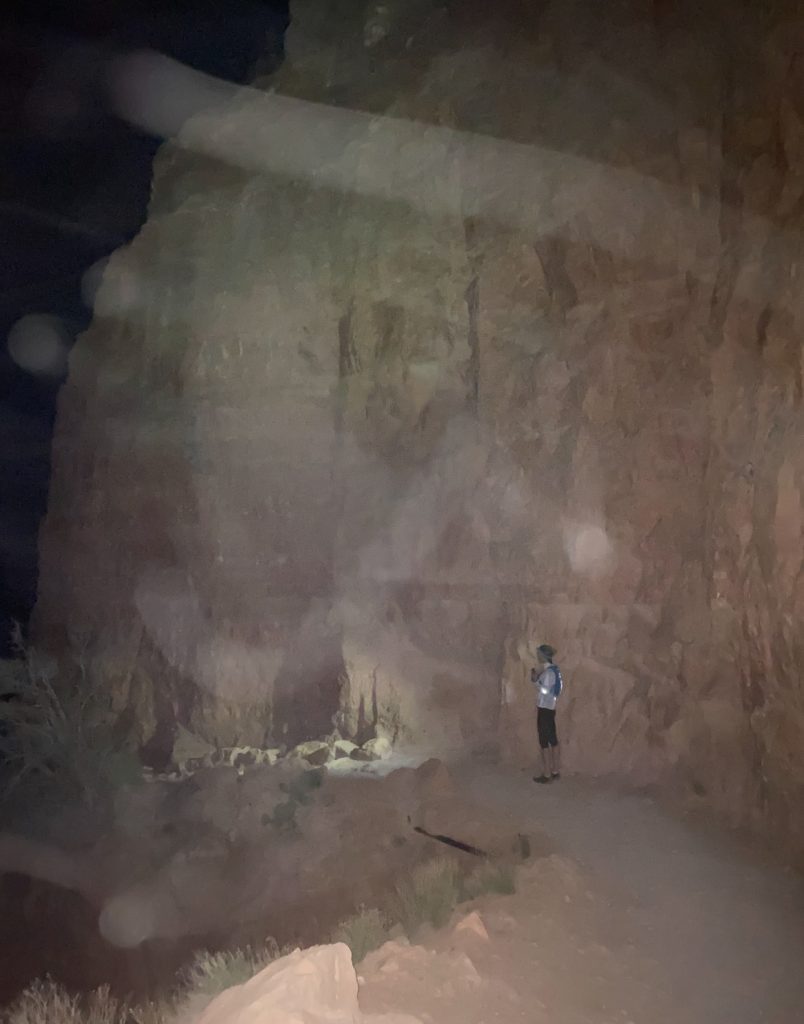 Not a great photo — but it shows how dark it was, and how small we were in comparison to the rock structure.

Due to the severe heat, we decided that it would be better to get a chunk of the run completed in the dark. This meant that we needed to start running at 3 am. I woke up at 1:30 am (no joke!) to eat a hearty breakfast, drink coffee, and get ready in a relaxed and calm way. The trailhead was a 7 minute drive from the hotel we were staying at, and we had to park 0.6 miles away from the trailhead (although we had Ken break the law and drive through all the signs to drop us off right at the trailhead). We began the trek at 2:58 am! 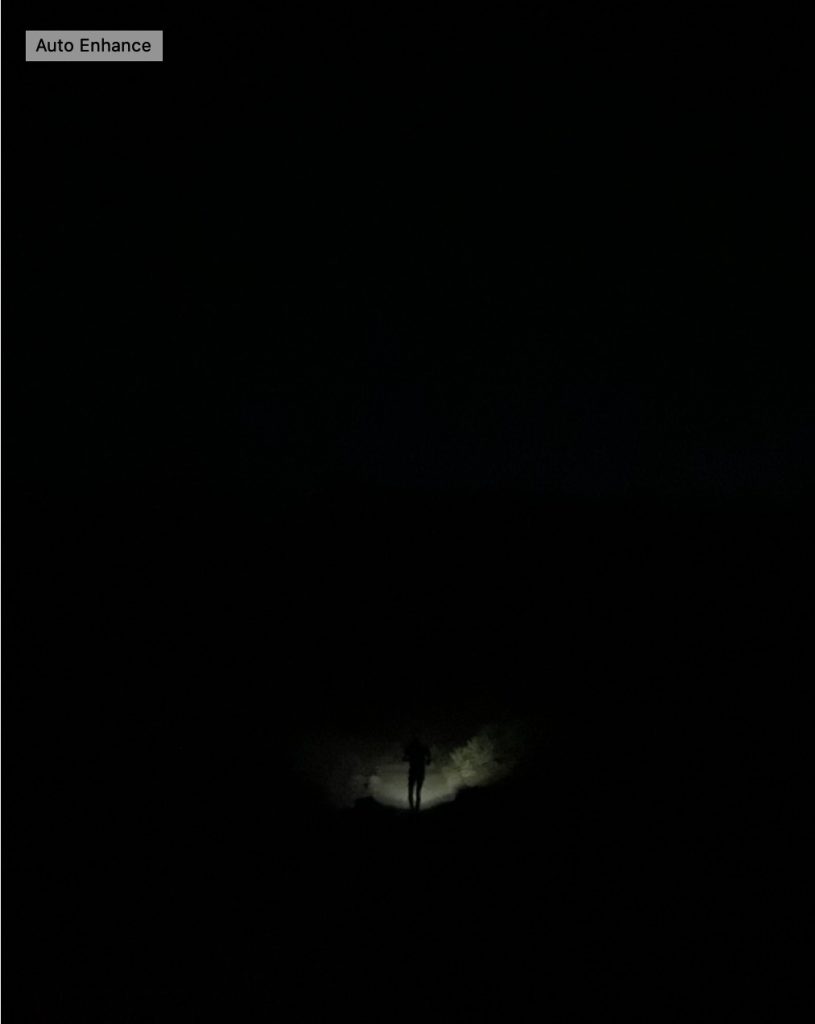 How we ran down 5,000 feet in the pitch black still is unclear. This is all we saw running down. 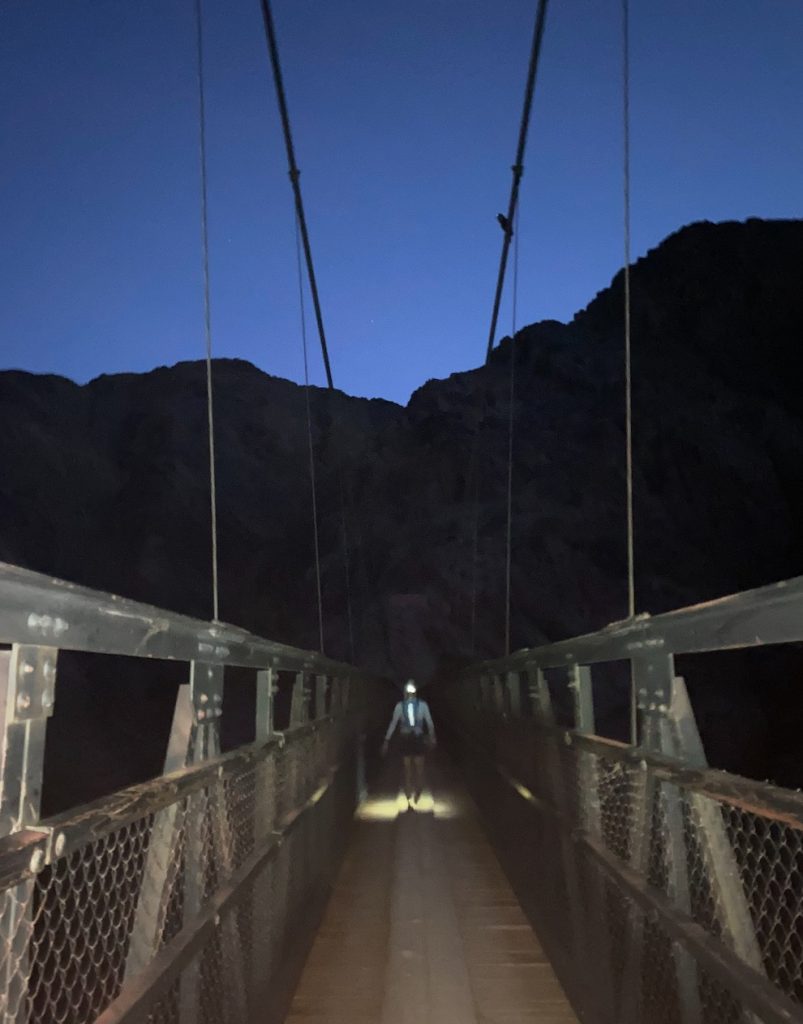 Crossing the Colorado River before 5 am. 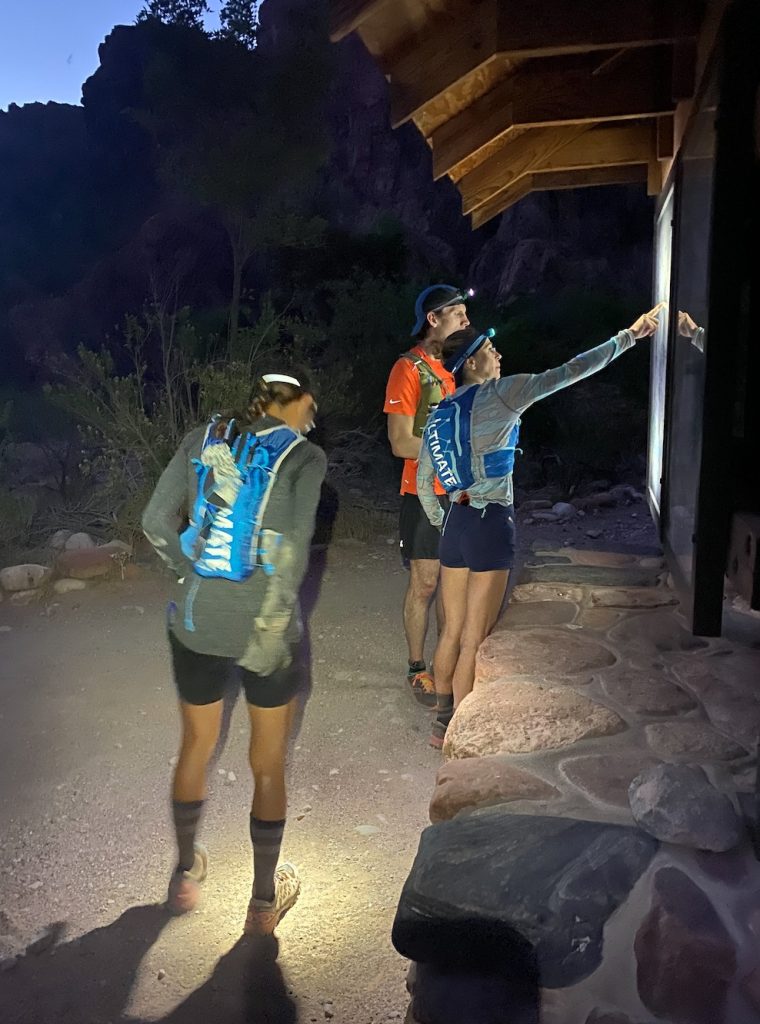 Mapping out the water stations was part of our crucial planning before and during the run.

Obviously there was a lot of preparation that went in to our gear, fuel, and water. We carried over 2.5 liters of water and this was absolutely CRUCIAL.  There were only water sources every 7 miles and it was important to hydrate throughout the run. We made it a point to stop every hour to eat around 200 calories. Some of the times, it was hard to eat as we were not hungry, but we knew that fueling in the beginning meant all the difference. 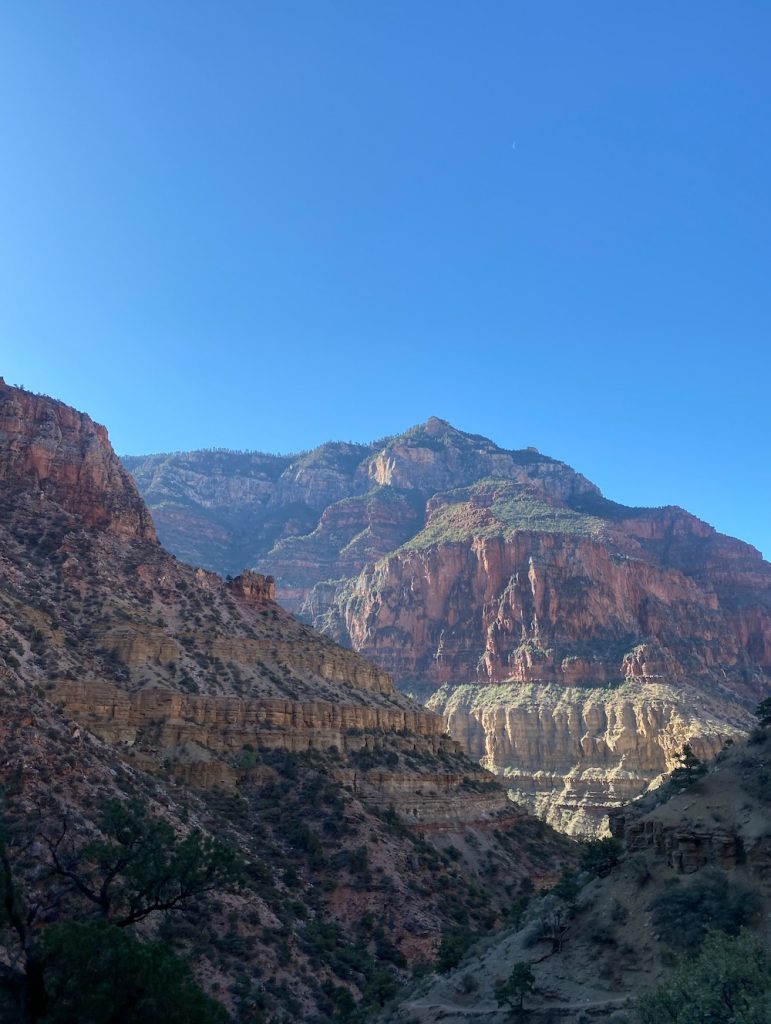 So many incredible views. 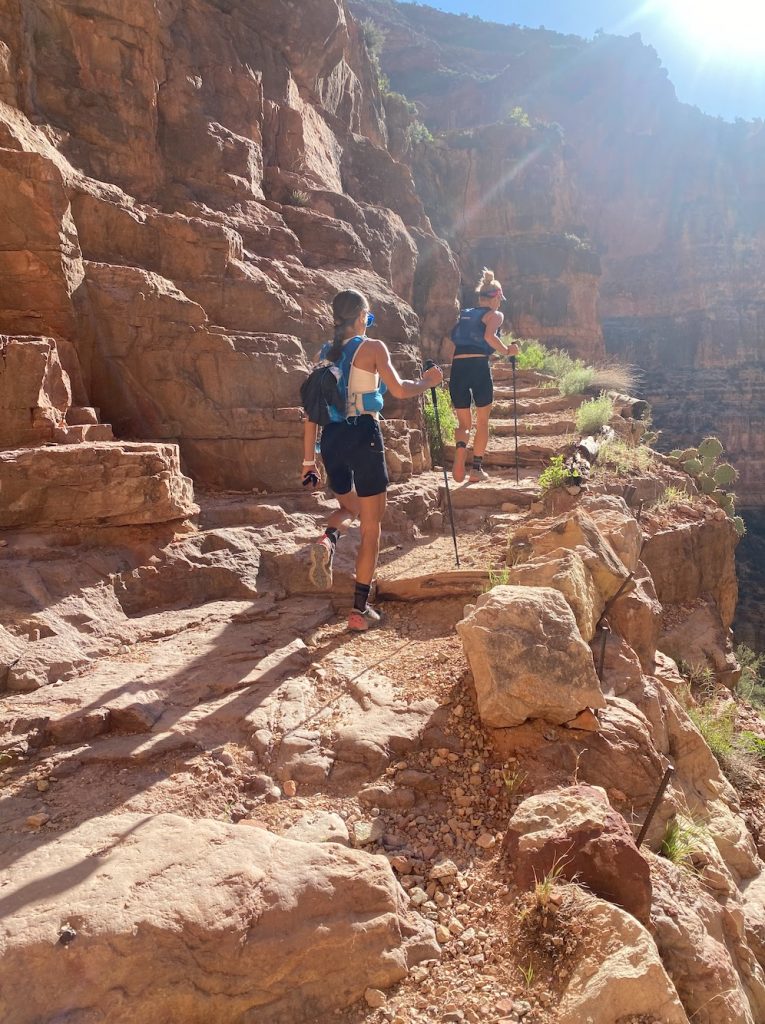 Lots and lots of uphill. Thank god for the poles — the biggest saver of all. 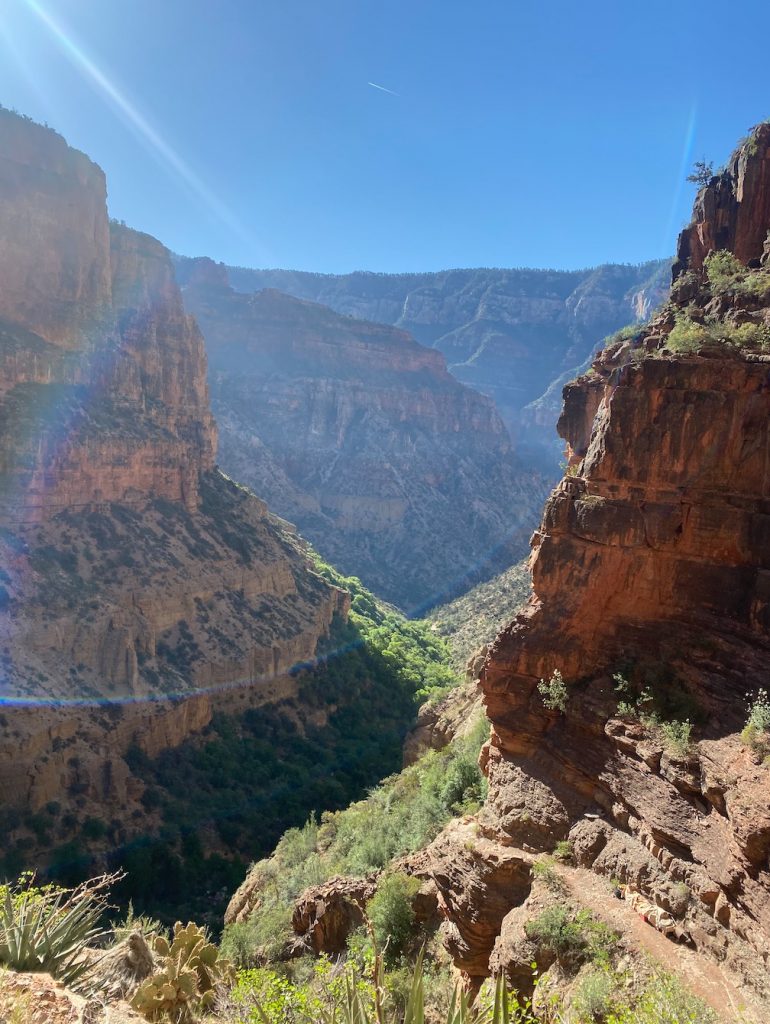 It was daunting to look up and see these huge mountains and know that we were going to be at the top at some point…..

Once we got to the North Kaibab Trailhead (where I feasted on almonds and a beef stick and filled up with the ONLY cold water of the run), I felt better mentally. I knew that from there, I could do it, because I HAD TO DO IT, as there was no way back except doing the reverse. 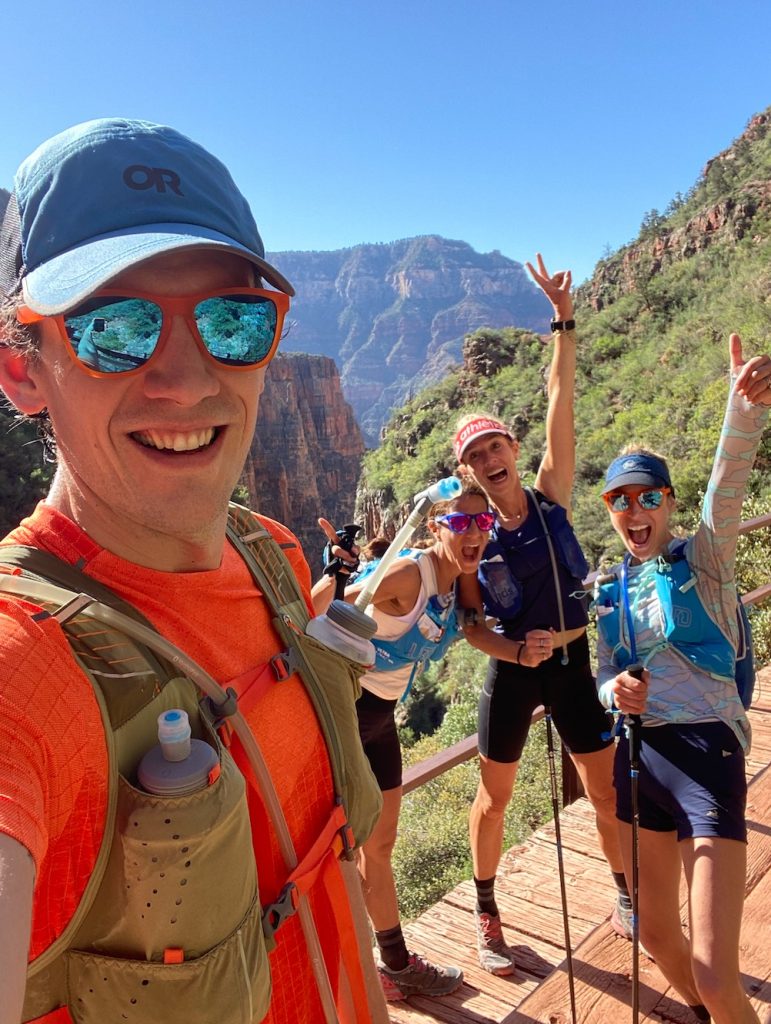 One of the bridges. 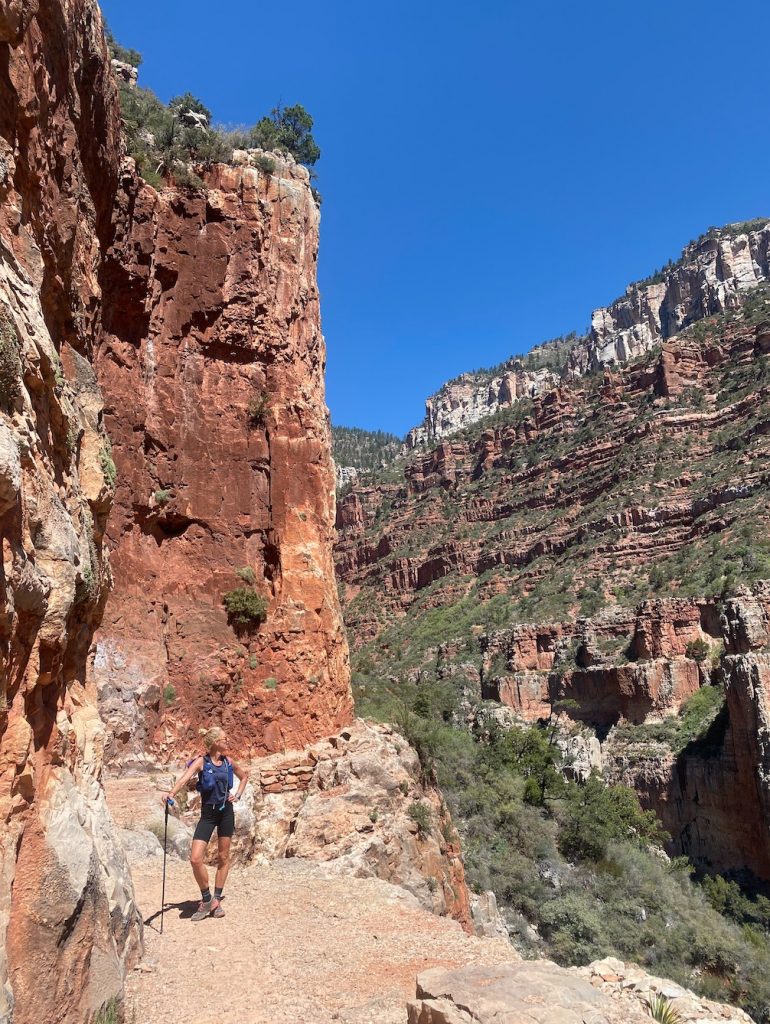 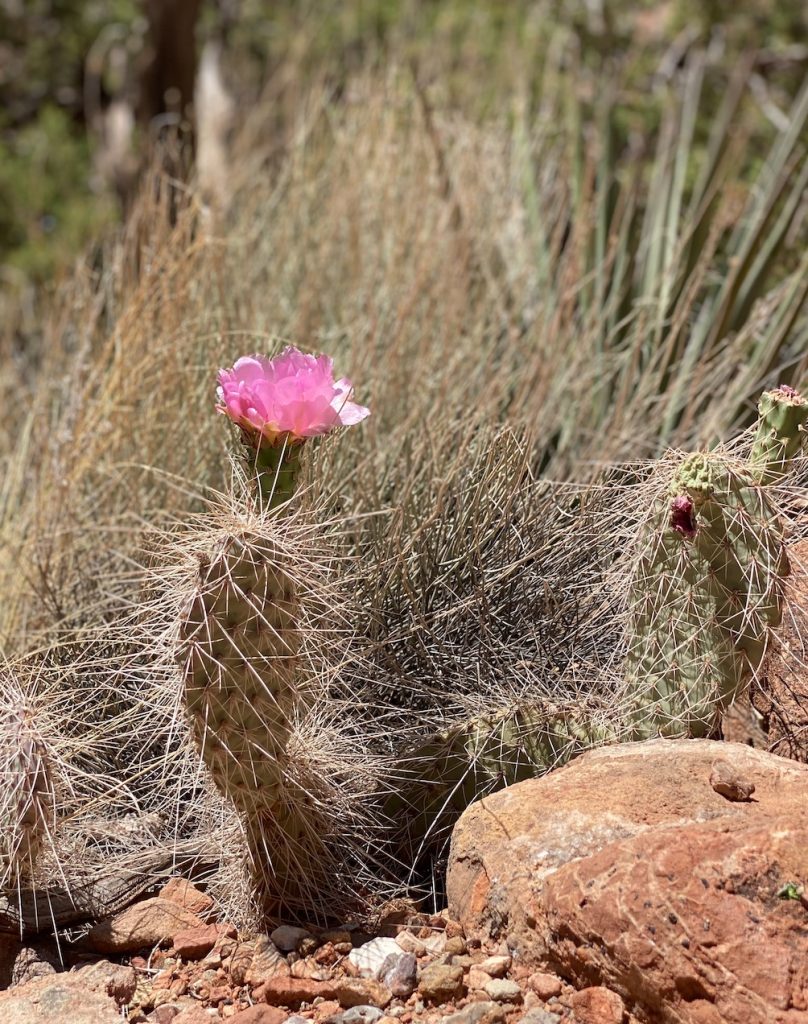 This is only one flower nature shot I took — but I still think of all the flowers I saw throughout. They came in every color — pink, red, yellow and purple. What was fascinating was that going out to the North Rim, there were no flowers, but as soon as we started our journey home, all the flowers were out for the day.

We knew that at mile 35, we would be reunited with our husbands who had hiked down the South Rim to meet us at Phantom Ranch. There is a Cantina there where they bought ice cold lemonade that tasted like heaven. At that point of the day, it was 106 degrees (!!!!) and very very hot. I felt great running down from the North Rim and still had energy to keep going. Unfortunately, at that point, two of our teammates started to struggle physically. 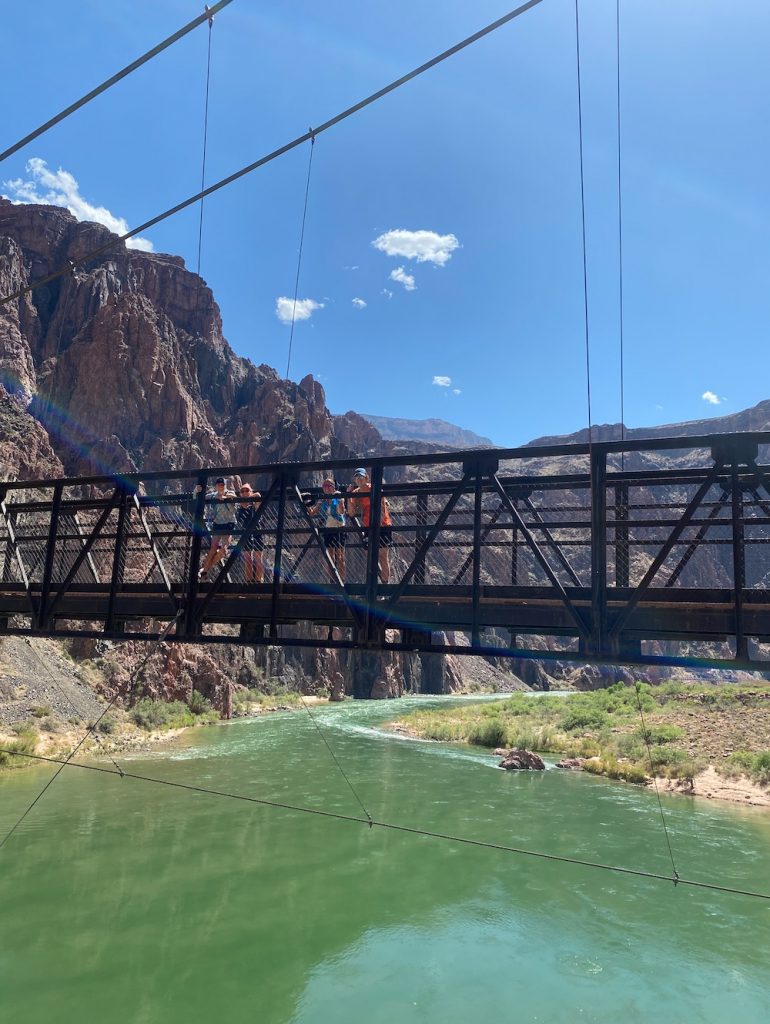 The Colorado Bridge on the way back. From here, it was UP UP UP UP. But this was also the point where things started going south with the two team members.

Two of our teammates were greatly affected by the oppressive heat and had not fueled enough in the first half. Even by skimping on a couple hundred calories made all the difference in the end. Both these teammates were nauseous, had cramps, and for an hour or so, it was assessing the situation and figuring out what to do. In the moment, I didn’t realize how serious this was for them and how bad it could have been. 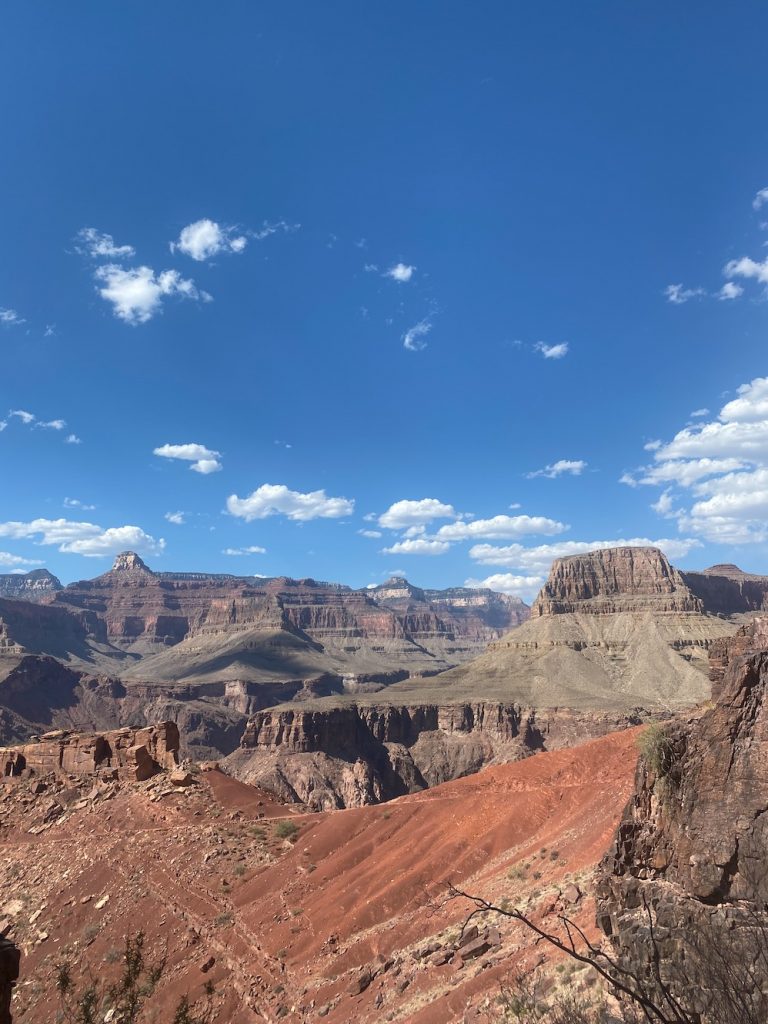 Almost there. The last 7 miles were grueling due to the conditions. It was one foot in front of the other, rest, assess, make sure the team members were doing ok, hydrate, fuel, go on. Any shade we got, we would stop. 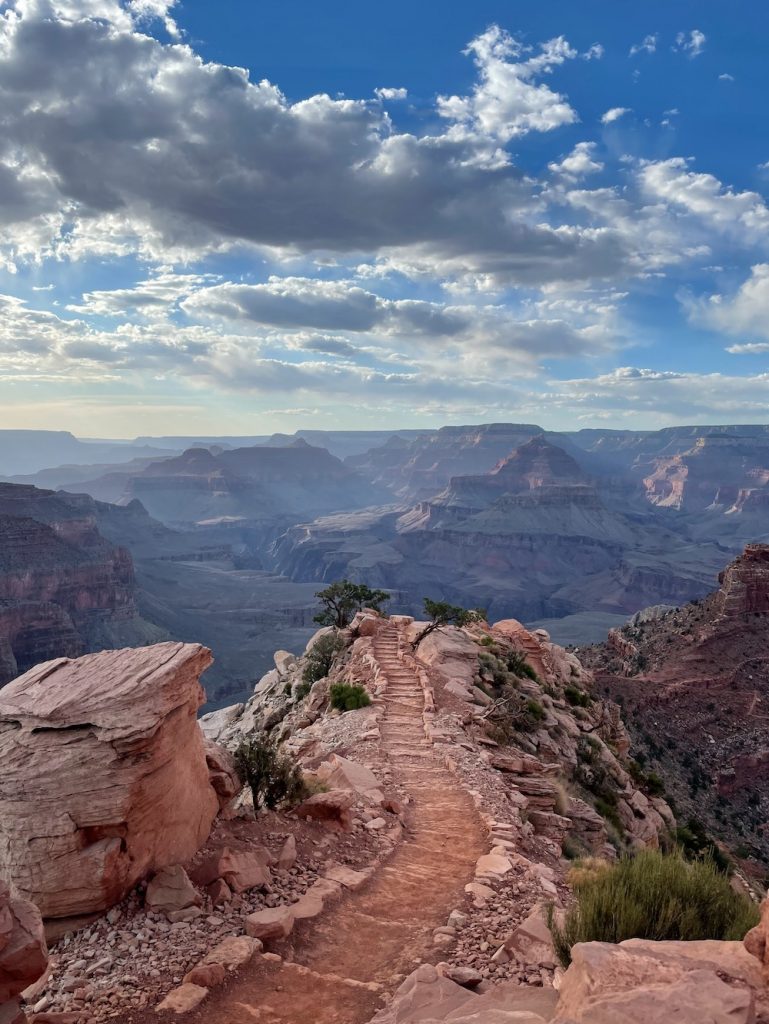 One of my favorite photos.

We knew we were almost near the end when we saw people in cute outfits (which meant that they had parked at the top of the Rim and were going for a moderate hike.) 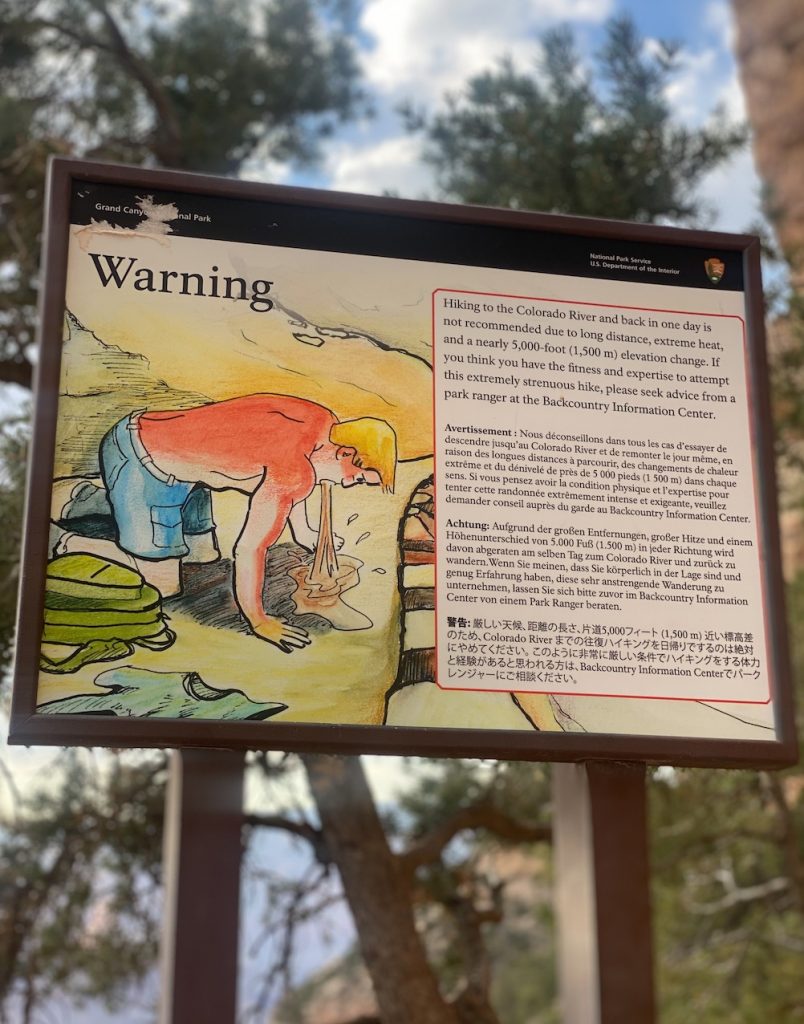 Yep. 3 miles from the top, we saw two women out of their element, with one tiny water, asking us how far it was to the bottom. They were not aware that soon the sun would set, and there was no way out but a huge hike uphill. We ended up telling a ranger as these women were not at all prepared, but the ranger said that he couldn’t do anything for poor judgement. 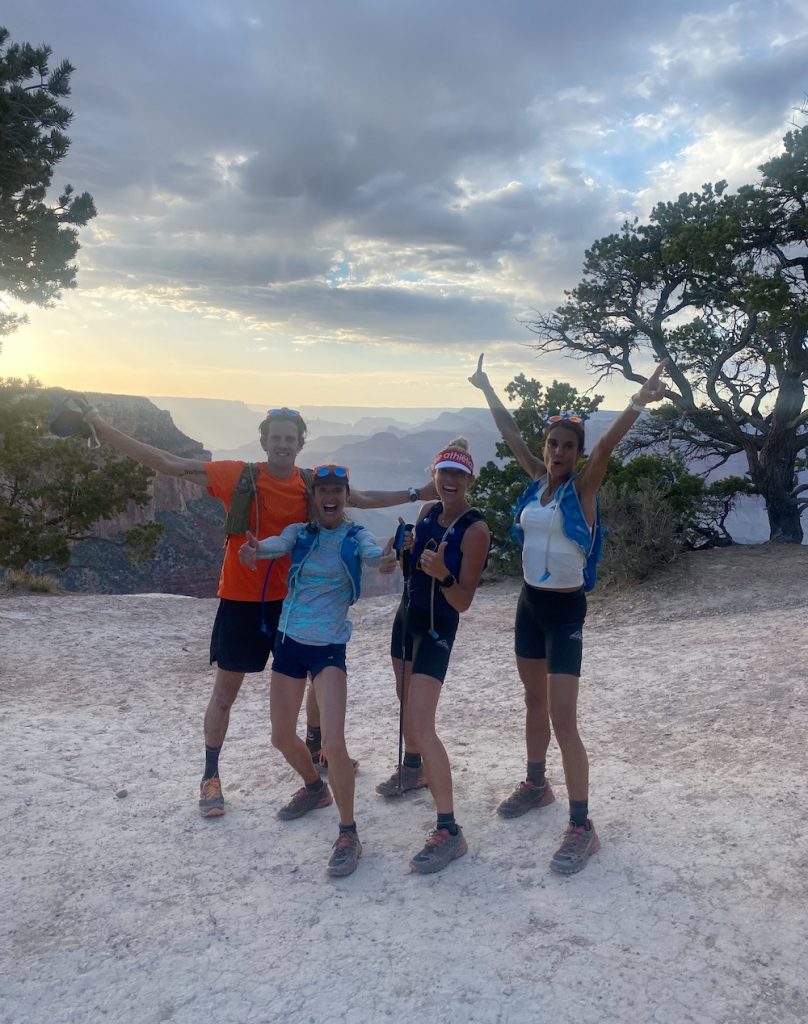 We did it! A long, wonderful and challenging day!

Of course, I could go on and on about all the gear, the food, the experience, as there is so much more to say. It was a very long, very powerful day. For me, I could have kept going. I still had the energy to run, and walk with no muscle cramps, soreness, or brain fog. My eyes hurt from the concentration of staring at the ground. Reflecting on how I felt, this R2R2R made me realize that this run was way easier than life itself, and that if you set out to do something, you can indeed do it.