Here’s Ken with a guest post.  Take it away, hubby!

The Josie Girl and I have had some really fun and adventurous culinary experiences.  Roberta’s Blanca tasting menu in Bushwick (coolest eating experience ever), Blue Hill Stone Barns in Pocantino Hills (educational and delicious), and even Pok Pok in Portland, Oregon (chicken wings + Oregon love).  We also try our own recipes as well, such as Beer Can Chicken (fun and easy, if not a little invasive for the chicken).  This one, however, takes the cake.  We haven’t eaten at Fishtail by David Burke on the Upper East Side since 2009.  However, we have been able to see what kind of food they serve due to the exposed garbage on the street we have seen over the last 5 years. 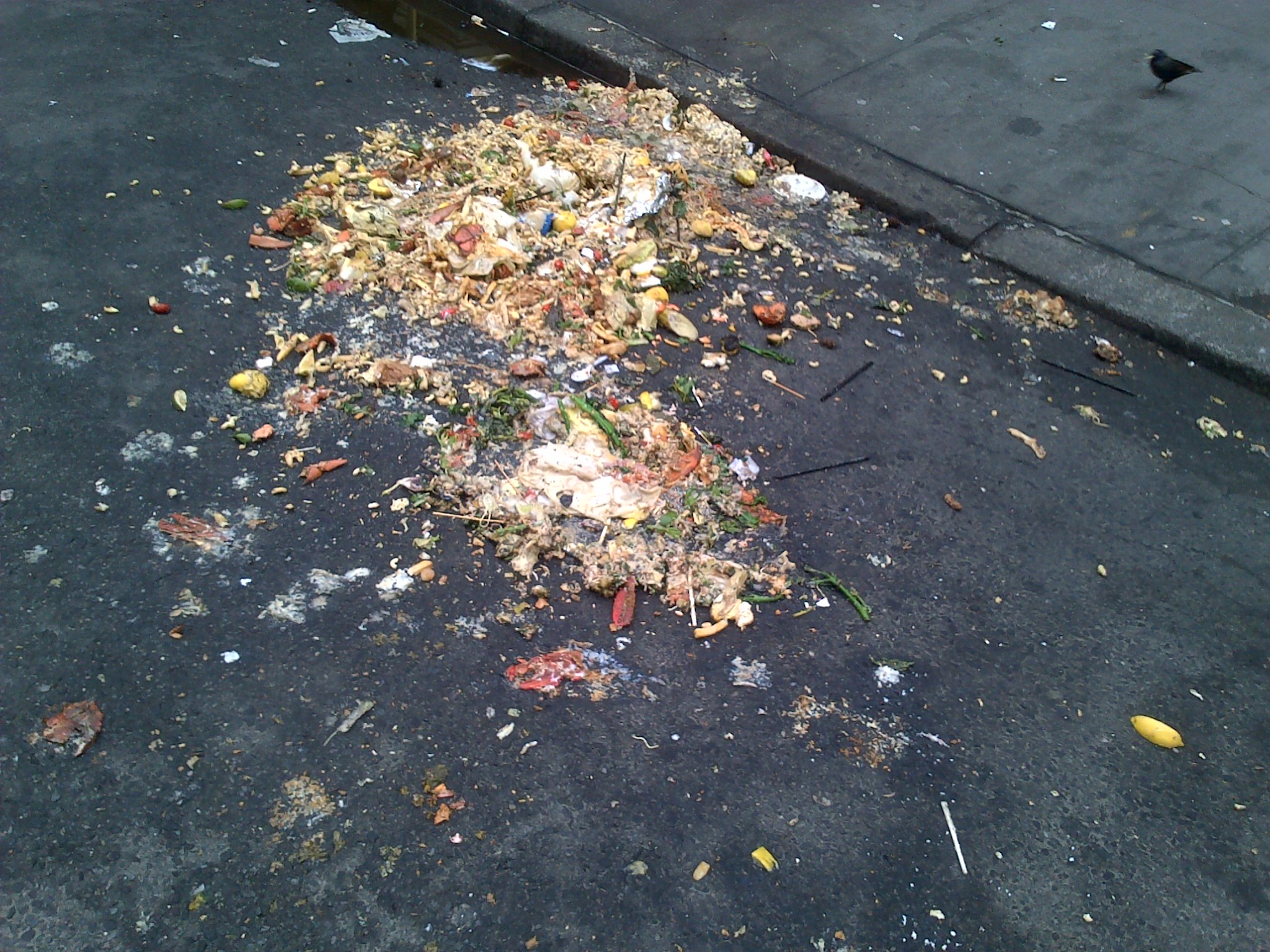 Since we moved in 2009, we have walked by Fishtail by David Burke almost every day on our way to the gym.  Soon after we moved, we discovered that there was exposed garbage on the street almost every morning.  It wasn’t like normal garbage.  It was usually random shellfish casings that almost seemed intentionally staged. 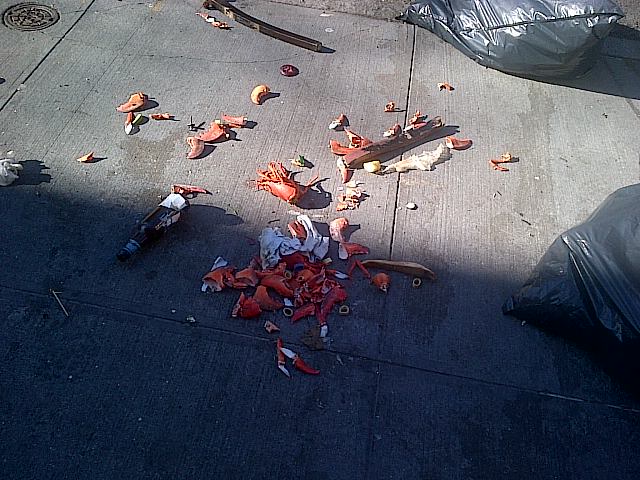 Lobster on the half shell from April 6, 2013 (note: we left the file names untouched so you can see the time stamps). 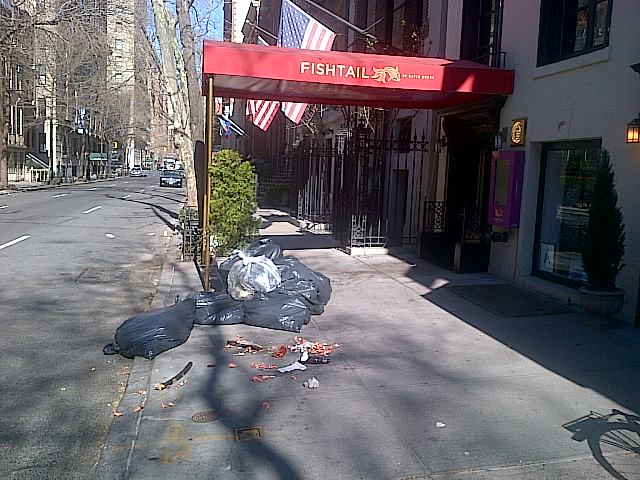 The strange placement/contents of the repeated filth led us to joke that a chef was making a statement on his or her way out every night.  Much like dogs pee on trees to mark their territory, we kidded that a chef dropped shellfish on the way out of the restaurant every night, proudly declaring: “That’s how you make lobster.  I’m out!”

When the trash went from a joke to… well, not a joke… we emailed management.  See the exchange below.  (You can click on it to see a bigger version if you can’t read the text).

The bottom email was from me to the manager in May, 2011.  And The Josie Girl replied on top of it.  I deleted the email, which she forwarded to me on Saturday (thus, the time stamp in the upper right). 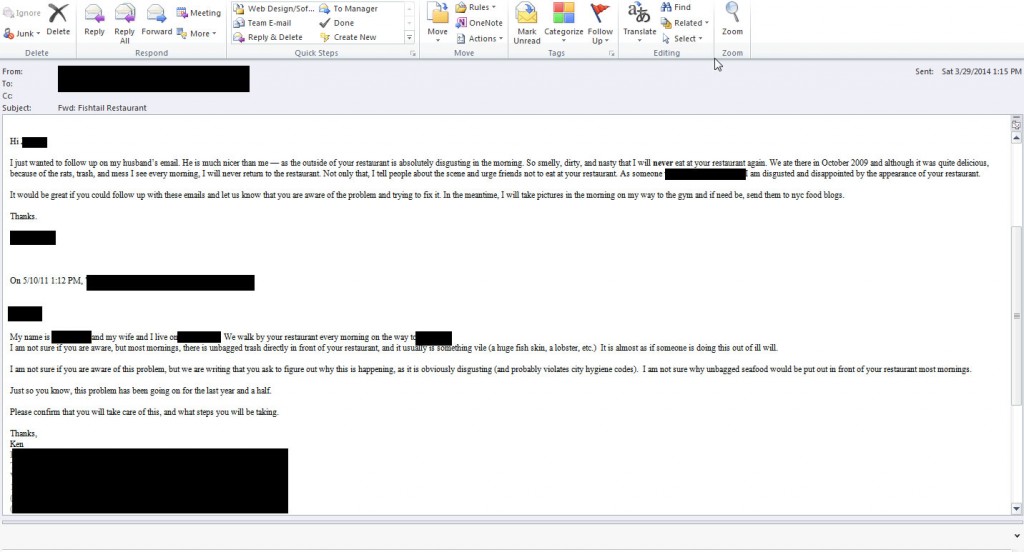 While we did get a call back, and the problem to some degree improved, it has come back in the past year.  So without further ado, more of our review! 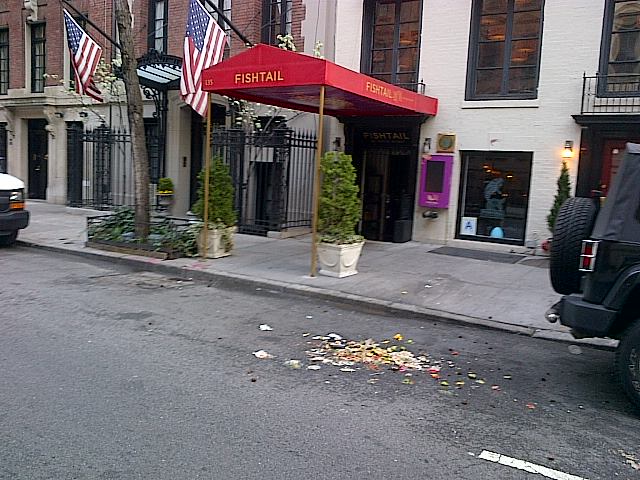 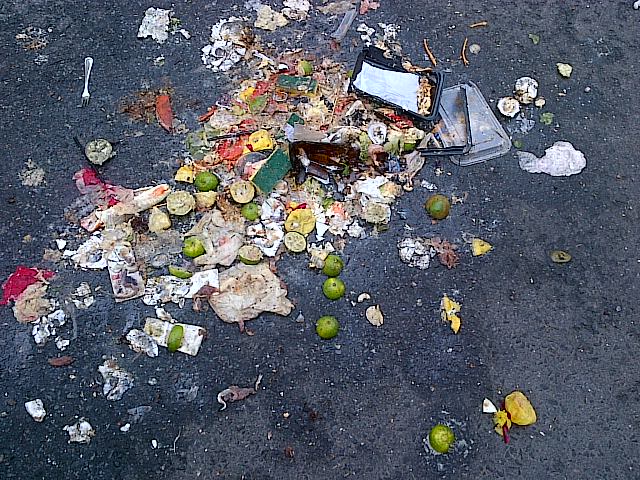 A close-up. I love lime, but it was a little too much citrus for my palate. Overwhelmed the other flavors. 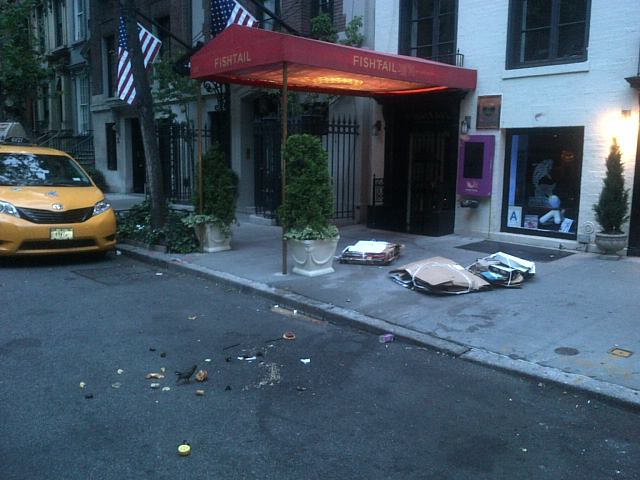 June 27, 2013. Very small portions today. Disappointed and still hungry.  We are glad they are recycling cardboard.  The placement of the stacks… not so much. 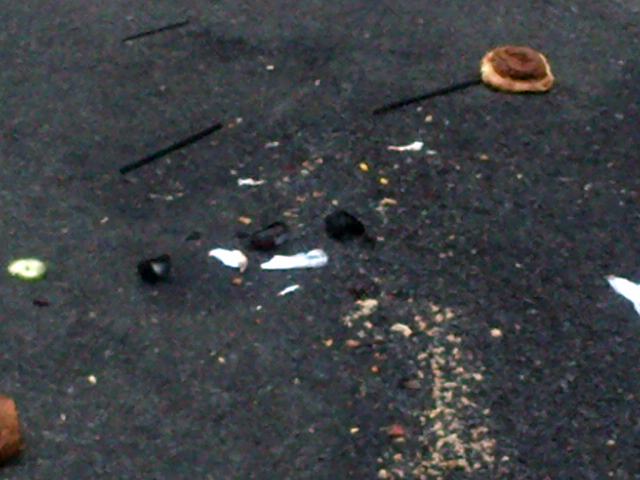 Close-up. Interesting combination of mussels… and a muffin. The pairing was a little forced and… let’s say uninspired. 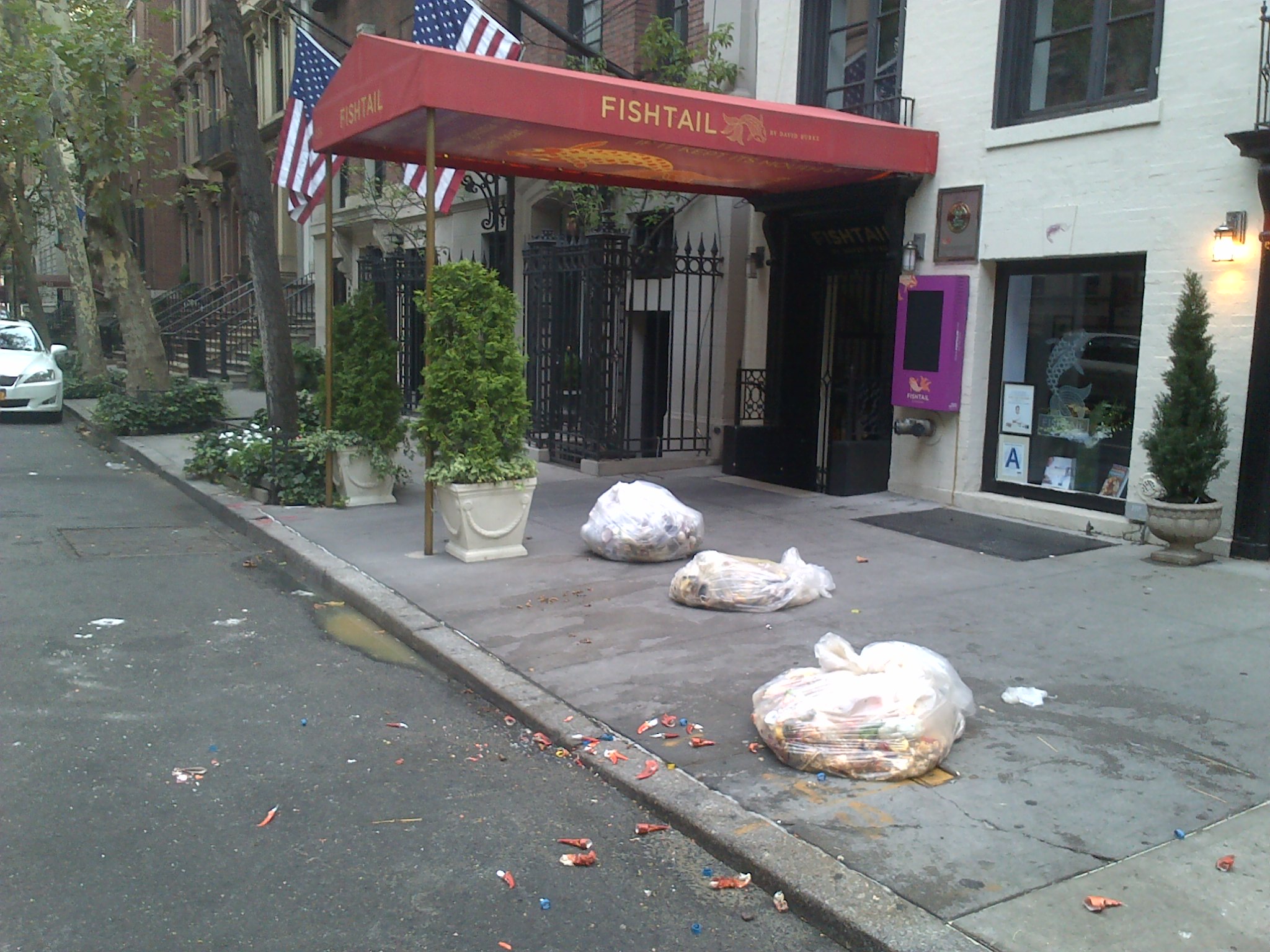 August 10, 2013. Empty claws garnished with three trash bags strewn over the sidewalk.  The presentation certainly was out of the box, (and affected people’s ability to walk on the sidewalk), but I left disappointed. 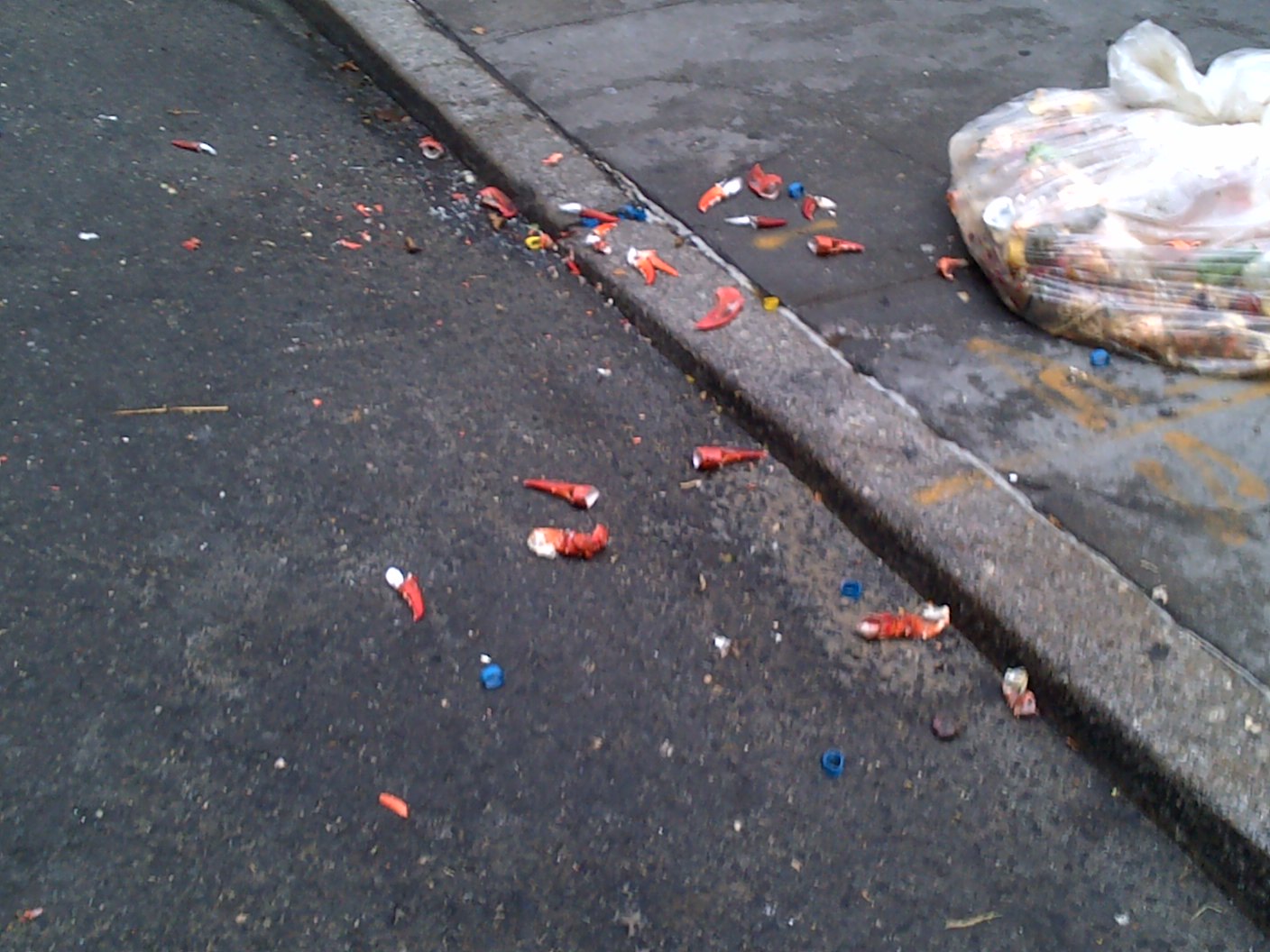 A close-up. (All jokes aside, can someone who has worked in a restaurant give me some explanation for this? Please??) 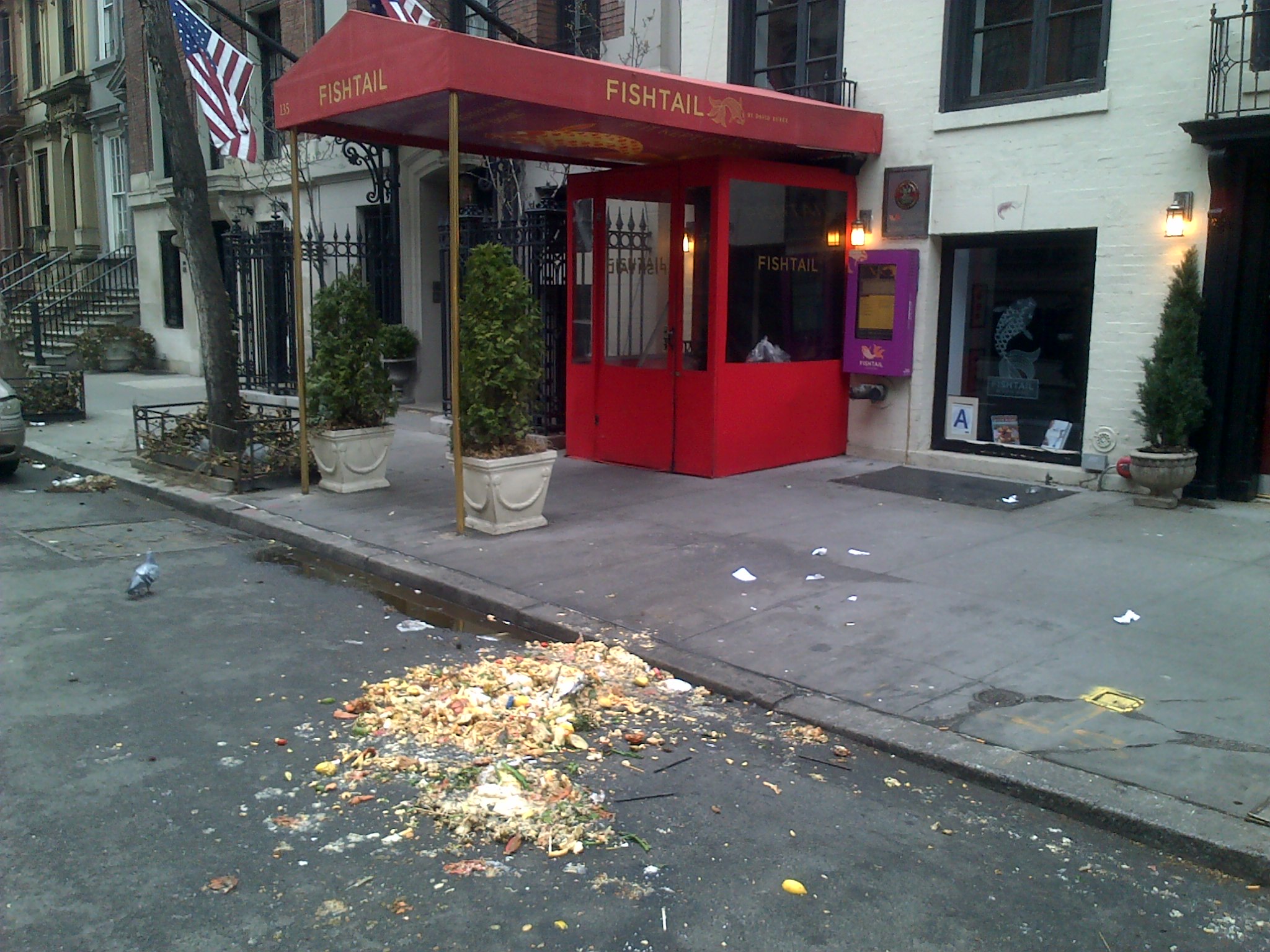 The grand finale. This past Saturday. All you can eat buffet!

“This is the best day of my life.” – Bird on the right 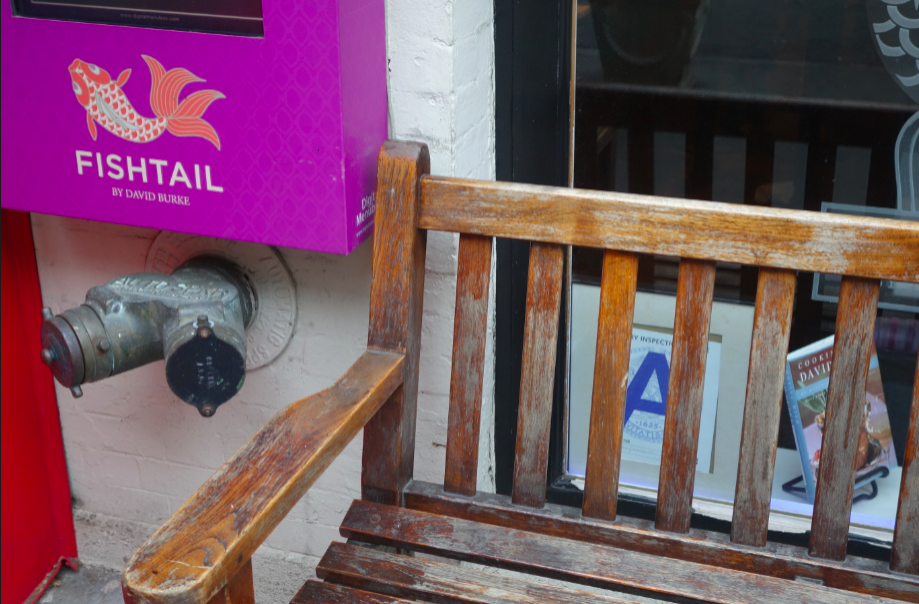 Look behind the bench… an A! Congratulations!

Request to the management of Fishtail.  Please get your act together.  This is beyond disgusting.  Please note that these pics are mostly from weekend mornings.  During the week, we both go to the gym very early in the morning (before it’s light out), so we haven’t documented most instances of your trash disposal practices.  This post would be 20 X as long if my blackberry had functional flash and I took pictures every time there was exposed garbage out (shame: I still have a Blackberry).  Regardless, this is a major problem that continues to be unaddressed.

An open letter apologizing to the neighborhood – posted on your front door so all patrons can see – would be the least you can do (in addition to, of course, making sure this doesn’t happen again). 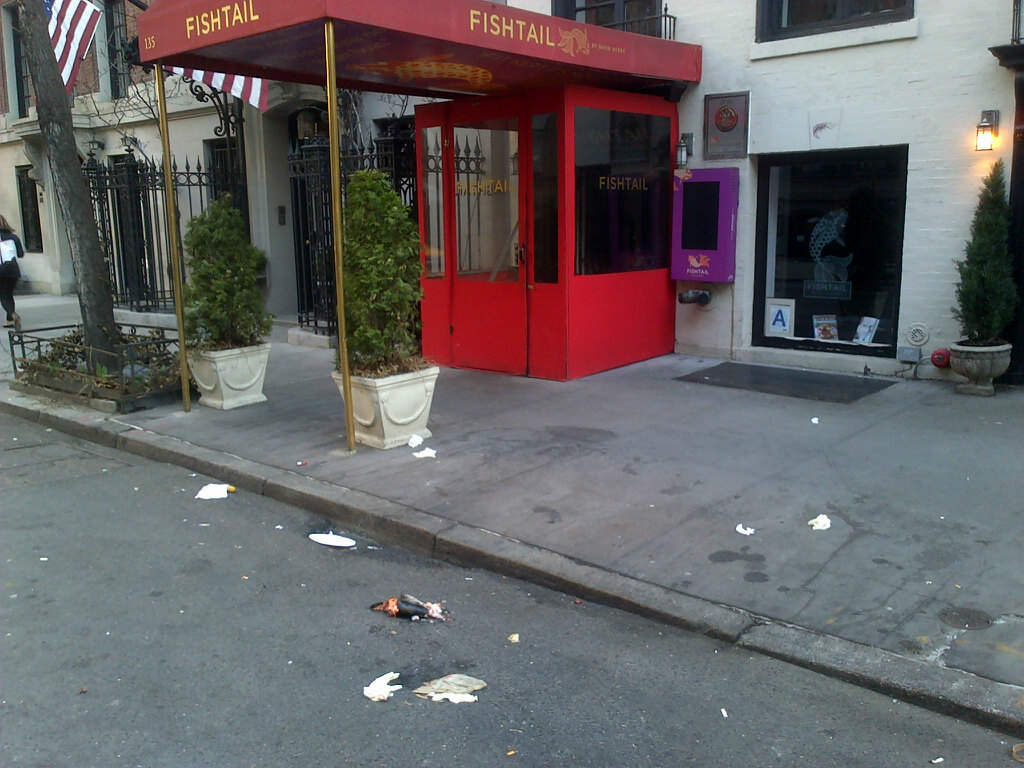 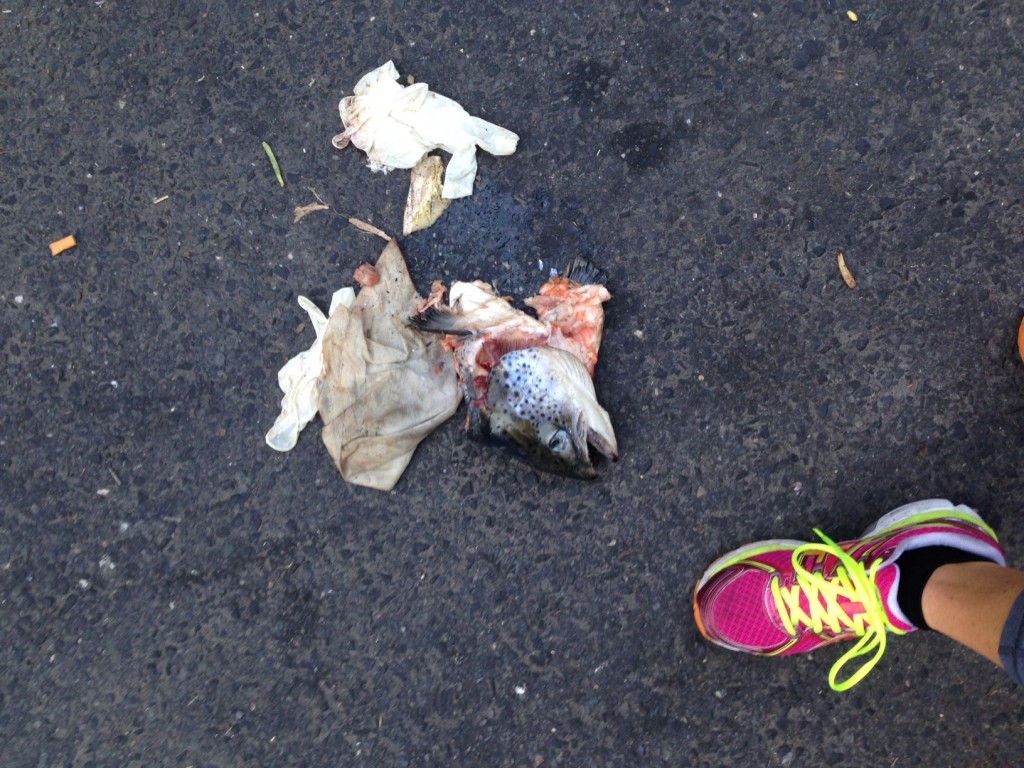 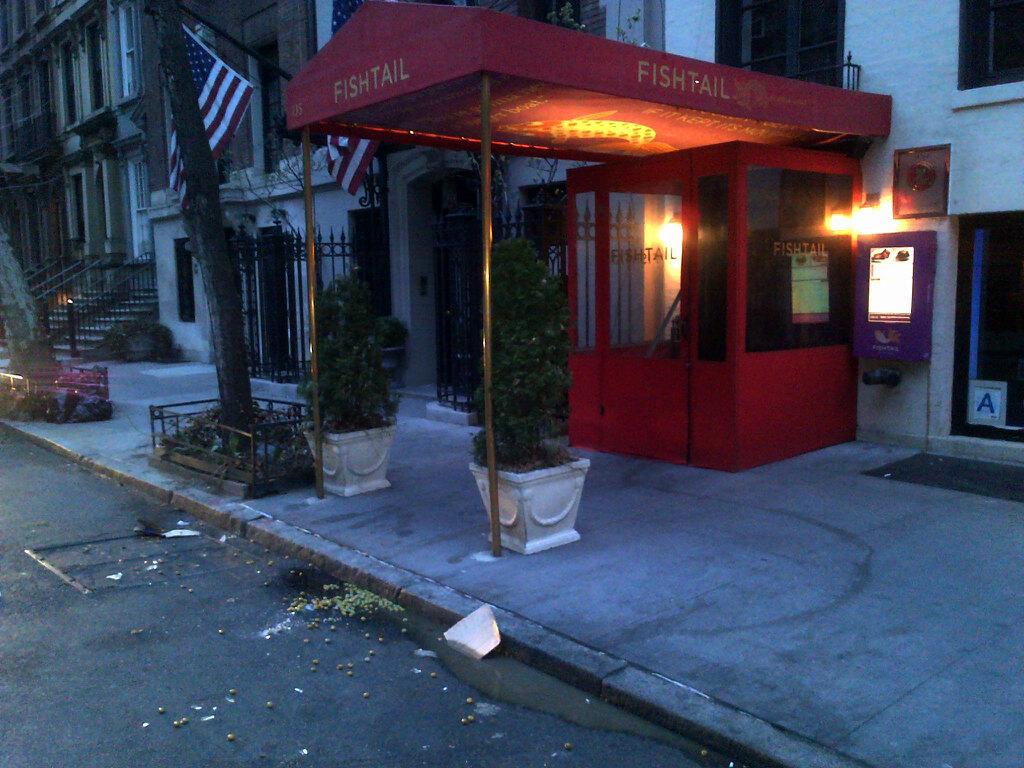 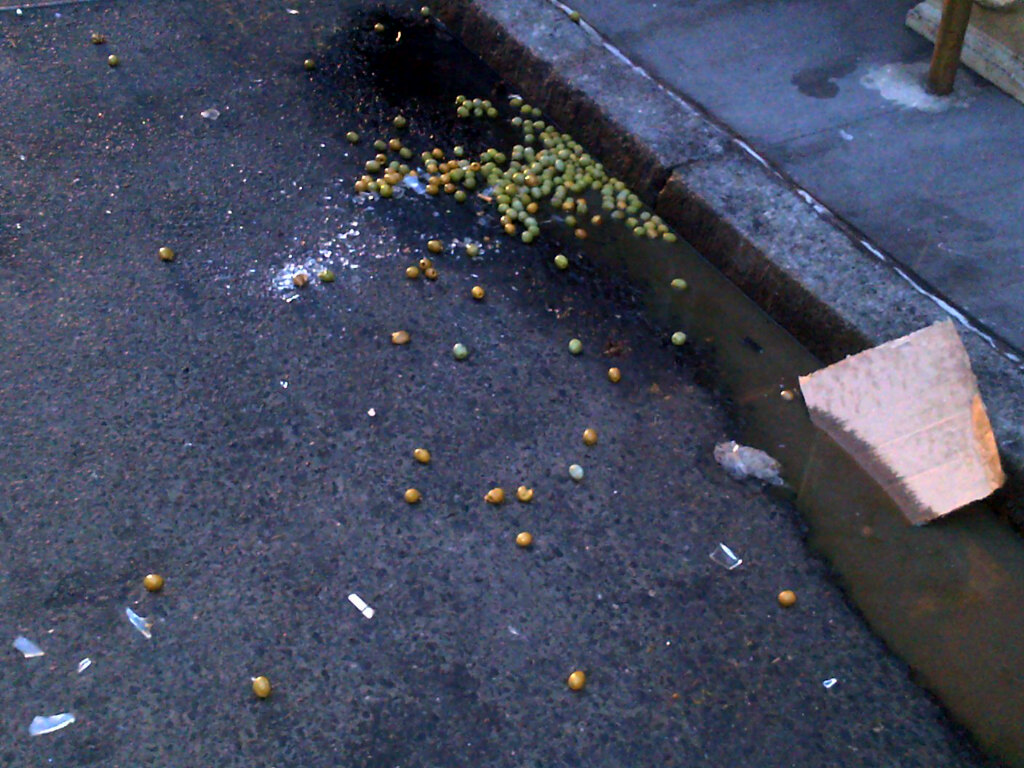 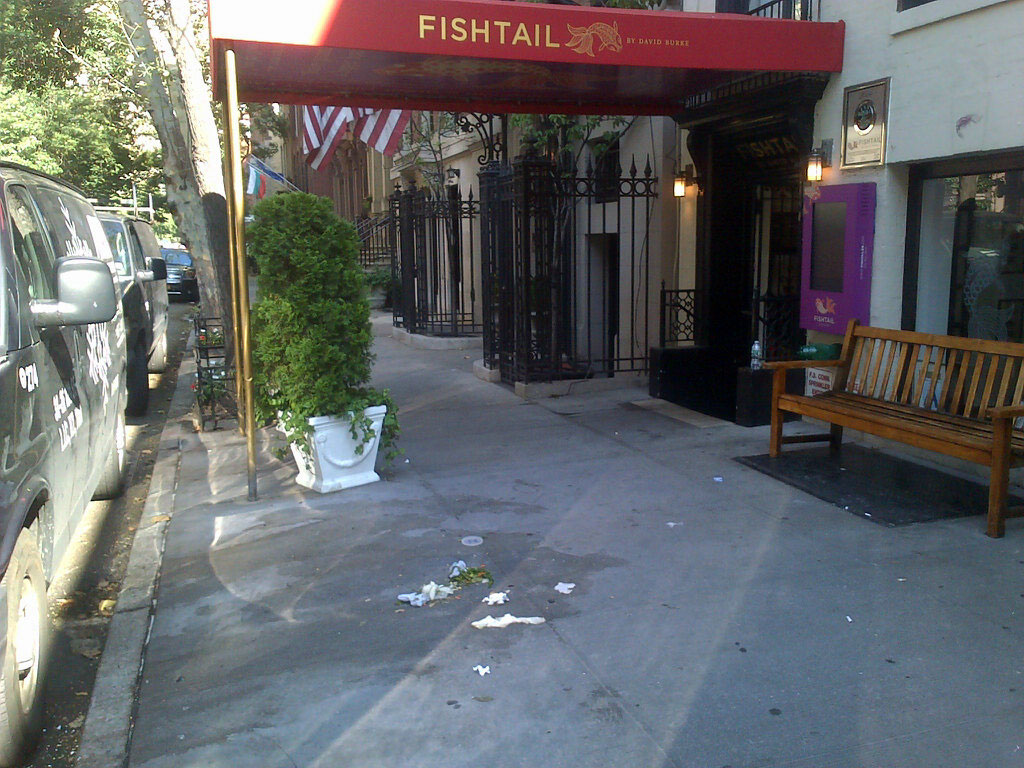 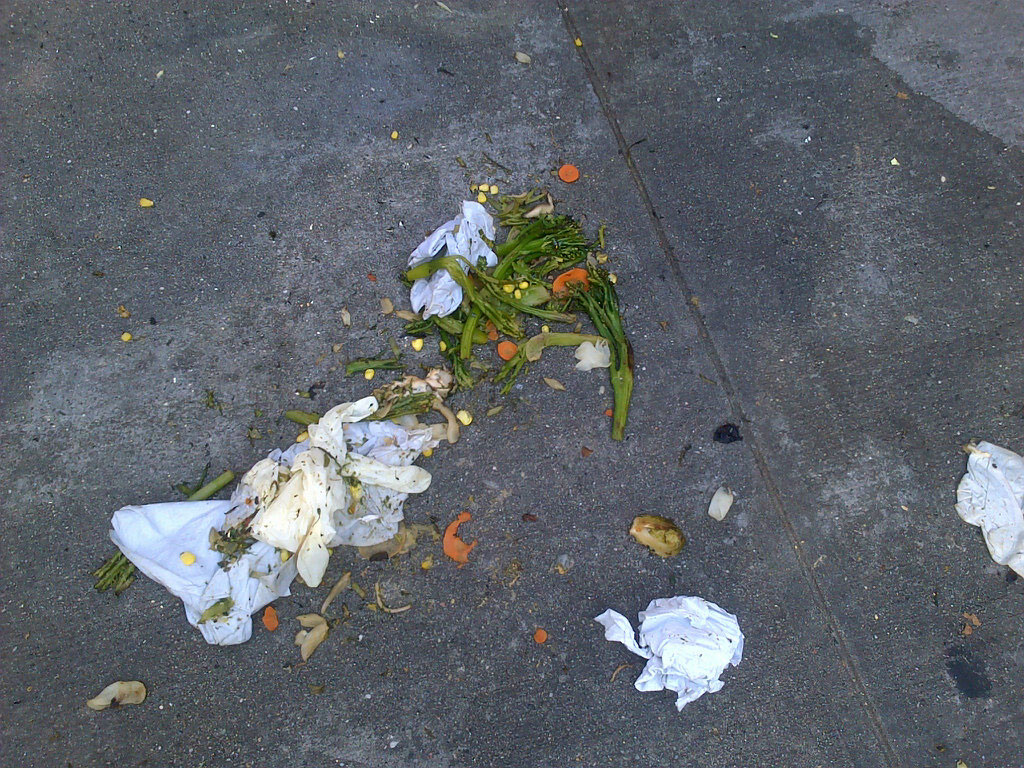