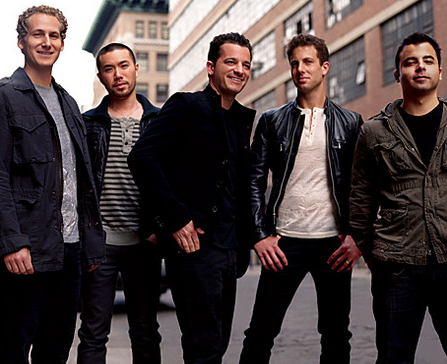 which led to the following Tweet (yes, my husband is a dork)…

.. which led to the following retweet…

… which led to O.A.R.’s  PR rep emailing Ken and telling him how great the video was. E-mails ensued, an idea of a band interview came up, and now, I have the pleasure of interviewing Jerry DePizzo, O.A.R.’s AMAZING sax player. 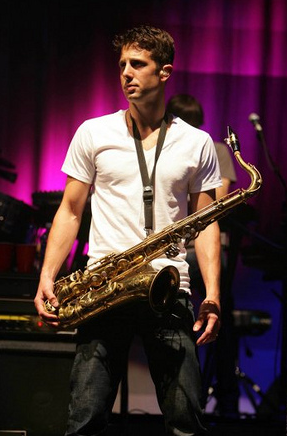 So, what’s it like being a rock star?  You guys have sold out MSG, and play packed venues all over the country. How do you explain to normal people what it’s like to play in front of thousands of screaming fans?

My job is pretty amazing…and I say that with perspective and appreciation.  Ten percent of the time I am running around on stage, screaming into a saxophone in front of thousands of people.  The other ninety percent of my life is spent in suburbia mowing lawns and taking my kid to soccer practice.  I think anytime someone can have a career being creative, things are going their way.

Did you always think you were going to be playing music as your career? When did you guys come to the realization that you could make a living out of this, and what was it like?

I always wanted to be a musician, but never knew if I had what it takes to make my “want” into an “am.”  I feel I have exceeded my potential in that sense.  The first time I felt the band could really make a go at being a full time band was when we went to Chicago for the first time together.  It was the first big city we traveled to that had a huge response to our music.  That was back in 2000.  I remember going into the restaurant where I waited tables at the time and telling my boss that I didn’t have to come back.  That was one of my proudest days.

What is your favorite Josie bra?

I’m a fan of whatever my wife is wearing.  She is a fan of the Posh Convertible Contour Push-Up Bra. She likes its versatility.

You have a wife who works in fashion and a young daughter (our friend Ashley developed a crush on you after seeing you play sax in person and was totally bummed to find that out). Has that been really challenging with your tour schedule? How does that work?

I like to think of it as how the tour schedule affects my family and not the other way around.  My wife and I both have very busy professional lives and we both could probably work every hour of every day.  We do our best to balance work with each other.  Our most important job is to be great parents to our daughter.  We don’t let anything get in the way of her regardless of how it affects us professionally.

You guys have a ton of amazing songs, but most people’s favorite is That Was a Crazy Game of Poker, which is one of the best live songs ever.  It’s also amazing how much you guys can mix it up and make it different every night.  Have you ever played a live show without playing Poker?  Will you ever?

We have played a few shows without “That Was A Crazy Game of Poker (“Poker” for short)” in the setlist.  Most of the times when we have done opening sets for other bands or when we have played multiple shows in one city, back to back.  We tried to play a few shows without it a few years ago.  After one of those shows, I snuck out front afterwards to gauge the audience’s reaction.  People were so genuinely upset by not hearing that song that it just doesn’t make sense to play a show without it.  People come to our shows to have a good time and to feel good about themselves.  We are not doing our job very well if people leave angry.

What is your favorite Josie Pajama?

Your sax playing is amazing, but by nature of O.A.R.’s music, you aren’t always “on”… there are long periods of songs where you aren’t playing.  How do you decide what to do when your idle?  I think I would be embarrassed that I would look awkward doing nothing, and would just leave the stage, and come back for my solos.  Thoughts? (This question was from my husband.  Truth be told… almost all of these questions are from my husband).

I’ve learned that what I don’t play is sometimes more important than what I do play.  I’ve almost mastered the art of performing while not playing. There are a few tunes that have long periods without the horn, so for those, I disappear behind the stage and pop out for a solo or two.

You guys have stayed authentic and true to your jam-band roots, which is probably a large part of the reason why your following is so loyal.  But you have also come out recently with some more Top 40-type hits.  Has it ever been a challenge trying to balance the two?

I don’t think there needs to be any balance as long as we write music that comes from our hearts.  I feel people connect with the honesty and sincerity of the creative process and as long as an artist creates from such a place, the music will speak and connect with people.

Your lead guitarist Richard On is Asian-American.  Does he realize he is living my husband’s dream, and if so, how does that affect him on a day-to-day basis?

Richard is Asian?  No one told me.  Seriously, it’s ok, I want to be Richie when I grow up too.  I love that Richie and his ethnicity are an inspiration for people.  I hope that people realize that you can do and be anything regardless of where you come from or what you look like and if people connect with that through Richie, that’s fantastic.

You guys all seem to get along really well.  Have there ever been any issues that have led to major conflict?

Not yet.  Fingers crossed.  In all seriousness, we do get along very well and have never had any major issues.

You have notably been great about giving back, and have worked in particular with the Iraq and Afghanistan Veteran’s Association (IAVA), which was started by Ken’s friend Paul Rieckhoff.  Can you talk about your involvement with that group and how that came about?

I feel it is the moral obligation of every American to lend support to our troops and veterans.  My brother serves in the Texas National Guard and one of my very best friends flies an A10 for the Air Force.  I want to show them and every other service member how much their efforts are appreciated.  The IAVA is an amazing organization and Paul’s efforts to raise awareness and gather resources for our veterans is nothing short of outstanding.  We have teamed up with the IAVA on several occasions and every one of them has been a very rewarding experience.

Remember when you played Poker in San Francisco this January and Matisyahu came out for the end of it?

Matis is a great guy.  Nothing was preplanned.  He just jumped up there and did his thing.  It’s always nice when a non-planned plan comes together.

Thanks Jerry, and thanks to O.A.R.!  We look forward to seeing you live next time you are in New York!