This past Saturday, Ken and I celebrated our 5th year wedding anniversary. It is so wild to me that we (a) have been married for 5 years (2) have two kids and (3) are now officially a family of four. Time has flown by so quickly, and yet so much and so little has changed (is that possible?). It seems like only yesterday, I cried over wedding details, we danced all night long, and we basked in the glory of being newlyweds on our honeymoon. Our wedding planning was far from stress-free, but in the end, it was one of the best days of my life.

Ultimately, I married my soulmate, Ken Natori. Sure, marriage (and life) are not always smooth sailing — everything takes work.  But Ken is my everything and I love him so dearly. Not only for what he has given me (children, marriage, love, stability, a family, everything), but for who he is and the life that we have together. I am so truly happy that we are together and look forward to continuing our journey together as a married couple. Without him, I would not be who I am.

Here are some of my favorite pictures of our wedding. Flashback to June 16th, 2007. 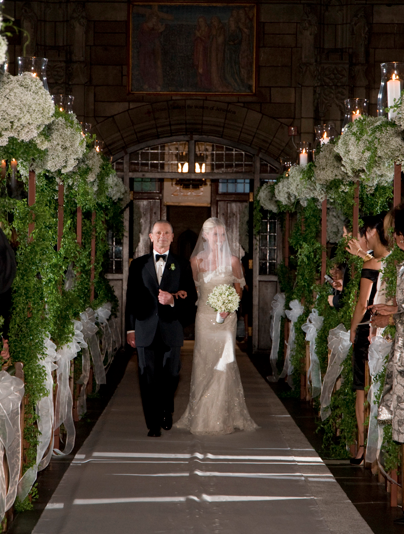 My papa. At first, I wanted both parents to walk down the aisle with me, but then I realized that people would not be able to get a good enough look at my dress if I was flanked by both parents on my sides. I love how strong and poised my father is. Always a soldier. I also really like how my good friend Irene is in the corner of the picture waving (pretty black dress lady). My beautiful dress was designed by my mother-in-law, Josie Natori! 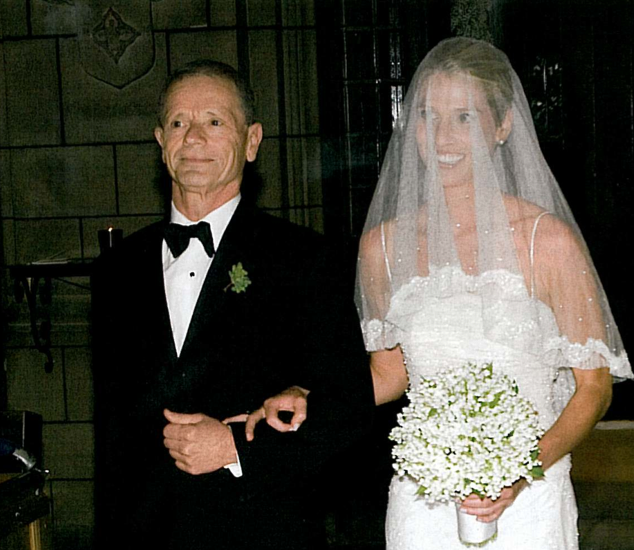 ZOOOOM! Isn't my papa guapo? One of my favorite parts of my wedding ensemble was the veil. I loved the lace at the bottom as it added a sense of soft surprise. 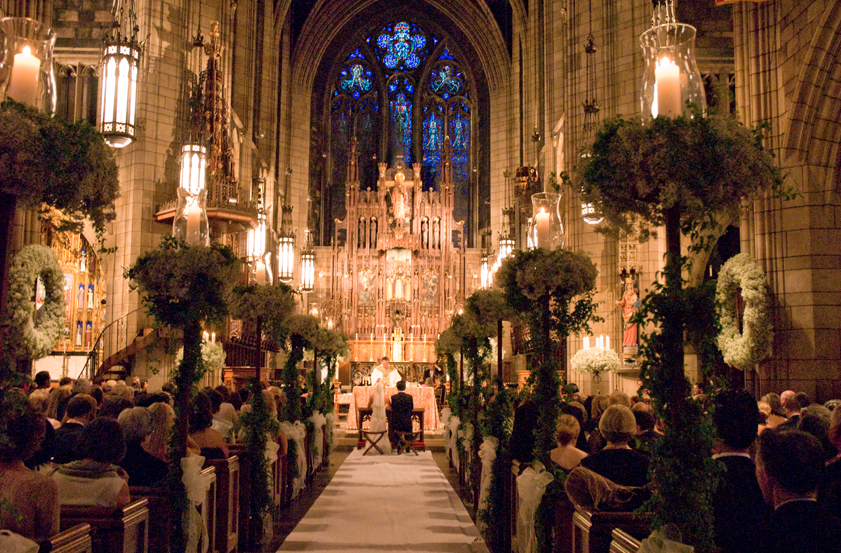 The church. More candles, flowers, and white pouffs than you can ever imagine. It was like entering a church of white (which, is exactly what it was). So breathtaking and beautiful. Also, the smell of the church is still vivid in my mind. 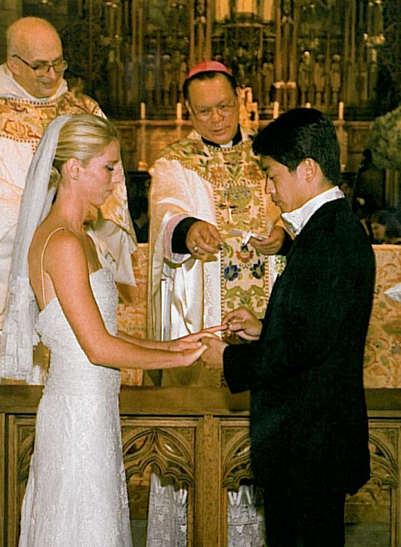 The nice jew that I am, one of the highest ranking members of the Filipino Catholic Church was flown in from the Philippines for our wedding. Although we were married in a Catholic Church, the ceremony was more about our love than religion. 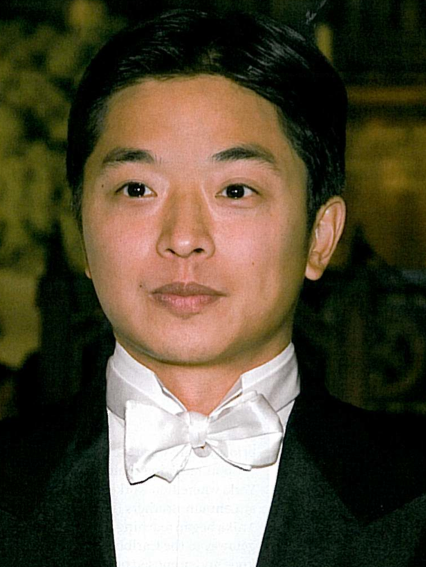 CAN YOU GET ANY MORE HANDSOME????

The bridal party. Every one wore white column dresses, all that were made by my mother-in-law. One of my favorite memories from the day was when my bridesmaids and I were leaving the hotel to go to the church and all 10 of us were dressed in white with our white bouquets and tourists kept on taking pictures of the "10 brides." 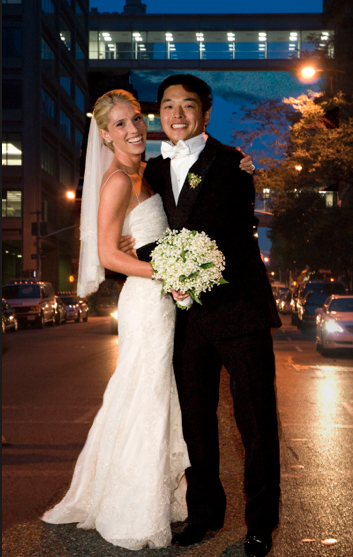 The newly married couple out on the street post ceremony and pre reception. After the hour long ceremony, everyone hopped onto a bus (to take them 5 blocks) and were given mini champagne bottles with straws to guzzle down and get the party started. 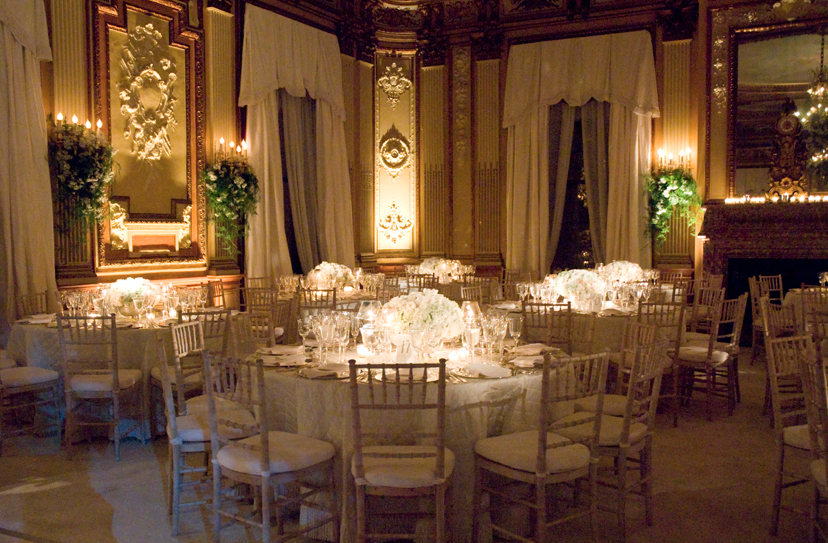 The reception was all white too. Our wedding planner was David Monn, one of the Natoris' best friends. To say that he has class, style, and an amazing eye would be the biggest understatement ever! Even the carpets were replaced with all white velvety rugs.

A birds eye view of the reception. So glamorous and SO UN-EUGENE. But oh-so-fun. I will never be that glamorous, swanky, and sophisticated again in my life! 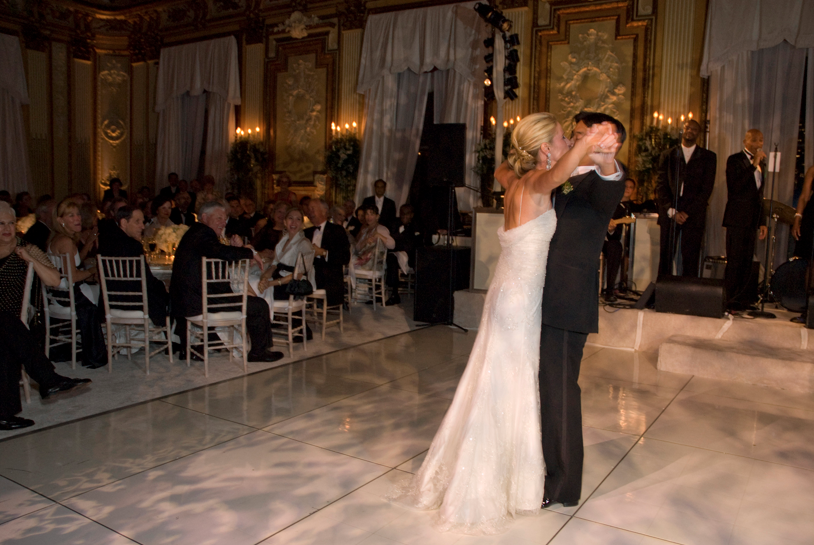 Ken and I were the geeky couple who took dance classes because we were afraid of our first dance. We spent weeks learning how to dance for a 2 minute song. Of course, the most memorable part was when we stopped our "formal dance" and started pretending that we were fishing and free danced to one another. Hot stuff, I tell ya. 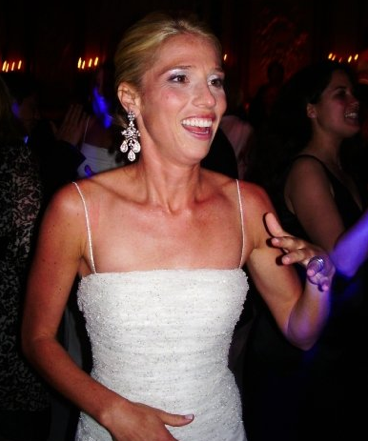 For the reception, I changed my make up and earrings for a more PARDY look. These earrings are obviously not owned by me, and were lent to me by my very generous mother-in-law.

Our wedding was a blow out occasion and such an amazing and emotional event. Ken and I both were in tears the day after en route to our honeymoon because we were just so touched and honored by the love and support that we felt from our friends and family. We loved every minute of the ceremony, reception, and all that everything represtented behind it. We were now bound together as husband and wife, beginning our journey together as a family. And  look at us now….five years later; fatter, bigger, more responsibilities, stricter schedules and obligations, and a life continued with love and dedication ahead of us.

And for those of you who are curious on how we met, this is Ken’s version, written right before our wedding (he didn’t want to do this, he had to in order to get into the New York Times Wedding section):

Anika and I first met face-to-face in March, 2001, when she and her brother Giora, who was one of my best friends at Amherst (Class of ’98), needed a place to stay in New York.  Anika, then a senior at Pomona College (Class of ’01), had been accepted to Masters Programs in Education at both Stanford and Columbia.  She came to New York with Giora to visit the Columbia campus and learn more about the school.

While the “friend meets friend’s younger sister” situation can lead to unappreciated humor / protectiveness / all of the above, this particular meeting had added weight and significance.  Ever since I had met Anika’s parents (Maxine and Andrzej) during Giora and my senior year at Amherst, they had always joked (to me, Anika, and whoever else would listen) that their daughter and I would one day end up together.  Maxine had even joked about how our wedding (Headline: Polish-Mexican-Jewish-Daughter of West Coast Academics Marries Japanese-Filipino-Catholic-Son of New York Socialites) would have to be chosen as the Times’ Wedding of the Week.

Despite the weight of parental expectations on our shoulders, that weekend in March, 2001 was somewhat uneventful in terms of our relationship.  A number of Giora’s friends from the Proskurowski hometown of Eugene, OR were in town, so the weekend was largely spent roving around in big groups.  There was a walk across the Brooklyn Bridge, a day-trip to Prospect Park, a party in Brooklyn… but given the big group setting, and especially given the presence of numerous “friends of big brother”, there was little opportunity to spend time together.

While Anika and my paths’ didn’t cross for the next two years, the legend of our eventual union remained among Proskurowski friends and family.  Then came the catalyst.

In May of 2003, I got accepted into Stanford’s Graduate School of Business.  Anika had decided on Stanford as well in 2001, but decided to defer admission for two years so she could travel, and take some time off between her undergraduate and graduate programs.  The stars were aligned.

Anika’s program started before mine (June vs. September), and before my arrival, there apparently had been much discussion among the family over who would contact whom first.  Would Anika be aggressive and get in touch as soon as I arrived?  Would I contact her?

Little to my knowledge, my decision to be the “friendly friend of big brother” and ask her to dinner would represent the real first interaction with my future wife.  Our first September dinner turned into a second… Anika started to meet friends I was making at business school… and the grounds were laid for the start of a fruitful relationship.

That said, we by no means catapulted ourselves into serious dating immediately.  Somewhat held back by a) the inevitable awkwardness of dating a friend’s sister (regardless of family support), and b) a sense of obligation to make the most of my business school experience, I was hesitant about letting things proceed too quickly.  Anika was, after all, one of my best friends’ sister, and the last thing I wanted to do was to proceed without caution, and potentially create irrevocable harm.

Despite my early reluctance to commit, our relationship grew.  By the time fall turned into California winter, all hesitations I had evaporated… Our relationship blossomed.  After I graduated from Business School in June ‘05, we moved to New York together, where we overcame transitions from West Coast to East and graduate school to the working world.  In April 2006 on a vacation to Nevis, we took an after-dinner walk on the beach.  I proposed, she accepted, and the rest is history.

*** I am one lucky girl and feel so honored/privileged/happy to have found someone as amazing as Ken. I love him with all my heart. Thank you for allowing me to share this with all of you. I am so truly blessed and thankful for him and our life.

Have a great week.